ALL OF THE CHOCOLATE!!!

A few weeks ago was the one-year-anniversary of last year’s Ash Wednesday. Who cares, I know.

It was also the one-year-anniversary of my decision to quit sugar. Woot woot, I know.

Because of that, like I said back when I wrote about the chocolates I got from my dear friend in Luxembourg, I ate a bunch of sweets that day. Everything I had kept (in the freezer, just in case) over that one year, I got out and taste-tested on the evening of February 14th. Don’t worry, this makes it sound like a lot more than it actually was.

Here’s what I had: 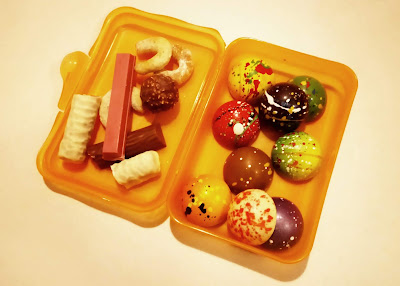 I’m going to now go through all of the treats, in order of eating, and rate them on a scale of 1-5 of whether keeping and then eating them was worth it or I think I would have been better off continuing to ignore their existence. 5 means “ohmygodthiswasperfect”, 3 means “whatever, take it or leave it”, 1 means “I wish I hadn’t just done that…”. 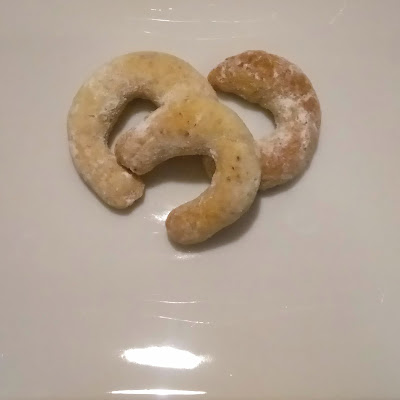 My grandpa used to work as a baker and Vanillekipferl are one of his specialties. Every single Christmas, my grandma would bake all kinds of sweets, but never Vanillekipferl, because they were his and his alone. Now, I’m the one bringing Christmas cookies and stuff to him and my dad, but he still makes Vanillekipferl. I make them too, but his are better. This Christmas, he wasn’t going to bake at all, but then spontaneously did it anyway. My dad was so kind as to bring me a few and I went ahead and froze three.

They were the first thing I had, because I wanted my palate to be untarnished by any other flavors and they were heavenly. It didn’t matter at all that they’d been frozen for a few weeks, they were still perfect. Melt on the tongue quality, just delicious. I don’t know if he’s going to make them again, because already he wasn’t going to, but I’m lucky even if they were his last ones to have had them at all. They’re what I strive to create when I make them – and when he tried this year’s batch he said I could take over. Heart exploded with pride and happiness, obviously. 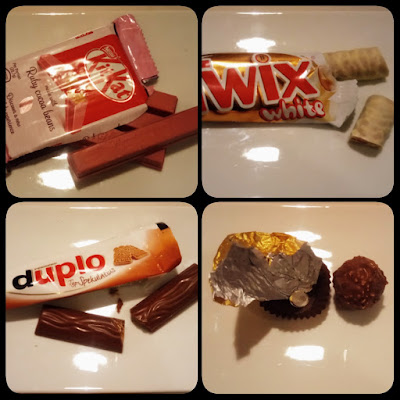 All of this stuff was OK. The pink KitKat was a limited edition that I wanted to try because of the different cocoa used. I thought it would taste special, but all I could detect was a mild tanginess, which may well have been my imagination trying to create something for me (everybody told me it tasted just like any other KitKat but with white chocolate…). That leads me to the white Twix, which I wanted to try because it was a limited edition and I was curious about whether the “insides” would taste different with another kind of chocolate around them – they didn’t. I know it’s now regular stock and no longer a limited edition, but they made that announcement after I had already got mine. The Duplo is special because it’s a limited Christmas edition from Germany and I hadn’t seen it in any supermarket in Vienna. The Christmas in the Duplo comes from the fact that it’s supposed to be Spekulatius-flavored. I say supposed to, because it didn’t really. It was just sweet. Which applies to all of them, the being sweet. This was obscenely sweet, though, so therefore the extra mention. Last but not least (I’ll tell you who was least later) was the Ferrero Rocher. Not a limited or special edition, not something only available outside the country, not a gift from anyone. But I used to love those things and I have them at home for visitors, so I added one to my collection. 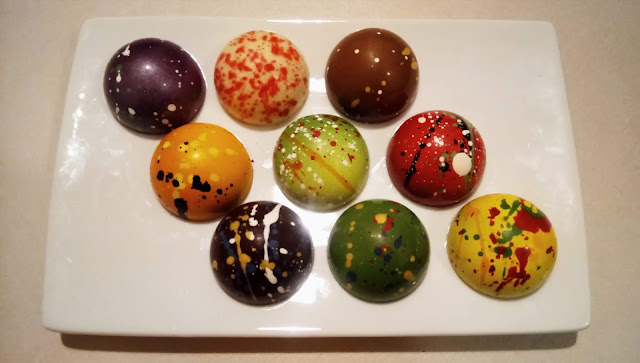 This is the chocolate my dear friend Nai gave to me in Luxembourg, from Luxembourg, as a souvenir to remember our trip to Luxembourg. I had no idea what was in them beforehand, so each one was like a box of chocolates, you never know what you’re going to get. I figured it out by taste for most of them, but because the sweetness was the main ingredient for all of them, I didn’t catch each flavor. Here’s what I think they were, from top left to bottom right, although I have to say “alle Angaben ohne Gewähr” because I wasn’t 100% sure with any of them, except the caramel one.

Important notice for those who think I’m crazy: of course I didn’t eat all of that! I tried and tasted and then shared what was left with my very-happy-to-get-to-try-them-too mom.

I like that I tried all of that candy, because a) it was mostly very good (especially the Vanillekipferl and the Lux’ian chocolate) and 2) it gave me the opportunity to make a more informed decision about how to proceed moving forward. That’s because the second item on my to-do-list for that day was to start thinking about how I would continue along my no-sugar path, to make a decision over the next few days. Should I continue with zero? Should I go back to eating “normally”? Should I find a way  in the middle? Lots of thinking went into this, but in the end my gut made the decision.

Gut decision number one: it hurt.

My stomach hurt. Literally. All night and all of the next morning, there was rumbling and churning and a bunch of noise going on in the middle of my torso. It was insane; I haven’t heard anything like it before or since. I mean, wow.

Gut decision number two: it’s not worth the stress.

I’ll be honest and say that when it comes to certain foods, especially “sweet crap”, I feel like an alcoholic or drug addict. It is very hard for me to control my consumption of sweets when I do not restrict myself and the thought of not having any rules in place like I did for a year was a gigantic source of anxiety for the few days I took to make a final decision. I felt tense and nervous and it was on my mind a lot, which is how I imagine a sober person feels if somehow they are confronted with their vice and no controls to help them out. Not that I ran out to get cookies and ice cream and dig in like a nutcase, but I did get to a point where I dreamed I had had some of the chocolate in my kitchen (that I buy for visitors, like the Ferrero Rochers) and I woke up stressed and more tired than the previous evening. I don’t need that in my life. When I baked the 106 mini muffins I took to the office for my birthday, I ate the last spoonful of melted chocolate that I had used to decorate them. In and of itself, that’s not a bad thing. The bad thing is that I didn’t actually want to eat it. I just did it anyway. It made me feel bad about myself, angry, and guilty. And I don’t need that in my life either. The moment I decided to go back to zero, I felt a weight lift off my shoulders. I felt safe and relieved. That might sound crazy to some, but others will understand. Either way, honestly, I don’t care. It works for me and that’s what’s important.

What does zero with an asterisk mean, you ask?
Oh, you didn’t actually ask?
I’ll tell you anyway.

Zero* means that I am continuing the way I described in the post about not having sugar. There are two *exceptions: new things and special things.

New things means I make something I have never made before and need to see if the taste is right. Before, I happened to have company while baking and didn’t have to taste the thing myself. If I’m on my own when I bake, I will taste what I’m making if I’m not sure the flavor and/or texture are right. This does not mean actually eating it, but it means tasting a fingertip or knife point and not wiping my tongue on a kitchen towel and rinsing my mouth. Yes, I have done that. Get over it.

Special things means one or two of my grandpa’s Vanillekipferl while they’re fresh. It means one of my goddaughter’s first ever Christmas cookies she made with her grandma. It means one select praline candy in a famous chocolate shop in Luxembourg city. It means a small piece of a new thing I make that might be something I enjoy or a small piece of a thing I’ve made before that I know I enjoy. Like day and night brownies, for example. I only make them every few years, because they’re quite intense (in flavor and calories!), but I made them for birthday-coffee-and-cake with my family and had a little bit (off the knife when I cut them and an actual piece at work on Monday, probably around 3 tbsps in total).

Those are my asterisk. 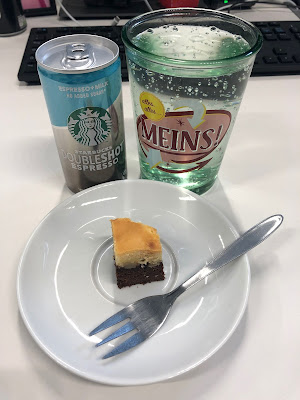 I like this. It seems restrictive, but it’s actually freeing.

You know what, I do care if you get it or not.
I actually hope you don’t.
It’s no fun.

But it’s all good now.