This is not isaontheway writing, nor even Isabella.

the Furious Flame of the Deserts,
the Fiery Fiend from the city of Thraa.

Let me tell you a bit about myself.

I am Xanaaq, but my friends call me Xana. The “x” in my name sounds like “shh” – like the sound of grains of sand being blown over sharp rocks by the desert wind. I do not hear that name often, as my friends are few and my foes are many. They have names for me, too. Raiva, they call me in hushed voices when somebody mentions firestorms. That is but one name of many. It might be interesting to you that my name has a meaning in some of your world’s languages – and it is the same meaning for each of them. Xanaaq means fury in Somali and Raiva means fury in Portuguese. In my world, my name is a warning to those who would dare to try and oppress me or mine and a signal of hope to those who live at the receiving end of this oppression.

My story is long and complicated, but I shall try to give you a shortened version.
Just so you may know who you are dealing with; who Xanaaq is.

I am from the Land of Mnar. My family is part of the Tulipalo Tribe, similar to your world’s Touareq. We are a nomadic tribe, long ago exiled from Thraa because of mistakes made by our ancestors. This is a story for another time. We roam the blue and green sands of the Bnazic Desert during one half of the year and the Poisoned Desert during the other. Our culture and identity are rooted deeply in Fire Magic, which allows us to make use of and interact with the flora and fauna of the desert lands, growing crops of magical plants and communicating with the animals that dwell in the hot sand.

Being from the desert, I do not get hot or cold easily. I have heard of this thing called “sweat”, but I do not understand what it is. I have also heard of something called “being shitfaced”, but I do not understand that either. I know that when I drink Aguardiente, it quenches my thirst. And when others drink it, they become exceptionally talkative very quickly. Then they figuratively drop into stupor and confusion, sometimes paranoia, before they literally drop to the floor. It is a very useful thing, having this advantage over others. Especially when they do not know who I am and where I’m from and they believe they can do this thing called “drinking me under the table”, which never works. I can use my Magic to heat things, melt things, burn things to the ground. Among many other practical applications. We are taught the ways of Fire Magic almost from the time we are born, to make sure that as we grow older and stronger in our powers, we can survive in any surroundings and under any circumstances.

As a young girl, I was captured by Ilthmarians close to the border between the Poisoned Desert and Eagle Plain. Along with a sister of mine and two other girls from our tribe I was taken first to Ilthmar and then to Lankhmar. On a ship. I hate ships. I hate ships, because they travel on water and I hate water. It is the worst. I don’t drink it, I don’t touch it and I especially refuse to float around on it in a feeble wooden construct that might shatter and break at any moment, spilling every soul on it into the dark, wet, disgusting depth. Anyway, Lankhmar is where I spent the last ten years of my life, living in a boarding house on the Eastern end of the Plaza of Dark Delights, built snug against the walls of the Shrine of the Black Virgin. I do not wish to speak of the time I had to endure the hardships not only of a pleasure slave, but also of a young person separated from her people and unable to live a life other than what she was born for. For a nomad, living in a small house at the edge of a small plaza within the thick walls of a city, Gods, it is the worst. For a child of freedom, to be sold and bought and borrowed and lent, it is an indescribable terror. The only thing that allowed me to go on was the white-hot flame of the desire for vengeance burning deep inside me. It kept me fighting and honing my Arcane Magic skills in the few stolen private moments I had over the years, until I was powerful enough to escape and begin my quest for justice for myself and all others like me. Being powerful from my childhood on, you might think that I could have escaped captivity a lot sooner than I actually did. And you'd be right. But what you have to remember is that I wasn't the only one trapped in that dreadful place under those dreadful conditions and forced to perform the most dreadful of duties... Leaving so much as a day earlier than when I did would have meant escaping on my own and all the others bearing the consequences, which no doubt would have been horrifying. My only choice was to stay for as long as necessary to build up my power and hone my skills until such a time as I would be able to take all of my fellow prisoners with me. I couldn't have left them behind, so I grit my teeth and counted the minutes until I was able to orchestrate an escape for all of us and use my powers to ensure their continued freedom.

My life ended the day of my capture and began again the day of my escape.
Now, I am stronger than I ever was before and my powers still grow every day.

Communicating with your world has been a challenge both for myself and for Isabella, but we have figured out a way: dice.

In your world, there is something called RPG – role playing games. Isabella has recently discovered those for herself and become quite into the idea of pen and paper tabletop role playing games. Luckily, she has friends who play and are willing to have her over to play with them. Playdates like this haven’t been part of her life since kindergarten, or maybe primary school at the latest, but she insists it makes her cool, not silly-looking. What a nerd, right?

Anyway, her playing an old-school Savage Worlds campaign with the aforementioned friends is how we met. And dice is how we can communicate across the dimensional planes. I’m here in Lankhmar, Nehwon. She’s there in Vienna, Austria. It’s weird, but it works.

She’s really nice, too, and even got a special set of dice just so I would be more comfortable!
Actually, she got four sets of dice – for the four stages of fire: 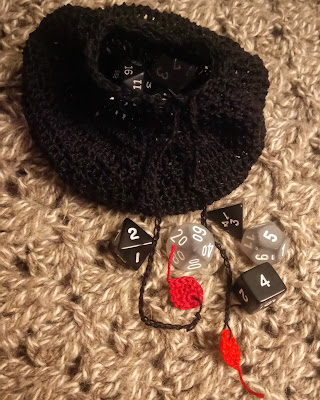 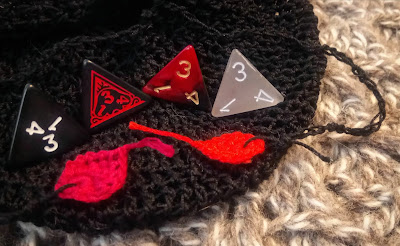 I mean, again, what a nerd!

But it makes for some fun afternoons when we chat across the dimensions and our paths intertwine and I think we’re becoming quite a team as well:

PS: she made that dice pouch herself, it’s crochet with little crochet flames at the ends of the ribbon – how cool is that?! 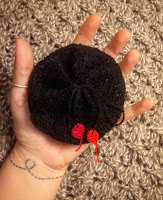 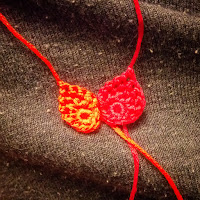 PPS: You’re absolutely right, it’s not cool at all. Just… what a nerd…

Posted by isaontheway at 8:48 AM