Not years of life, no. Countries traveled.

And I mean it quite literally, too. I am currently sitting in seat 5A on a flixbus that's taking me to Luxembourg. I won't be when I post this, but I am as I write.

Luxemburg will be my number 50.

I was nervous about this one for a while, because it's a big number so it should be a special country. But what makes a country that kind of special? How do you choose? And who am I to judge? It took months of pondering...

So, in the end I made a super spontaneous decision. And it was a very "me" decision. My friend Avidesh went on a trip and, as one does, regularly posted photos to Facebook. He posted something from an excursion to Luxembourg and it looked pretty, so I said "that's pretty" and booked myself a bus ticket and a hotel room in Luxembourg for the end of the year. One, two, done. Then I saw the photo was from a town in Belgium.

However. However! I'm going anyway and I like the idea. As for the pretty place, it's only about an hour and a half from where I'll be, so I'm thinking about going there for a day. 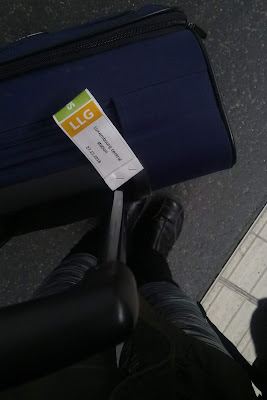 Plus, I get to see my friend Nai again after over 10 years (I think) of not seeing each other in person. Living in The Hague, he'll be close enough to swing by, and because he's cool like that and has time, he's actually doing it. I can not wait.

I'm watching myself get more neurotic and less flexible by the day and while I do try to combat that development, I'm fighting too many battles on too many fronts at the same time to make effective headway anywhere. At least, that's how it feels a lot of the time. It's not nearly as bad as it sounds and, objectively, I'm doing really well. Like, reeeally well. But I'm not yet in a place where I can feel that. Getting there, though, I'm sure.

So, being scared of everything made choosing a new place to put myself in for a few days daunting, to say the least. The snap decision made it easier and I'm very grateful for my inability to properly read and understand Facebook photo captions.

And why the hell by bus?!
Curiosity, mostly.

I keep seeing these green and orange buses everywhere and wanted to know what the service is like. The reason I chose a 17h trip for my taste test is another instance of the good old oops-I-didn't-consider-that-until-after-the-fact.

Could I have immediately cancelled my reservation and gotten a flight instead? Yep. But I decided to stick with it for two reasons. One is that I wanted to challenge myself. This is harder, less comfortable, and takes more patience and endurance. I do this a lot, make things unnecessarily hard on myself. I want to see if I can do it. Don't ask me why, please. The other is that I used to travel by bus a lot when I was still that different person that got lost along the way somewhere. The free and simple one. I explored so much of South America by bus and not the luxurious kind. Oh the stories I could tell... but it's not like I have a travel blog or something. I've been on a bus for more than 17 hours more than once. But I was in my early twenties then. I'm in my early thirties now. I want to see the difference, how old this really is.

Here I am, then. By the left window on the top level of a green and orange bus, barely three hours into the trip. 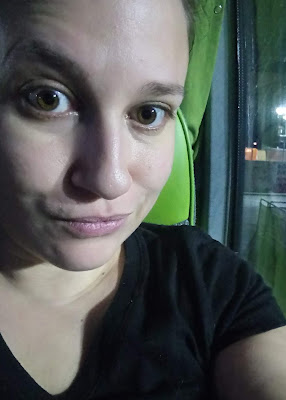 Me being incredibly aware of what I've gotten myself into.

I shall keep checking in.

First stop (not counting the gas station a few hours ago): Munich. 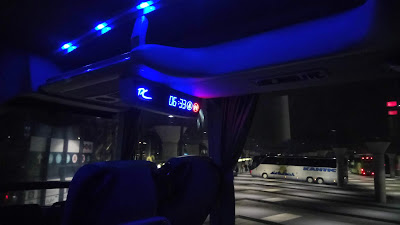 A lot of people have gotten off the bus here and the guy sitting next to me has taken the chance to get a row to himself from here on. Obviously, I also have a row to myself now.

I have already decided that, if I do this again, I'm springing the extra Euros to get the seat in the front row or by the stairs. Much more legroom there. I have not yet decided if I'm ever doing this again.

I'm seriously tired by now - maybe the girl that can't sleep without a pill shouldn't travel in a bus full of strangers across Germany overnight. But it's too late now for anything to be done about that. That's fine, though, I'll figure it out.

I miss my kittie a lot, but it's good for him to have a break from his silly old human every once and again.

Off I go to stretch my legs a bit around this Munich parking lot close by the bus terminal, because we are taking a break now.

Let's see how this continues.

My non-seat-reserving neighbour had returned, because somebody else got on the bus and he was in their seats. My fifteen minutes of comfort are thus over.

Note to self: find out how much more it would cost to reserve two seats and avoid row-mates altogether.

We're past the halfway mark!

The driver just took the wrong exit on a roundabout and then went on to reverse this double-decker bus back into the actually que busy roundabout in order to get onto the autobahn heading to Stuttgart. I feel safe..? 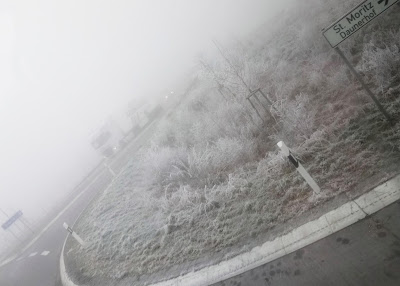 Also went on the adventure of using the on-board restroom and was very positively surprised. It was not at all disgusting. Contrary to the two teenagers currently sitting behind me, who have neither manners nor any filter (the boy actually seems like a nice kid, but the girl is just gross) - but I think they're about to get off the bus and then the only annoying thing left will be that one cell phone that rings every little while and wakes everyone but the owner.

By now, the sun intense enough that there's no frost and ice left on any plants except for the grass next to the road. It was pretty; I'm curious to see if there'll be any in the mornings in Luxembourg.

I just had what I will call lunch, because it's noonish. Plain bread, because I wanted to make sure I'd bring quiet and non-smelly food. I'm spending a lot of time with a lot of people, after all. Nobody else has loud or smelly food, either, so far - but that's not stopping the smells... If I didn't check the time, my nose would be able to tell me that I've been this (mostly) enclosed space with a bunch of other primates for twelve and a half hours.

It was all easier during the night, because people don't usually eat and drink while they're asleep. But now, especially at stops, odors are happening. And there's more talking now, too, especially on phones. I'm not complaining, just observing. This is normal.

It's not how I remember it, though. Traveling by bus in Latin America there was always a movie being shown, so there was less taking. And not everyone had a cell phone and was constantly yapping away on it. And the smells were taken care of by the crazy high air conditioning. The recycled, freezing air didn't stink like this, not once. Instead, you were packed into all the overclothes you had or had to buy a blanket at a treat stop. Here, because it's winter, the heating is, which like your average household microwave, intensifies the attacks on your nose. There, then, the season and climate didn't matter: you were traveling a fridge set on high and there was nothing to smell. And even if there was, you wouldn't, because your nose was frozen solid. Yes, I exaggerate, but they're find memories.

Now, I'll see if Misters Solo and Calrissian can distract me from my neighbour's violent snoring. 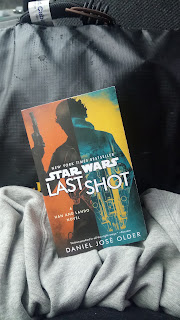 Pretending I'm on the Falcon, not a stuffy bus.

Oh, also, I think we went past a nuclear plant a while ago and right now we're approaching Heidelberg.

OH MY GOD I FOUND THE POWER OUTLET!!! 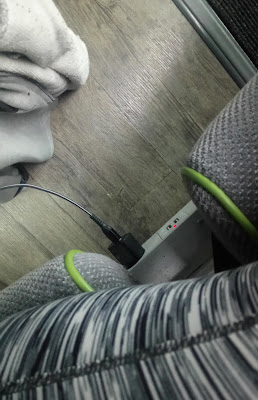 I got the power!

The way back is going to be so much better...

This is the first time I really have both the window and the aisle seat to myself, so not only am I much, much more comfortable now, I was also able to bend down and look for the outlet under my seat. I couldn't see it before, because I wasn't able to look there.

And because I don't have to conserve battery power anymore, I was also able to connect to flixbus' WiFi and am online now. Back in the connected world and without having to worry about my phone running out of juice. Podcasts, here I come.

Here we are, in the last hour, on the home stretch. Away stretch? One more stop coming up in Germany, then it's my turn to leave the bus. 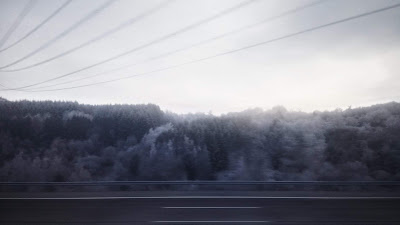 With sunset lighting for special effects.

There are white trees and bushes to the left and right of the road again; it's so pretty. I wonder if I'll get a close-up of that makeup of nature while I'm in Luxembourg; back home it's too warm at the moment for that kind of frost to form.

I'm in my hotel room now, ready to end the day. I have a lot of catching up to do regarding sleep, so I'm not heading out tonight. The rest of the ride went smoothly, although we did arrive with a slight delay. 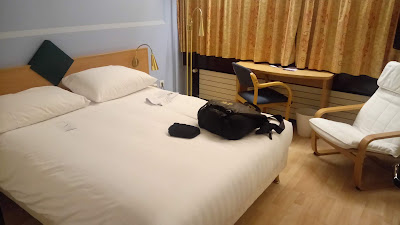 I already dropped onto this bed and will not get back up until morning.

Let's see if Luxembourg can handle the pressure of being

Posted by isaontheway at 1:37 PM