You put what where?!

The conversation went the same way it always does:

Somebody: Do you like cilantro?
Me: Ugh, no. But I learned to tolerate it in Colombia, because they put cilantro in everything. It's like, you eat cilantro or you don't eat. About the only thing that's missing is cilantro ice cream or something.

On Tuesday, I went to get coffee with my mom. I remember all of that. After, she wanted to get poppy seed ice cream (really good, by the way) from Eissalon am Schwedenplatz (a very good ice cream shop). I didn't want to get ice cream because I'm trying to get rid of (obvious) sugar in my diet. However, I looked at the list of flavours and my jaw dropped instantly. 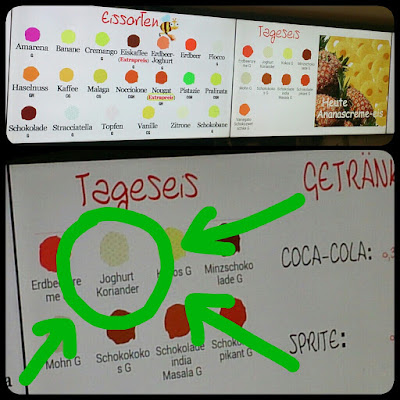 Of course, I immediately discarded the idea of another star sticker in my calendar (I get one of those for every successful sugar-free day) and got myself one scoop of yoghurt cilantro. Yoghurt. Cilantro! ICE CREAM!!! 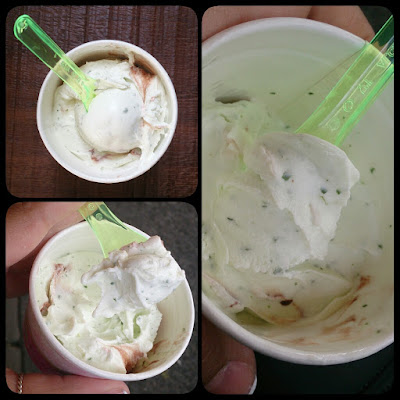 The brown stuff is chocolate ice cream
left on the spoon from the previous serving.
Nothing rotten here.

You might think that there's not an awful lot of cilantro in there, but if you know cilantro, you'll know this is more than enough. If I had to describe the taste sensation of that flavour combo in one word, it would have to be confusing.

It immediately reminded me of chow, where the flavours of sweet and spicy are combined and then mixed with a cilantro overdose to provide a marinade-bath for fruit. This ice cream just lacked the spiciness of salt, pepper, and chili peppers - which I'm very grateful for! The sweetness-but-also-a-bit-sourness of the yoghurt is the main taste bud tickler; the cilantro comes in after and provides the final touch. That's where the giggling starts.

I was definitely surprised by that scoop of ice cream. My second reaction (right after "hey you read my thoughts and stole my sarcastic idea") was one of incredulity: "You put what where?! Cilantro in ice cream? Are you completely nuts? Or Colombian?"

The fourth reaction, though, after the giggles and whats, was absolutely positive. It was 100% worth giving up a star. If you're in the area, make sure to try that weird flavour if it's available again, you'll be surprised too.

In the meantime, keep using your cilantro for guacamole, soup, and salad. Let's leave the experiments to the pros.