Instagram just updated their logo and the in-app design, taking a step towards the future. I, however, am about to reveal instagram's distant past!

Today, I went to the Museum of Art History (KHM) with my mom. There was a special event for the museum's 125th "birthday" involving free admission when presenting your public transport annual pass and a free guided tour through the current special exhibit: Feste Feiern - Celebration. I'm translating this as I write, meaning you'll have to check the museum's website to see what the official English name is. Yes, very lazy, I know.

I love our many great museums and actually am a proud owner of a KHM annual pass, but I don't usually do any guided tours, instead just walking around on my own and reading all the placards and wall decal explanations. Thanks to our young art-history-student-and-museum-guide-on-the-side, I learned something new today. 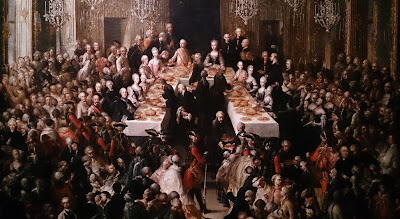 Above is a part of Johann Carl Auerbach's 1773 piece "Court Banquet Celebrating the Engagement of Archduchess Marie Christine and Prince Albert of Saxony on April 2nd, 1766 at Hofburg Palace" (tl;dr rich people eating).

Now, there's nothing much new right there, a bunch of royals eating off golden plates at the table in the centre, a bunch of lesser royals and nobles sitting or standing around them watching them eat, plenty of servants and guards everywhere. What was new to me was that in order for the audience to know when the big fish in the middle were receiving their next dish, fanfares announced every new course to the spectators.

That's kind of like sitting in a sports arena or stadium and relying on the announcer to give you the information you can't get from just watching, because you're way back and up, in the cheapest of seats. That's pretty wacky, but not too crazy.

What is seriously nuts is the fact that outside the castle or palace cannons were fired so as to allow the townspeople and the nearby peasants to also follow the royal banquet plate by plate. Cannons! So the peasantry would know when the fancypants received another plate- or bowlful of food most likely prepared, at least in part, from the tenth of the crop they had to hand over with every harvest.

So I'm in the museum, looking at the picture and listening to the guide and I'm like, "Dude! It's instagram!"

And I mean it!
Think about it!

Transport that setting into our times and what you get is a bunch of rich people (not to point fingers but... probably the Kardashians) blasting out picture after picture of #foodporn and #dinnerselfie and #blessed to their hundreds of thousands of followers who sit around, phone in hand, waiting to see more. On one side, the followers will react with #goals and whatnot and, on the other, tweet about how those rich b******s are really just annoying wannabes with too much undeserved money.

I'd like to believe that, back then, the scenario would have been similar, if offline. Two peasant teenagers going on and on about how Lady X totally needs to stop stuffing her face, because last time she rode by their fields they saw that she was getting, like, really fat. And how Prince Y is, like, so cute, but he's also, like, a bad boy, because he definitely cheated on Baroness Z. And, really, they should all just, like, #checkyourprivilege or #gtfo.

You may or may not be able to tell that I had a lot of fun (in my head) at the museum today.

All I can say is go and see it all for yourself. The museum is open year round and even if admission fees are a little steep, it's worth it. Especially if you reserve at least five hours for the visit: that should give you enough time to at least browse through everything.

The special anniversary exhibition opened on March 16th of this year and will be open in this shape and form until September 11th. After that, only the pieces that reside at this location anyway will remain, while items on loan will be returned to their regular homes (which include museums like the Prado in Madrid - how cool is that!).

You'll think of me when you see the painting and hear or read about the 18th century's weird customs. And you'll enjoy the art, even if you don't go spinning tales in your mind like I did.

And now we know: #foodie et al are absolutely not an invention of our time. It's been happening for hundreds of years and we're definitely not the first ridiculously self-involved generation out there. (Phew!)

Posted by isaontheway at 4:54 PM