...or some other silly pun about jewelry and eggs that you won't really get until you're done reading this post... But then, I swear, you'll laugh. Or giggle. Or maybe smirk..? But there will be some sort of a reaction. And it'll definitely be positive. I swear! At least you'll know what this is all about.

Today was, or still is, really, a sad day for this nation. My nation. Austria.
[Scroll to the second picture to skip the political banter.]

Why? We had our presidential elections today. That's not a bad thing in and of itself; democracy is a great thing, I do believe in it still, and exercising our right to do our civic duty is, even though that just complicates this mess of a sentence even more, a huge privilege. 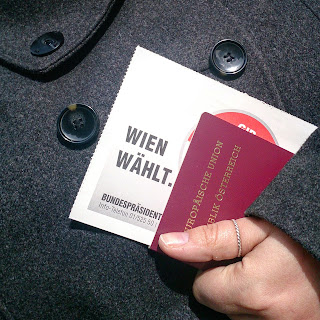 However, today, it made many of us feel pretty blue. See what I did there?

According to Österreichwahl.at, as of right now, the majority of people seem to have voted for Mr Norbert Hofer. Of the FPÖ. The blue party. The far right. This is the first time since the Second World War that the majority of votes has not gone towards either the christian democratic Austrian People's Party (ÖVP, black) or the socialist Social Democratic Party (SPÖ, red). This is also the first time since World War II that we've fallen this far to the right on the political spectrum. As the often misquoted Austrian writer and journalist Karl Kraus didn't really say, "Austria is the only country to become dumber with experience."

Either way, with or without witty quotes, there is very probably going to be a second round on May 22nd. What we have to do now is hope for a different result that puts another candidate (literally, any other candidate) in an absolute majority position, so we can - way too narrowly - escape the fate of having a far right president. Even better than just hoping for change, we can try to effect it by speaking our minds and trying to show those blue voters why any other colour is better for us.

It's true, the position of president is a mostly ceremonial one, but the person does represent our country and all of us to the rest of the world. Aside from that, the current situation all over Europe is messed up enough as it is: we don't need to kick ourselves 71 years into the past right now... May Space Cat save us all.

Now, on to more positive things and the actual topic I want to talk about today. 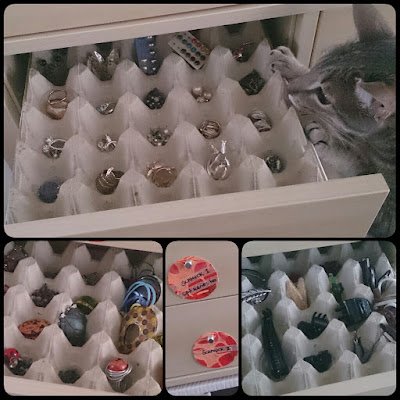 I love earrings.
And I like rings.
Naturally, I have a lot of both.

Add to that about eighty-seven little hair-related items.

I used to have more than just a lot, more like a whole lot. All of it was kept on hanging shelf-/rack-like things I either found and repurposed or made myself for that specific use. Then, traveling all the time and moving around, criss-crossing the planet over the last few years, I had to sort through everything and could only hang on to the most special and most often used pieces of jewelry (and hair care). The excess went to friends and family the last time I left Austria, so I didn't have to throw anything away but instead was able to find all of the earrings and rings and even bracelets wonderful new homes.

All I had left fit neatly into a little crafts/tool organising box, so I didn't have to worry about keeping an order - the order kept itself. Now, though, I'm settling down again. That means that I can extend my collection again and also give my jewelry a permanent spot in my apartment.

This is where the egg cartons come in.

Inspired by The Oblique Imperative's jewelry sales displays at craft fairs and markets in Trinidad, I asked around various local supermarkets in my new neighbourhood to see if I could get some of the big, tray-like egg cartons. Unfortunately, while they do have them, they also usually have to keep them and return all of them to the egg delivery company or they get in trouble by the next time they need a shipment of eggs. Luckily, my mom was able to get me three cartons at the farmer's market, where the rules are not as strict.

The reason I wanted egg cartons and discontinue the use of the organising box is twofold: first and foremost, I didn't want to always have to open and close the box's lid all the time, because they do break off so easily and it's extra tedious when it's stored in a drawer: open drawer all the way, pull forward organiser box (which had always slid to the back...), open organiser and take out thing and close organiser box again, shut drawer (and listen to the box slide back again). It doesn't sound like much, but it was very annoying. Also, after extending my "collection" to feature a bunch of new, officey nice things, I needed a bit more space. I could still make the box work, but that meant items sharing compartments and things getting tangled or forgotten. Can't have either of that.

Now, my bling and my swag are sorted by occasion-appropriateness and together-wearability. Every piece/pair has its own compartment and they only have to share when they actually go together (like my fake-pearl ring and the fake-pearl earrings) or are just completely interchangeable (like all my top-of-finger rings). It looks much more organised and neat than I actually am in my private life. And it will definitely keep looking that messless, because I'd have to put in a real effort to make that new system look disordered.

Originally, I was going to paint my cartons white or another light and neutral colour, but seeing them in the drawers as they were when I checked their size and fit, I decided I liked the way they looked and to leave them untreated. The cartons fit into my (IKEA Kallax shelf inlet) drawers in a way that their sides rest on the sides of the drawer itself, which are not as high as the front of the drawer. That means that there is space left underneath the cartons to hold other, less frequently used things. HighFive for effective use of space 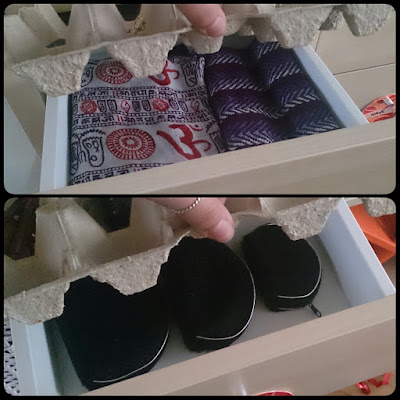 If your drawers are larger or smaller, you have a bunch of options. If they're smaller (more narrow, shallow or short), you can cut off the edges of the former centimetre by centimetre or millimetre by millimetre until the trays fit onto the bottom or onto the sides of the drawer. If they're bigger (more wide, long or deep), you can set the trays on the bottom and put other things next to or behind them. Lastly, if they fit the trays perfectly, but only when they're on the bottom and not the sides, you can fix up some contraption using straws, or maybe chopsticks, to hold the cartons at side-wall level and open up that space below for who knows what.

Again, this wasn't my own idea, but my buddy Rohan's.
I just wanted to share a little DIY/lifehack goodness after all this time.

Again, my country did a bad, bad thing today and I hope it doesn't stay this way.

Again, this blog is definitely back.

Posted by isaontheway at 4:17 PM