She wants the DD!


I heard a piece of relatively random and certainly unimportant (in the big picture of life, that is) news a little while ago and forgot about it again until just before I started getting ready for my trip to Austria. That's because the news had to do with Vienna; being that that's the city where DunkinDonuts, (not) everybody's favourite olde donut shoppe, opened two brand new locations. One is on the recently redesigned Mariahilfer Straße and the other - lucky me - is all of ten minutes from my mom's apartment, right here in Favoriten, just below Reumannplatz.

For obvious reasons, I had to go as soon as I had the opportunity.

In case it's not obvious to you, quick explanation: it's not that I'm some huge fan of donuts. Not at all, actually. I just used to get DD coffee whenever I flew out of FLL Hollywood Int'l Airport, because there was a little outlet in the terminal that served Caribbean and South American airlines, as well as Spirit. And the second reason is that there also used to be DunkinDonuts in Bogotá and I'd get coffee there from time to time. That was before Juan Valdez had WiFi. Which brings me to reason number three: DD has WiFi and my mom doesn't. 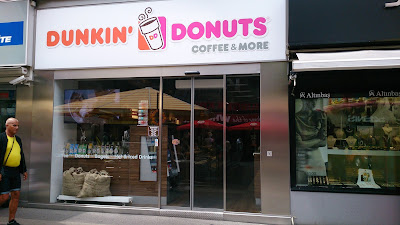 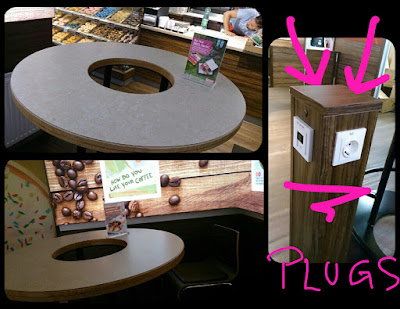 So now I sit here once a week to enjoy a gigantic iced latte (non-fat decaf double shot soy vanilla... not) and bum around online and update my Kindle and download some podcast episodes. In fact, that's what I'm doing right now (Can't wait to listen to Paul Rudd on Nerdist tonight!).

Last time, the first time, I was here I enjoyed a Cookie Monster donut and a giant (read: large) iced latte. Because even though I'm not big into donuts, it's still fun to try their pretty and creative little concoctions. 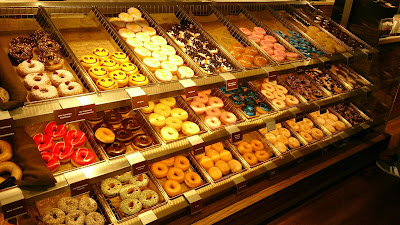 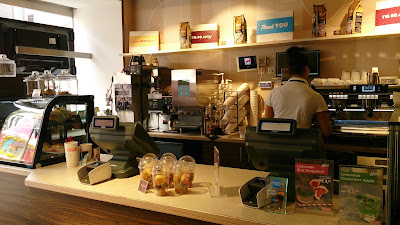 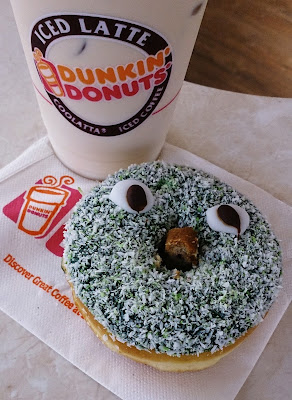 Today I went for the same large iced latte, because I like simple; simple is nice. But I opted for trying a different donut, the one with the heartbeat. Drawn-on, not a real one. That'd be weird. 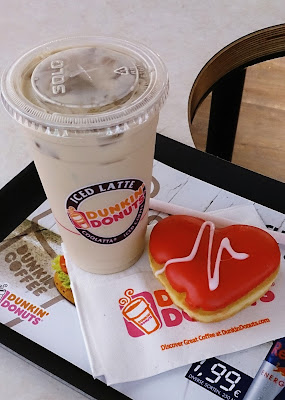 Fun fact: heartbreak is no longer to be feared!

If somebody breaks your heart - or eats half of it - then don't worry, there's a bright side. A bright red side. Jelly! 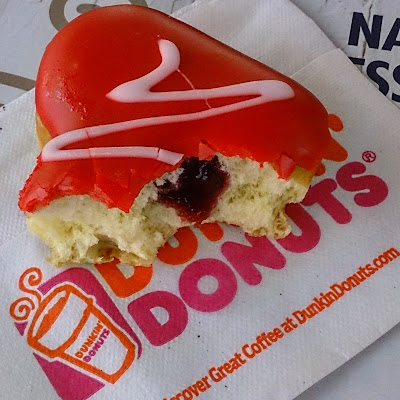 So that's why she wants it, the DD. Because donuts, coffee, reminiscence, and WiFi.

All of which I'm done with now, so this is buh-bye for today.

Posted by isaontheway at 9:06 AM