I'm in Austria, which means I'm away from my desk and my laptop and my printed little library and the actual library on campus and my office and my colleagues and my supervisor. What it doesn't mean is that I'm on vacation.

I have some articles with me that I have to read and I'm replying to emails where I can (though it's proving itself a challenge with only my phone and my mom's computer at hand), I have my thesis notebook so I can keep working on the questionnaire and the interview structure and the outline of the timeframe I'm continually setting and resetting. And I have a Sith-load of appointments. Only about a third of which are related to seeing friends and family, who I'm not actually getting to see enough of. No, I'm seeing all kinds of doctors (nothing's wrong, just annual checkups), I'm seeing my bank person (nothing wrong, an ATM just ate my card on day one of my stay here), I'm seeing my bank person again (because we're having a secret affair... not. I just love visiting the bank so much... not. Because living abroad means there's crazy much to take care of whenever you're in the country... this one's the truth.), I'm seeing my dentist (because "people who are really good with brushing their teeth tend to get kicked in the butt with flossing-related issues" - his words, paraphrased), and then there are an estimated sixteen million shopping errands, because of what I have to do here and what I can't get there.

I'm having a good time, don't get me wrong. I enjoy all of that because it's so easy to get it all done here. I already said this in the food post, but there's really nothing like walking all over town and taking trams and buses and metros. I'm being serious. And I also love the feeling I get when, at the end of the day, I look at my crammed calendar and get to tick off every single item. Accomplishment feels awesome! And that's also something I miss when I'm at school, not because I don't do anything, eh, but because the process is slower.

Sounds like a lot, though. Fun or no fun.

And that's why I took a day off.

For a while before heading over here I'd had the idea that I wanted to go somewhere for a day where I hadn't been before. I used to travel a lot, as you know, just look at the other posts on this blog, and since I started with my new university programme I've been stuck on Trinidad and it. is. killing. me.

Not having more time to go places means I have to take advantage of being here in Europe. Last year, I went to Rome for a week. This year, I don't have enough time for something like that. So the idea was to go somewhere new inside Austria. We might be a small country but there's tons to discover so don't think there's no surprises left just because I'm from here and grew up here.

A place I've wanted to visit ever since I first heard of it is the Green Lake in Styria, but for a series of reasons that ended up not being possible. My next idea, after about seven minutes of research, was to go to to Attersee. There's a bunch of Strandbäder (basically beaches) and one of them has a kayak rental and on top of that there's the option of doing a Klimt walk. The painter used to work there and you can explore the landscape that specifically inspired his paintings. Buuut I slept terribly the night before and it would have been irresponsible to drive that far so we ended up going somewhere else. (Don't worry, Attersee, I'll come by another year.)

My mom decided that she also needed a day off and to spend more one on one quality time with me, so she took the day off work and accompanied me.

This is where we went:
Neufelder See. 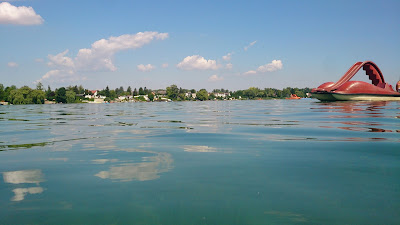 On the border of Lower Austria, just inside Burgenland, only about half an hour from Vienna. The water has A+ quality, it wasn't going to be too full as it was Tuesday, perfect. 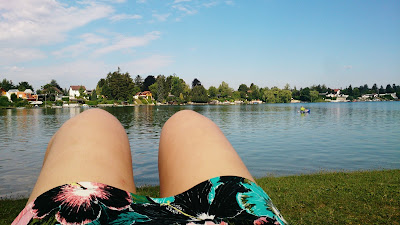 We settled down on rented beach beds and just relaxed for a bit, when suddenly I heard quacking. That's because we were in for a super cool surprise: ducks!

The website hadn't mentioned these so I was very surprised when they suddenly waddled up right next to me and didn't give a single quack about us humans. They weren't scared or anything, badass little duckers. 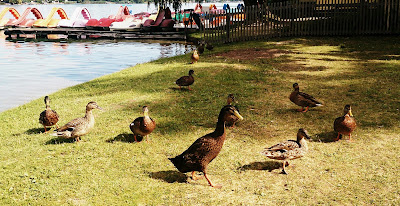 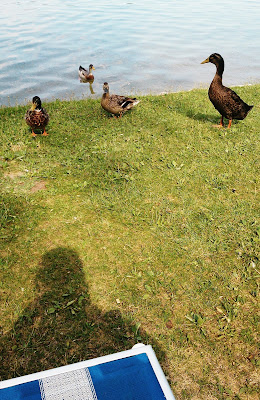 They proceeded to show off by going in the water. At that time it wasn't show-off-y, but I realized that it had been when I tried to get into the water myself. It was freaking freezing!

The internet hadn't mentioned that either... And there was a display showing the outside and there water temperatures - as 32 and 25 degrees Celsius - but it was obviously broken. No way was it that hot out and warm in. Later, that even rose to 36 and 26 degrees, but I swear on my crocheted bikini top that that was still incorrect.

I did make it into the water, but it took me so long that I refuse to disclaim how long exactly. Hey, what matters is that I made it! 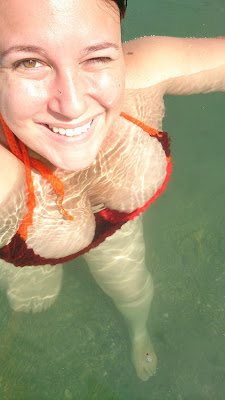 After that came coffee, more toe-dipping - I mean, swimming... more swimming! - some reading and about half an hour of sleeping in the sun - all in all very good, exactly what a day off is supposed to be about.

We didn't stay too long, though, because while the typical Austrian Strandbad food is delicious (Langos, fries, sausages, etc), we had seen one of our four Oldtimer Raststation restaurants on the way to the lake - basically a fancy truckstop for vacationers, well, and trucks. And they always have salad bars. Mmm salad!! 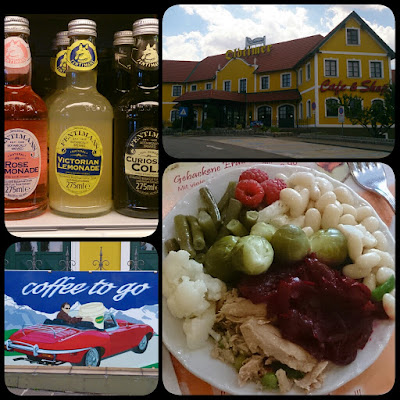 After that, it was only about ten or fifteen minutes to reach back into the city and the rest of the afternoon was spent doing nothing.

Because relaxing is exhausting!

I'm already back to running around Vienna like a beheaded chicken, getting this and taking care of that, all the while enjoying the fact that I can, as I've explained, exhaustively. However, no matter how much I enjoy the things I'm doing, that break was awesome.