It's been a long year so far. A ton of stuff has happened. Good, not so good, and wonderful.

I am no longer alone, because on January 1st a little kitten adopted me. He, Macaquinho, is absolutely adorable, playful, and fun. And he's long, very slender and long. You should see that Guy stretch! My human family also grew when my dear Iris and Wolfgang brought the lovely Hannah into this world. Hannah is even about to officially become family, by becoming my goddaughter. It's a long-distance-relationship, family edition.

My research is progressing - more slowly than I'd like, but we're getting somewhere. I'm currently in the process of getting all the approvals I need to send my survey questionnaire, which I'm piloting right now, out into the world. It's super long, that questionnaire, with a total of 67 questions. Those questions are interesting, though, they make you think. And they're mostly closed-ended - multiple choice & Co - so it's not terrible.

What else is there? New laptop, broken laptop, more broken laptop, no laptop, repaired laptop. And I got Netflix. Long hours spent listening to really cool movies and TV shows. Listening, mainly, because I just can't sit still long enough to fully concentrate on watching something without doing anything else at the same time. All those ailments I've been complaining about healed (no worries, I replaced them with some minor new ones, of course) and I'm almost completely intact right now. Let's hope this wasn't a jinx! I've been crocheting like a madwoman and I even baked a bit since my oven was fixed for real. I don't know how to build the "long" theme into those last ones, you'll forgive me.

But yes, it's definitely been a long year.

And this week, Monday and yesterday, almost punctually at the halfway mark, I went through another long thing. The way to Austria. (Cos, like, that's where I am right now.)

Somehow, I managed to book the weirdest connections and now I'm going to tell you about them.

First, naturally, I flew from Trinidad to Tobago. Naturally, because Condor flies into ANR Robinson Int'l on Tobago and not Piarco Int'l on Trinidad. In Tobago I did something I'd been looking forward to for almost a year, since the last time I made that connection on my way to Europe: I had fried chicken.

But isa, you live surrounded by KFCs and other fried chicken chains! Why did you have to go all the way to Tobago to eat some? Well, my dear, that's simple. I hate KFC in Trinidad (the few times I ate there I got sick because the food is ridiculously greasy) and I don't like any of the other chains for the same reason.

However, there's this little place right in the airport over in Tobago and, oh goorsh, it's great. The chicken smells, feels, and tastes like real and fresh chicken, not like it was processed in five different big machines and then fried and then keeper warm somewhere until sold. The outside is crispy and crunchy and almost dry, not soggy, limp, and stale. And the service. The service! The outsole who work in there are so friendly and sweet, I can't even think of an appropriate comparison. 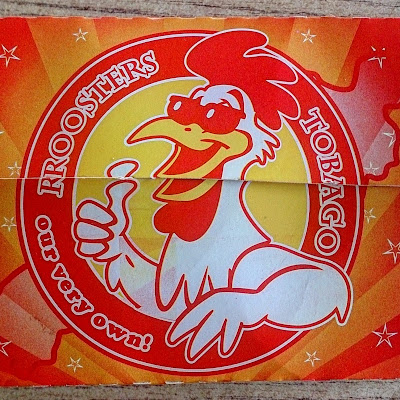 After I was done enjoying my meal, I sat and crocheted until it was time to head to the gate. The flight was delayed by an hour because the plane came in late, but when your belt is full and you have your latest crochet project and you're fully charged kindle, you don't even notice the wait. 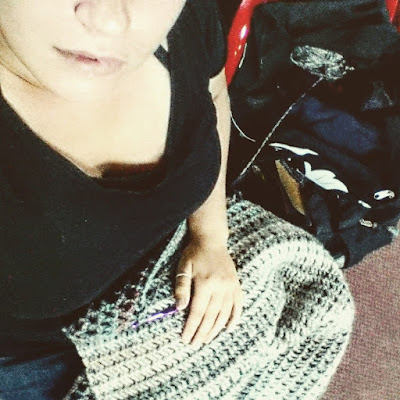 That flight was funny, because of Condor's organisation. It was officially counted as part one of the flight to Frankfurt, so the flight number was the same on both flights. The passengers, however, wouldn't be, as some left and others joined while the plane was cleaned and re-stocked and -fueled in Barbados. So upon boarding, the stewardess at the door told everyone that it was free choice of seats until Barbados. Of course, that meant that everybody was confused - I rarely hear that much giggling and laughter between strangers on a plane.

The wait in Barbados was uneventful, but I did take advantage of the time to stroll around the duty free shop and get a little something for the parents. You know, being a nice daughter and whatnot.

At somewhere in the close vicinity of nine hours, this flight made up the bulk of the trip. It wasn't the most comfortable of experiences, but I had a surprisingly good time, to be honest. Condor, who I usually complain about because of their limited entertainment programme on board, entertained me for the whole flight.

They had the usual very few watchable things, but I ventured into the audio past of the programming and was truly and very positively surprised. I was able to expand my musical horizon by listening to the latest albums of bands I've been interested in but haven't had the time (read: kept forgetting to) look into some more.

People, it's official: I like Of Monsters And Men. 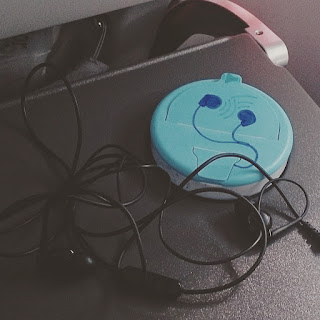 Frankfurt itself was fun. I didn't go into the city like I did last year, because I had a quicker connection. But that connection's direction was unusual.

First, the "fun" I had in Frankfurt.

I'm usually pretty good at security checks and general airport things. I have, after all, done it all often enough. This time, though, and I'm not sure why, I totally messed up. Maybe it was because I hadn't slept for more than an hour (not consecutively) on the plane, maybe it was coincidence.

It was me and my two small bags that had to go through security. And all of us got double checked by Fraport personnel. I made the metal detector beep, for no reason, according to the attending officer. "It just does that sometimes." No problem, I had time. But then, my first bag got a red light in the X-ray machine. Apologetically, I turned to the officer and explained that I was traveling with my 8mm crochet hook. Guy looks at me and says "No problem, that's not what this is about." So I racked my brain trying to figure out what I had in that bag that could be causing trouble and came up blank. Turns out, the rum cake I got for my dad was packaged in a tin can inside the cardboard box I saw - whoops. Not a problem at all, but they did have to make sure I want carrying bomb accessories/ingredients. Then the other bag got a red light. Now I really was dumbstruck, because the other one had been checked at an earlier airport (crochet hook...) but not this one. What could be causing this? I didn't have anything forbidden? I would never take anything through security that could be a problem! - Except for the bottle of waterI got on the other plane and put in my bag. They took the bottle, I took my stuff, and then I walked away with my face redder than the light on the X-ray.

Luckily, I was quickly distracted by an adorable little bookshop I found close to my gate and the lunch I had while waiting for boarding. 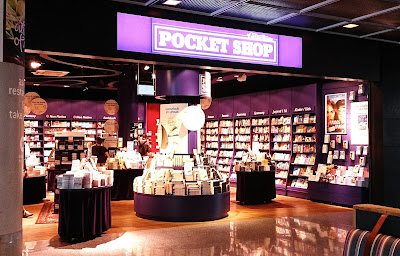 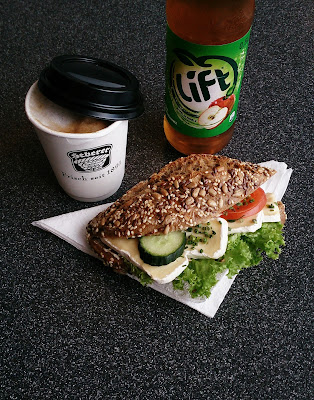 Now to the weird direction connection.

Instinct would send us south at this point, wouldn't it? Vienna is south of Frankfurt, after all. However, that's not where I was going.

I went north instead, to Hamburg. And then I went back down, past Frankfurt, to Vienna. That's somebody traveling on a student budget for you, right there. Going via Hamburg cost less than half of what a direct flight would have cost!

Wasn't a problem, though; I took the opportunity to get a Hamburg magnet for my collection, because back when I went with my dad in 2011 I wasn't collecting yet. Yay magnets! 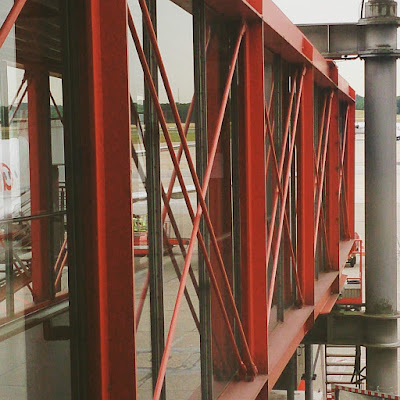 Now on to the best part of this ridiculously long journey: arriving.

For the most part of the trip, the main thought occupying my mind was how much I was going to miss and already missed my little kittie cat (who is at home, being taken care of by a friend who moved into my place for just that reason). Now, finally, something else moved to the forefront. Not that I no longer missed my muppi, trust me, I did and still do. But I had something else to focus on now.

I'd love to tell you about some movie-like moment, where I walked out the double doors into the arrivals hall and my eyes locked onto my family waiting for me and then music played and we all hugged in slow motion... but that's not how life works. Especially when you're tired and not wearing your glasses!

I walked out and saw a sea of people and nobody I recognised, until I heard a familiar voice calling my name. And then again. And again - then I finally found them. Yes, Hollywood, put that in a movie, I dare you.

There they were! Not just my mom and Peter, but also Iris and Wolfgang and Hannah! Hannah was there!!

I can't believe those people. They came all the way out to the airport, all three of them, just to receive me and give me all the hugs and chat for a few minutes. I mean, we all went home then, separately. They literally came out there just for that. I must have been one crazy nice person in a past life to deserve friends like that. Wow. And family of course.

And then about four minutes after I got to the apartment I left again to go see my dad. More hugs. It was great.

Why?
Because family.
Because friends.
And because Hannah was there!!!

Posted by isaontheway at 2:39 PM