In times like these, where we've come to accept that I'm not going to deliver the stories I promise no matter how many times I vow they're coming, really, I'm posting a bunch of stuff over the next few days, I swear, I've got it all prepared and everything, etc... In times like these, we know that a new blog entry means that something extraordinarily exciting/devastating has happened or is in the process of happening or is about to happen. Plus/minus five points on the exciting/devastating scale. As in, there could also be a "moderately" or a "somewhat" before the adjective, it doesn't have to be completely out of this world.

Today, I'm back on this platform to tell you about one of each. And not to apologize for the silence, even if it seems that way, because what's the point?, I'm going to do it again no matter how sorry I insist I am about it.

Let's start with the positive: joy-sharing.

Evelyn and I saw monkeys today! --- Evelyn is an old friend from the golden days of CS Vienna, who's been living in Guatemala for a while now and who happens to have been sent to Trinidad for a few weeks for work. She sent me a message to let me know she was coming and I've been excited ever since. Hadn't seen her in ages and it's always wonderful to meet long-time friends again.

It took two weeks to arrange a get-together, because I haven't been at the top of my game recently (spoiler alert: more on that later), but today finally was the day. I tried organizing something fun as well as interesting for her, you know, show her something really cool and give her all the background info I have as a student and a tour guide. Without a car, though, that's a little challenging. In the end, we teamed up with my friend Daniel and went to Macqueripe early this morning. Early meaning he picked me up just before six and we picked her up at her guest house some twenty-five minutes later (because we couldn't find the place right away). From there we headed West, past a doubles and pie place on the Western Main Road in St James, and went to Macqueripe to see the "famous" bamboo cathedral and possibly go for a dip at the beach there.

Honestly, I'm not sure what I expected from the bamboo cathedral, but it was more than what we ended up getting. Kind of anti-climactic, that was. Nice and pretty, definitely, but not astonishing. And when we got to the beach it started raining, so we went back home. I know, that's not usually a reason to not swim, but the temperature of the water (low!) and basic democracy sent us back to the car and up the road.

How come, then, that this is the exciting part of the tale? The monkeys!

I knew that there were monkeys in some places in Trinidad, but I'd never encountered them before. I thought they might be a myth on the "mainland" and just exist in small groups DDI, down de islands. As in, on some of the small islands in the gulf. But no, they really exist!

As we entered the walking trail into the Cazabon Park, part of the Chaguaramas National Park, somebody told us to "look up, it have a monkey up dey." We looked up and, failing to play it cool, I was immediately reduced to squeals of delight and other similarly embarrassing behaviours that are not really appropriate for anyone over the age of nine. Couldn't help it. Just couldn't.

High up in the bamboo grove, right above our heads, there was a monkey. It completely ignored my invitations to come down and play, but I'm not blaming it for that. We're silly humans, after all. Why would he play with us?

After a while, we did start walking and it's like the monkeys knew the bamboo cathedral isn't that impressive, so they kept appearing from time to time, almost as if to make up for the lack of intrigue of the place itself.

There were even two little monkeys! Tiny, little ones! Hopping around branches after bigger ones! The cuteness was borderline unbearable!!!

Anyway, we walked for a little while, then I got too tired and we had to head back to the car, then the beach didn't work out, but, hey, monkeys! Worth it. 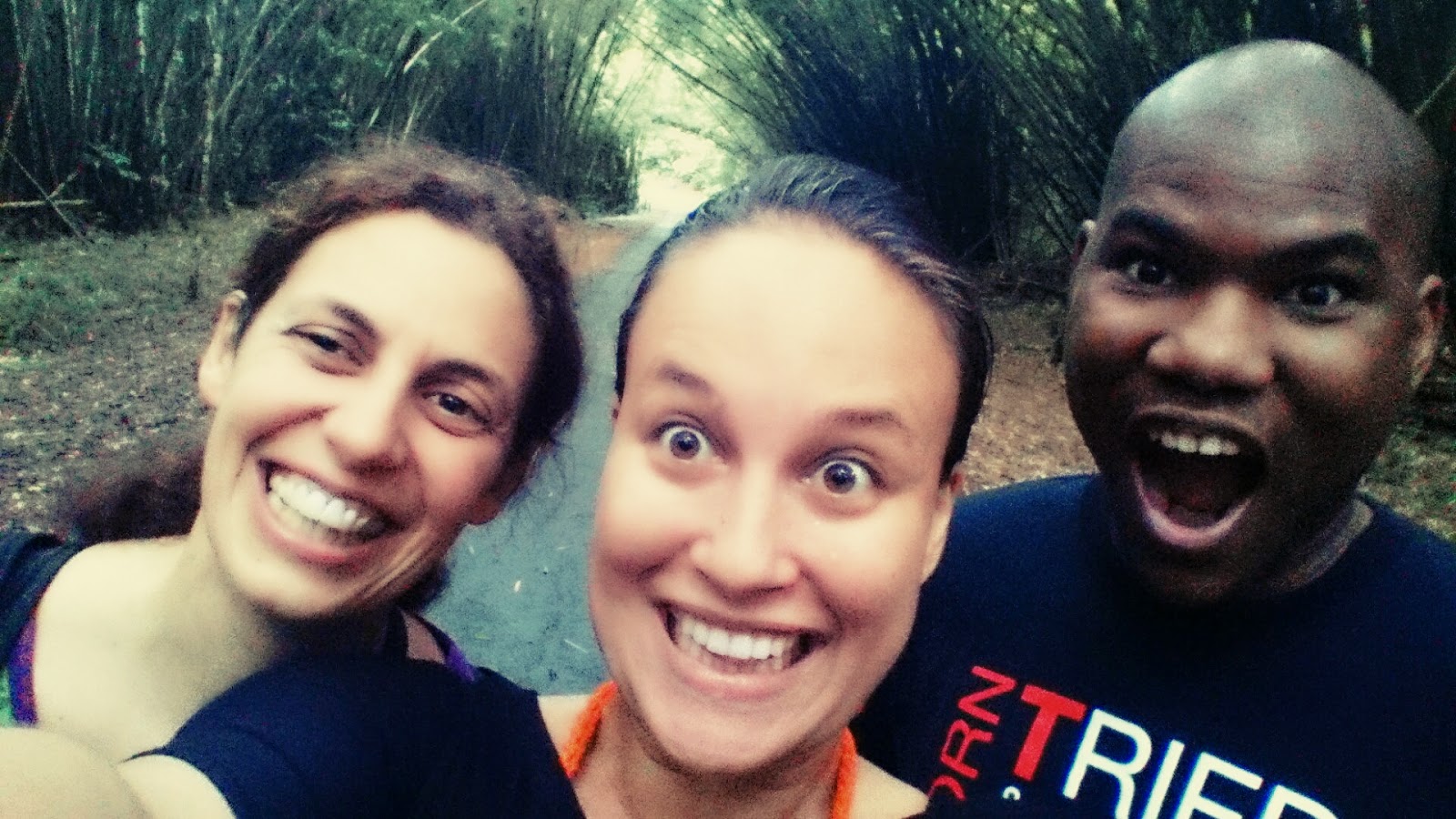 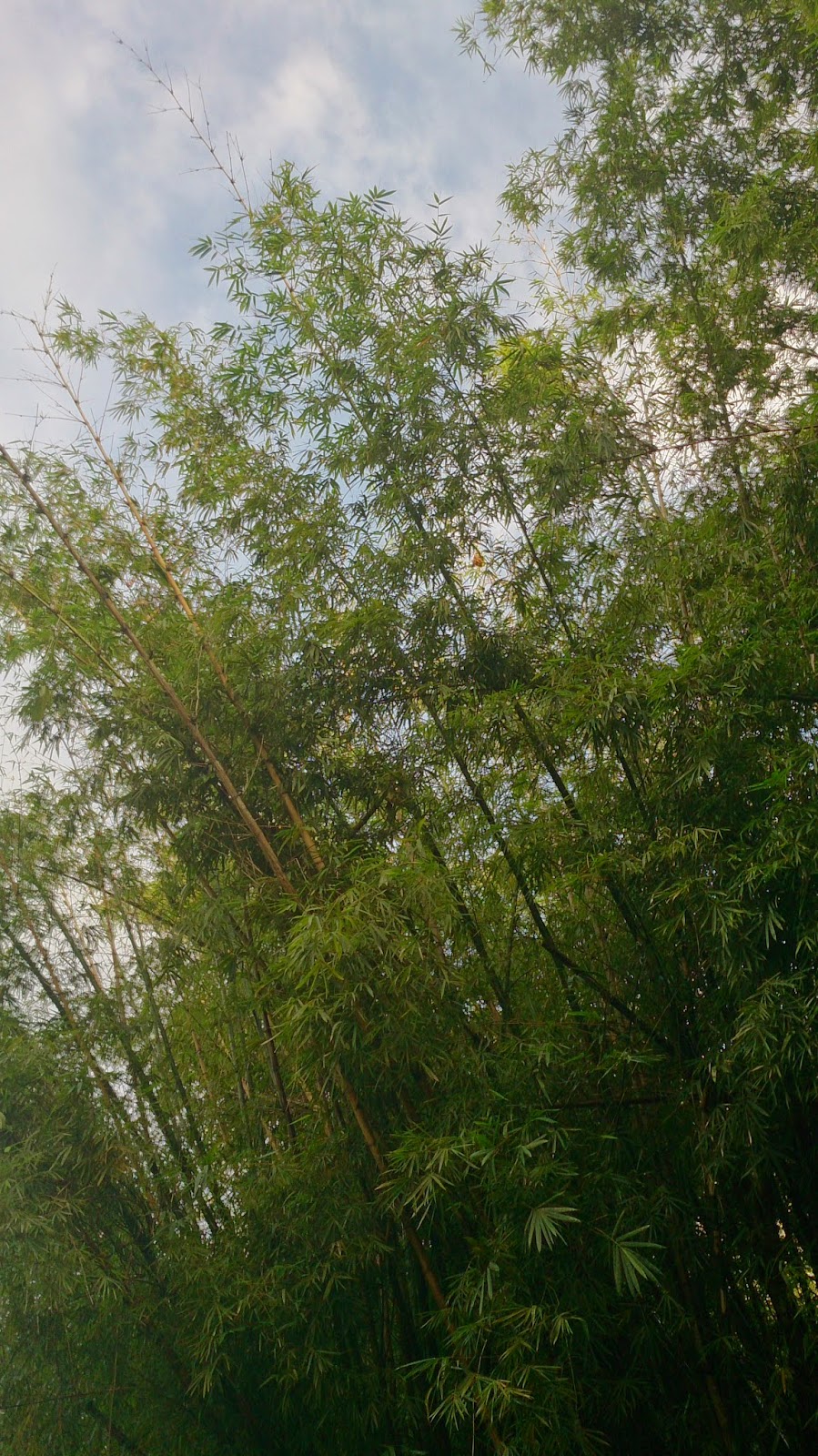 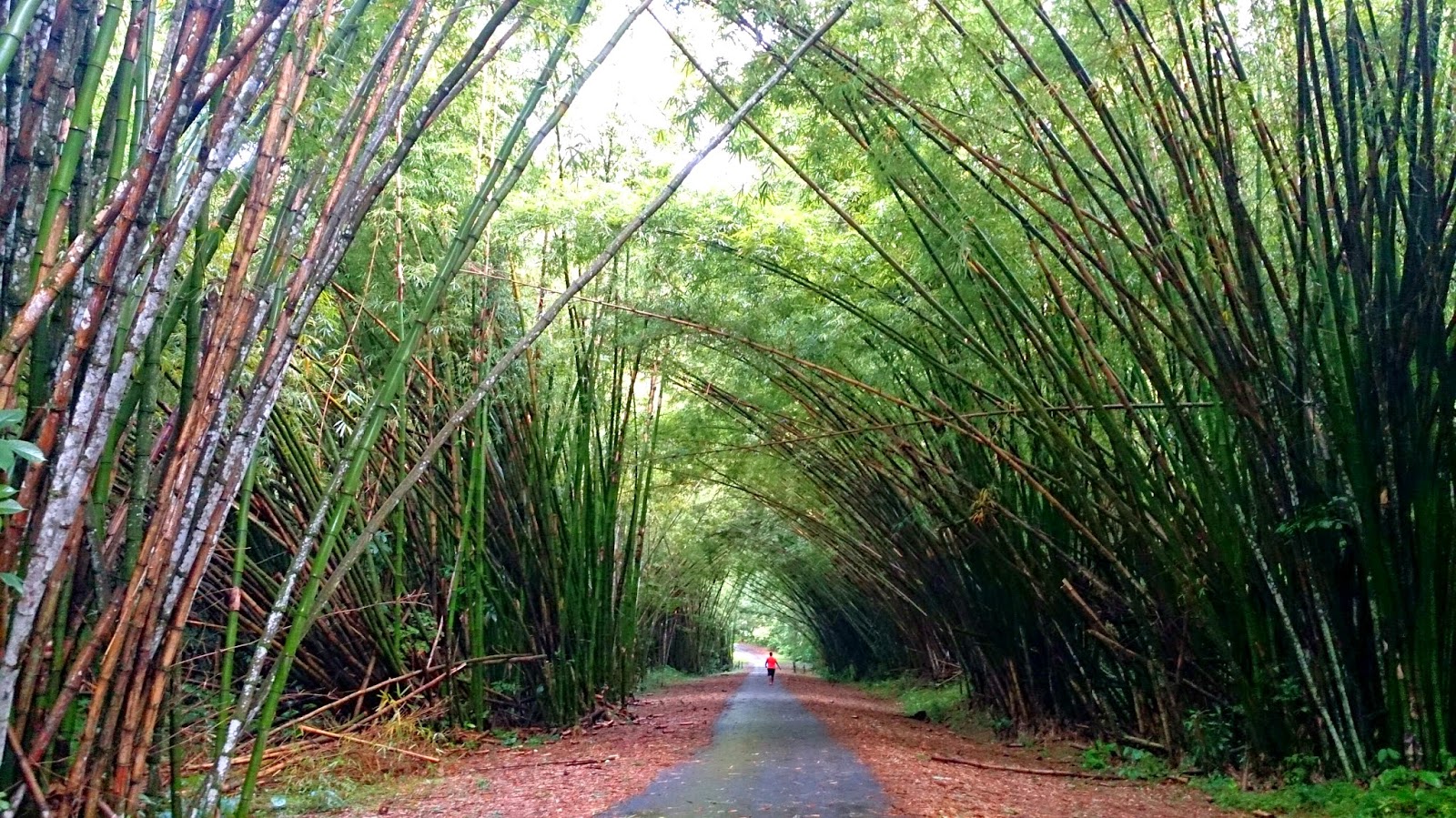 The bamboo cathedral. Not very excited.

Evelyn, I reallyreallyreally hope you had a good time this morning and we'll see each other again before you go back to Guate. Daniel, more apologies.

There's something I need to get out of my system, quite literally. Devastating isn't really adequate for describing this, but a few paragraphs ago I couldn't think of another word to use and neither can I now, so we'll stick with it. I'm sick. Like, sick sick. And I hate it. Like, hate hate.

It started with pain in my back, in the spine, that kept getting worse and worse... I could write a lot about this, but I shouldn't. My back finally doesn't hurt anymore and let's leave it at that. Thing is, though, the medication I got led to a throat infection. A very painful one. And because the immune system was on the fritz already, it spread. Quickly. Impressively high fevers, excruciating pain even when not swallowing or talking (I wish I were exaggerating), and exhaustion. So much exhaustion. Because my body was fighting who knows what - and on five different fronts. And more meds. When you take 17 (no joke) different things over the course of a day, let me tell you, it's no fun.

Anyway. The fifth person I spoke to (doctors and pharmacists involved in the process) finally figured out what was going on and prescribed something that helped. Had to nearly pass out in public first, but hey, better late than never. So that infection is cleared up now, but it left me with another infection. Don't ask me how that works, I didn't really understand the medical talk.

So I'm now ending the third (fourth?) week of this and I'm getting angry. I'm told I shouldn't take anything for this infection (which I welcome, because I'm understandably sick of pills and tablets), but the doc's recommended "rest and hydration" don't seem to cut it either.

For the first time today, the lymph nodes in my neck are not the size of ping pong balls, but they're still swollen and they still hurt. My ears hurt, like needles are being jammed into the ear canals. My throat hurts, but not like before, so that's good. My head hurts, which might have to do with the fever that comes to visit from time to time. It's nowhere as high as before and it doesn't stay as long, but it's nevertheless still here. I'm dizzy when I get tired and I get tired extremely quickly. Whether I'm lying down, sitting, standing or walking only affects the when, not the if. I am feeling sick to my stomach half the time, which seriously affects everything from nutrition to mood.

I made it out of the house and onto campus a total of three times this week and got a minimal amount of work done. When I go somewhere, I have to think hard whether I can walk that far and be up that long. Every time I think I'm better and I can get back to normal life, this thing punches me in the stomach or the ear - or both - and I have to almost literally crawl back to bed. That's how this morning I went from "oooh look at the cute monkey, I love it so much" via "I think I might throw up, please drive slow in case I need you to stop" to "I'm going to buy a club soda to settle my stomach, but could you come into the shop with me in case I fall" and it sucks. It seriously fucking sucks. I hate hate hate it.

I have work to do, but even walking to campus is a challenge, nevermind sitting in front of the computer for six hours. I'm still not hydrated enough, because every time I eat or drink is followed by an inward negotiation: keep it down, keep it down, keep it down. My ears hurt like a motherfucker, even when I try covering them with scarves or shawls to keep them warm and out of any air currents. Everything makes me dizzy. And I am still so exhausted. So exhausted.

I'm already not the best student or the most fun person to hang out with to begin with, no needto aggravate the situation by taking all energy away from me, for fuck's sake! 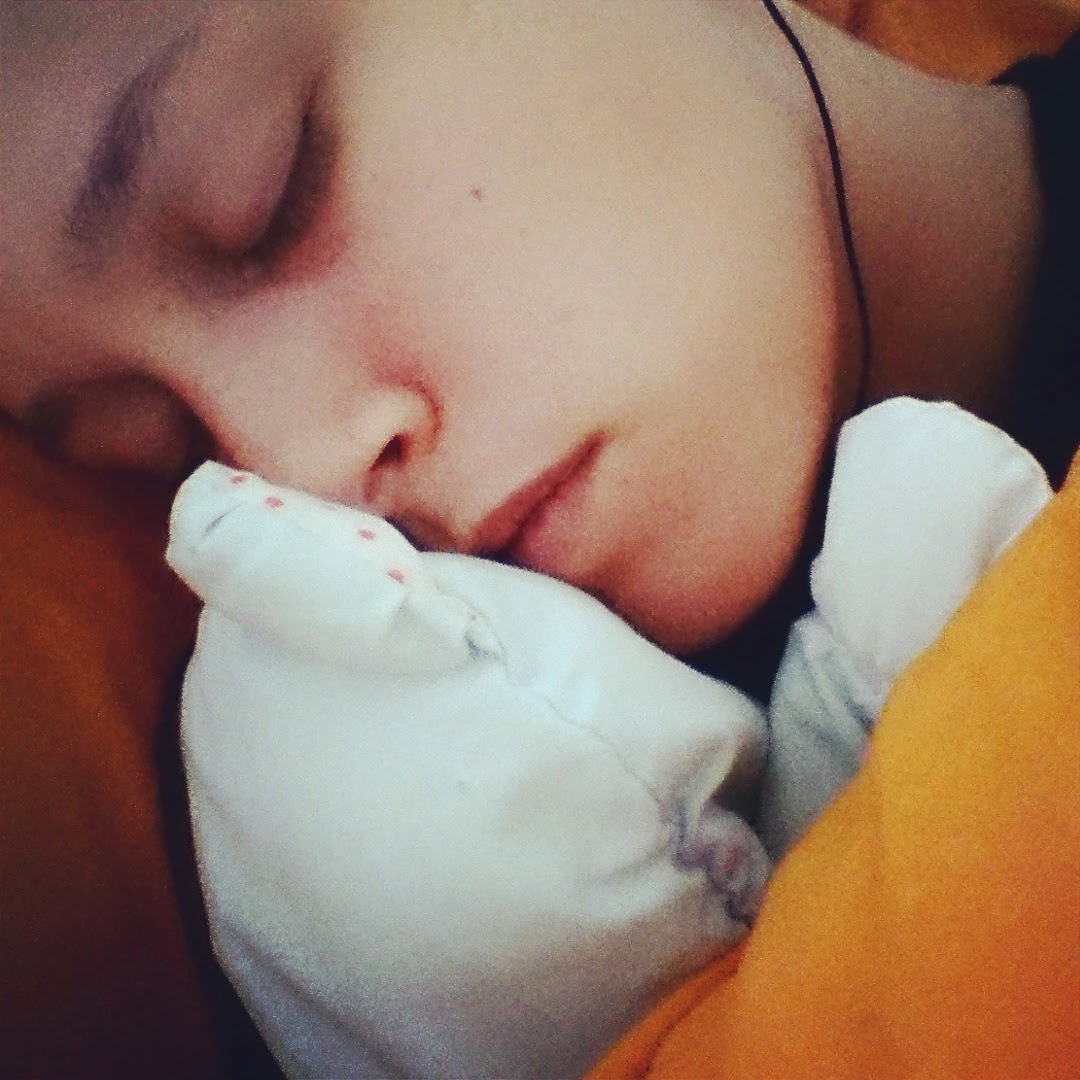 My question at this point is: What the fuck?!

You may think any or all of the following now:
- Stop whining so much and get your ass out of bed and to work.
- Self pity isn't going to get you anywhere.
- Don't be such a fucking baby.

And I understand you. Completely. Because I agree with you. I tell myself these things every day. And I swear I try, I really do. I drink as much water as I can, I try to sleep at night, I read as long as the letters won't jumble on the page, I have tea and vitamins and soup, I try to actually consume those things, I act like everything's okay whenever I can in hopes that I'll fool my body and mind into making it true. But this won't stop and I don't know what to do anymore because I've tried 500 things and it's not going away. I'm past sad at this point. And I'm past frustrated. All I am now is fucking furious.

And exhausted, of course.

So there we have it. A textbook isaontheway blog entry. Something fun with monkeys and humour and something the opposite of fun with pain and a lot of swearwords. Followed the formula down to the last comma.

Posted by isaontheway at 6:18 PM