Excuse the language, but you'll understand when I tell you about today.

Leaving Vienna went more than smoothly, because not only did I use the web-check-in option for the first time, I also got a lift to the airport. Comedy happened twice, too. First, when I was told "your bag is too light, you have to drop it off at the oversize luggage counter. That was funny, because I'm travelling with the bag I normally use as my carry-on and the statement made no sense whatsoever, but the clerk was serious. Second, I am convinced the young man at the security checkpoint bit his tongue trying not to laugh when he asked if I'd put everything in the tray and I said "almost, hold on a second" and proceeded to extract my Urkel-gear from under my t-shirt. Hilarious. He didn't laugh because he didn't want to be rude, I did, because I loved the reaction so much. The flight was almost on time and the heavy-ish turbulence occurred before they served drinks in my section of the plane, not after. All in all, I'd call all of that a success. 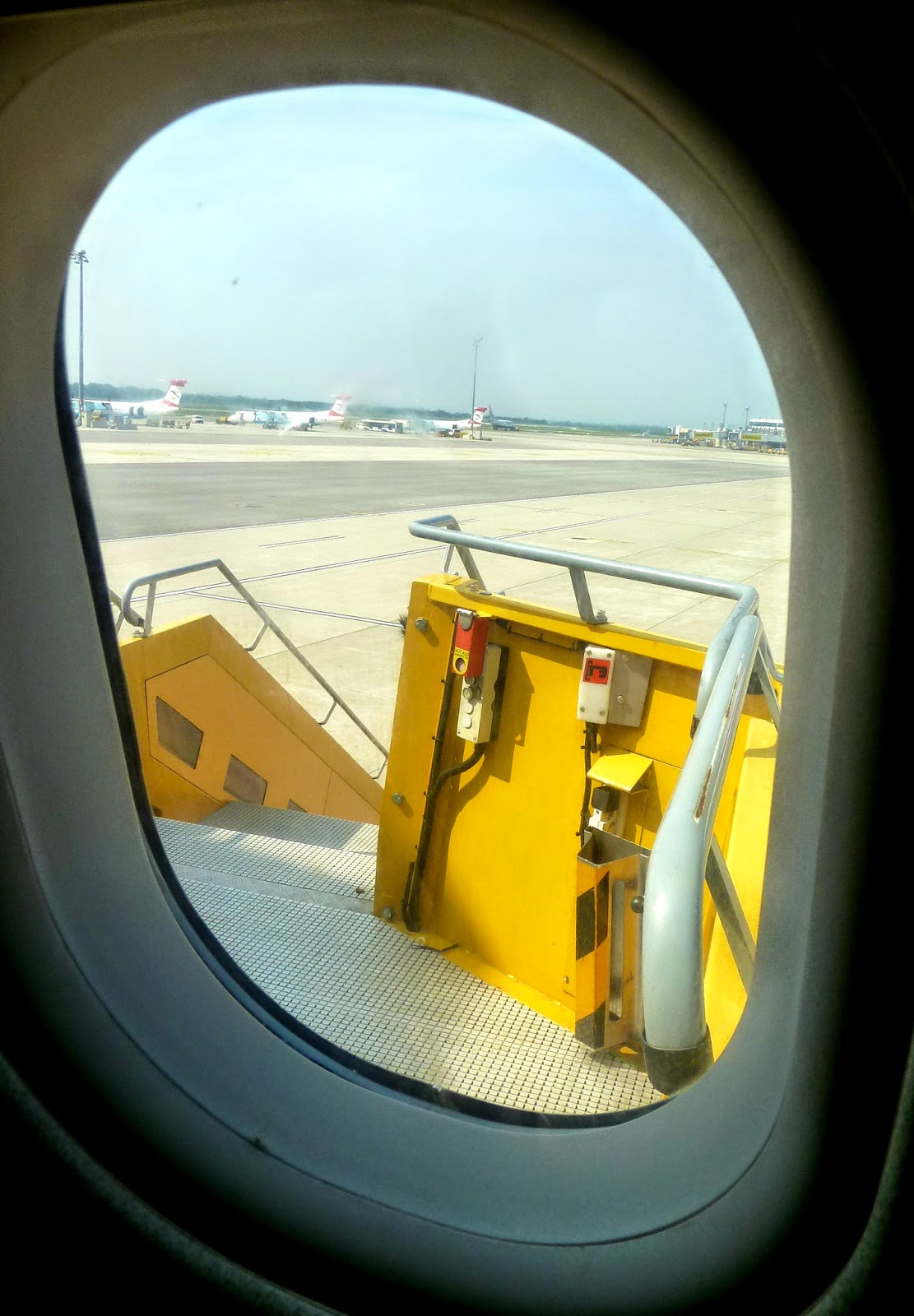 Everybody had to use the regular hose-type entrance attached to the plane's main door, but I got to climb up movable stairs and then in through my window like a secret agent or a spy.

Then we arrived in Rome.

I found out which bus to take into downtown Rome, where to find said bus, and that tickets could be purchased on the bus itself. Take a bus, because out costs less than half of what you pay for the train (terravision is €5, schiaffini is €5 with free WiFi on the bus). But then, the driver said tickets had to be bought from a stall back in the terminal everybody had just exited. I went all the way back to get my ticket and when I wanted to ask if the stall was open, because it didn't look that way but there were people inside, the little #@?!¥ of an attendant didn't even let me ask, assumed I was trying to bother her (cos, oh no, how dare the paying customer so much as think about asking for service) and told me and the other people waiting in line that they were temporarily closed in the rudest way possible. For real. I therefore recommend schiaffini over terravision and advise you to get your ticket in terminal three before finding the station, you'll save time, because, no matter what the infodesk people say, you can't purchase the ticket from the driver. That was also interesting, but we're still not done yet.

I finally made it into Rome and walked to the little bed and breakfast where I'd booked a room (Eleven Star Rome in Via Giuseppe Luigi Passalacqua 26a), and there I was greeted with an explanation of why you should always answer e-mails you get from the online agency where you made the reservation. Because if you don't, your credit card is rejected and your reservation is cancelled. I was sweating by then, because that really is not what you want to hear at any kind of front desk. I'd never gotten an e-mail from expedia.com - but they'll be getting one from me with a big fat complaint. So, mister front desk man tells me they cancelled my reservation because they didn't know if I existed or not, but the room was still available for this first night. Yes, I'm in that room right now (it's nice, I would have liked to stay here). Then he made a phone call to get me a room for the rest of my time here in a friend's bed and breakfast and that was really sweet of him, but after all the information he'd given made about that other place there were so many alarm bells going off in my head - and my stomach - that I couldn't even hear him talk anymore. So I went online - to a different site - and booked a room somewhere else. That's where I'm going tomorrow; luckily, the guy understood and wasn't mad Turns out, his parents also taught him to trust his gut.

Ok, now we're still not done, but it gets better from here.

* I keep checking my e-mail and have not gotten anything aside from the confirmation of the new hotel booking, so I'm 99% sure I have somewhere to go tomorrow.

* I went for a really nice walk around Porta Maggiore and Manzoni and some other big and wide streets lined with trees and with tram tracks in the middle, the names of which have already left my mind. 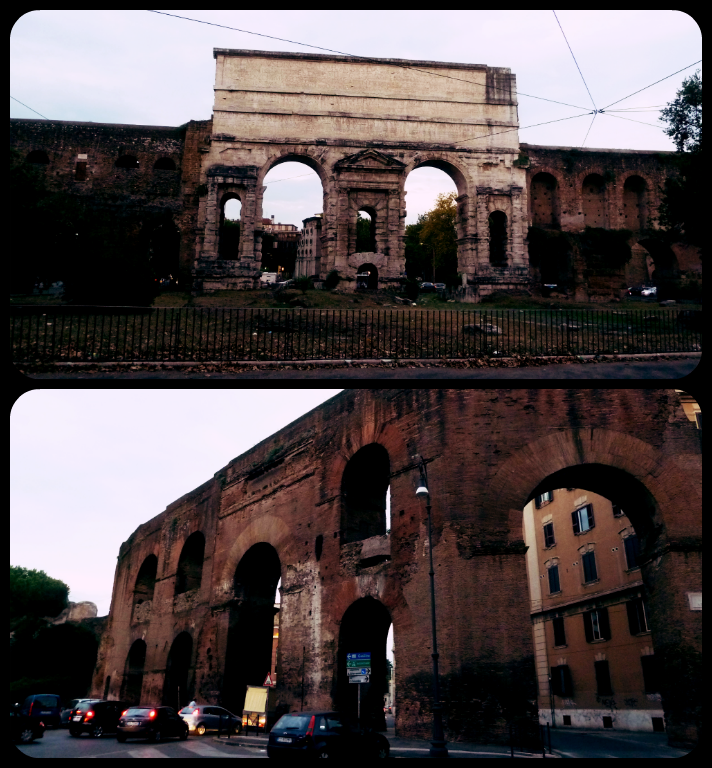 * The weather is super nice at the moment, it's very mild out, so I can walk around in flip flops and no jacket, but it's not actually hot. No need for uncomfortable shoes, yay!

* I got some Fanta Lemon and three different kinds of iced tea made with San Benedetto water. 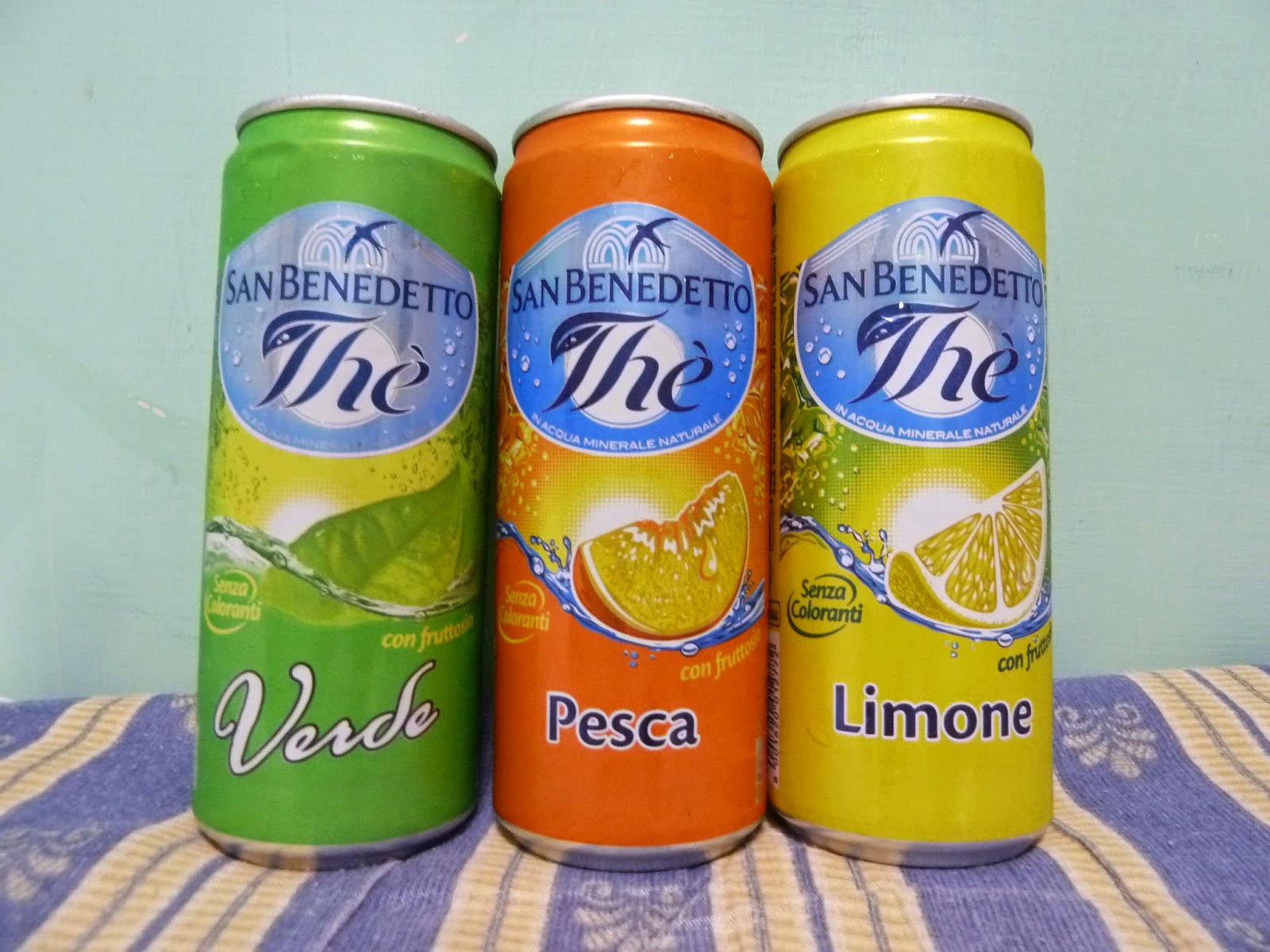 * I got the most delicious piece of pizza from a little hole-in-the-wall-type place on one of those big streets. It had prosciutto, mozzarella cheese, ruccola and fresh cherry tomatoes - and it was so yummy that when I was full after a few bites, I still ate all the toppings and just left all the pizza bread behind. I know, I know, wasting food is bad etc etc etc - but I got a small piece anyway and I'm not going to suffer more than the necessary amount of stomach pains just because you've turned into a humanitarian saint on a crusade against world hunger all of a sudden. I can't always help it, so shut up now. 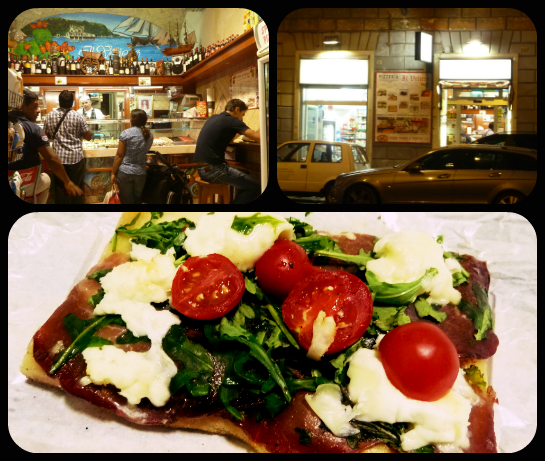 * Of all the people I've met since I boarded that bus - the old man sitting next to me, the helpful guy here in the bed and breakfast, the vendor in the mini market who had the great recommendation for where to get good-not-touristy food (of course I did not find that place, but that's how I stumbled upon the pizzeria), the kind chef in the pizzeria who patiently explained all the different foods to me until I was finally able to make a decision -, not a single one was anywhere near as shitty a person as that little @£§%! at the airport. In fact, they were/are all really sweet.

This did turn around and it was a good day, you know, looking at the big picture (the big picture is antique Roman, probably a Michelangelo). I'm just really curious how tomorrow is going to go and I can't wait to truly start exploring the city!


PS: I took a bunch of pictures, but I took them with my actual camera, not the phone. I can't upload them right now, so I'll add them later. [PICTURES ARE HERE!!!]

Posted by isaontheway at 4:12 PM