Let's begin our exploration of Vienna in a central place that almost anybody who visits the city will see. If you don't, that's weird. And a little impressive. How did you do that? I am, of course, talking about the inner city shopping street Kärntner Straße. 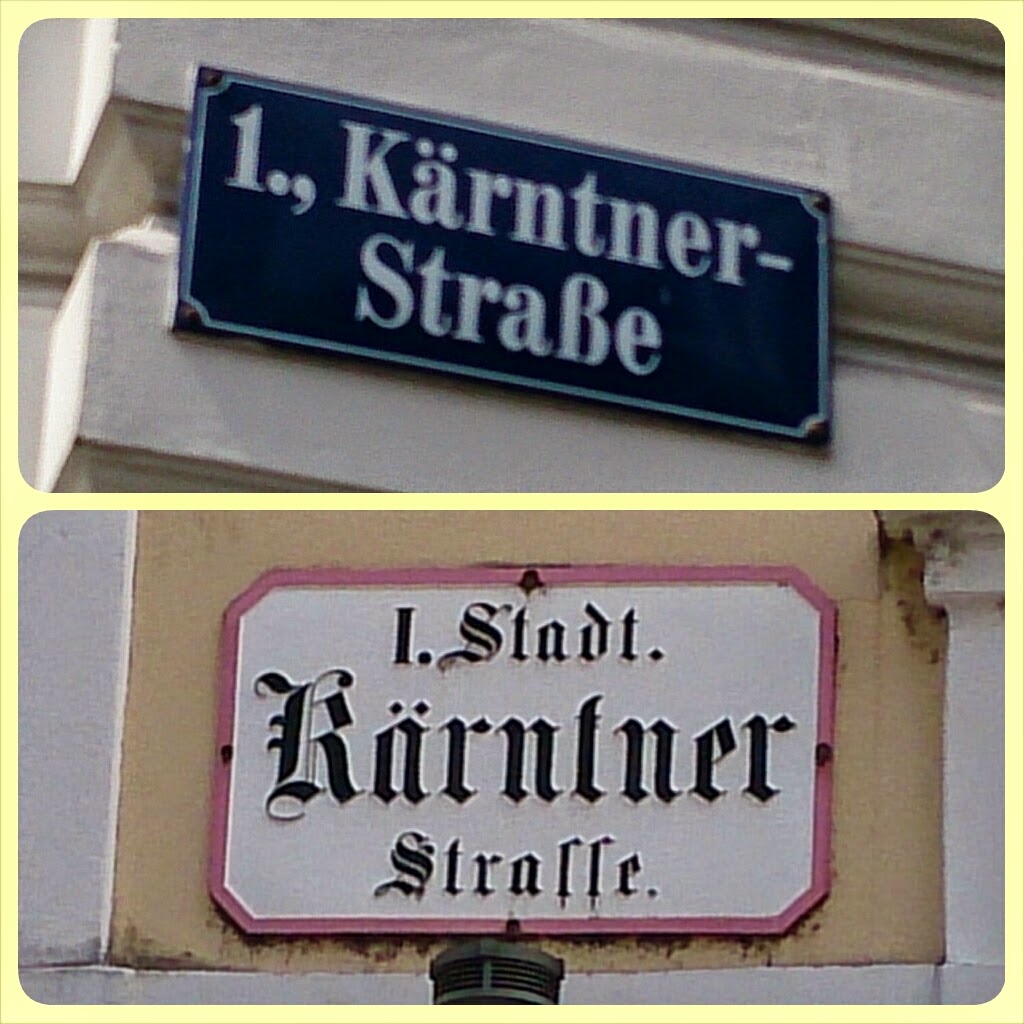 Street signs, a new one and an older one.

The street, which today is frequented by shoppers and tourists in the thousands every single day no matter the weather, dates back to the middle ages. It was first mentioned in an official document in the year 1257 and back then it was called Strata Carinthianorum - Latin name! That's because it goes all the way back to Vienna's Roman times. It only runs from the central Stephansplatz to the state opera, but it was planned as a long distance road, connecting Vienna to Carinthia (Kärnten in German, hence the name) and ultimately to the sea ports in Triest and Venice through a bunch of extension roads. If you walked long enough, then, you could take a nice stroll from the cathedral in the centre of Vienna all the way to the Mediterranean. I wonder how long that would have taken and if anybody tried..?

The spelling of the street name itself changed a lot over the centuries because the language was not yet formalized in the way it is today - and some of the spellings are quite funny (in 1567 it was Khärnnerstrassen). It's been the way we know it today - a pedestrian street full of shops, cafés and too many people - since the 1970s, with the newly designed pedestrian area officially inaugurated in 1974. 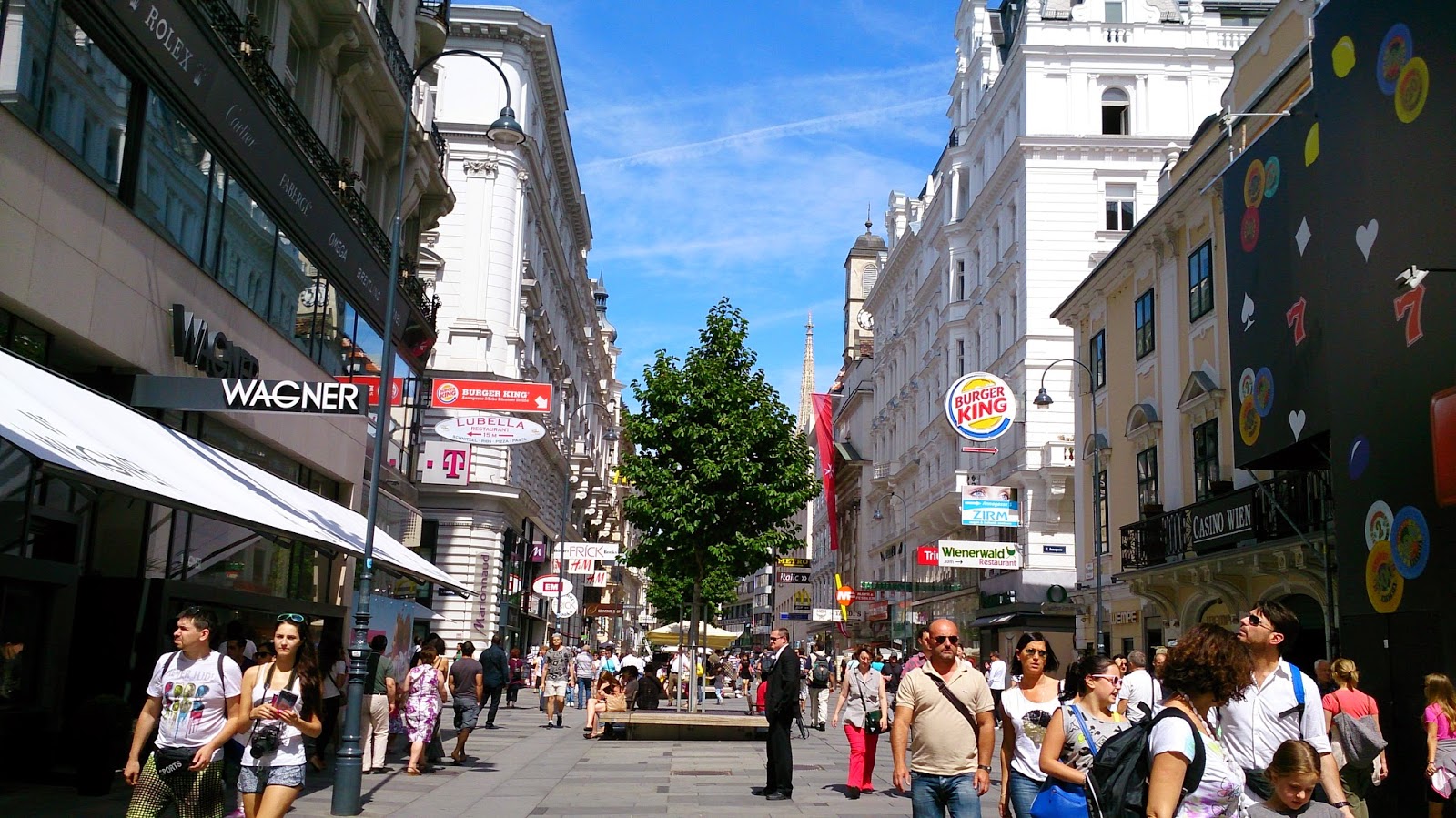 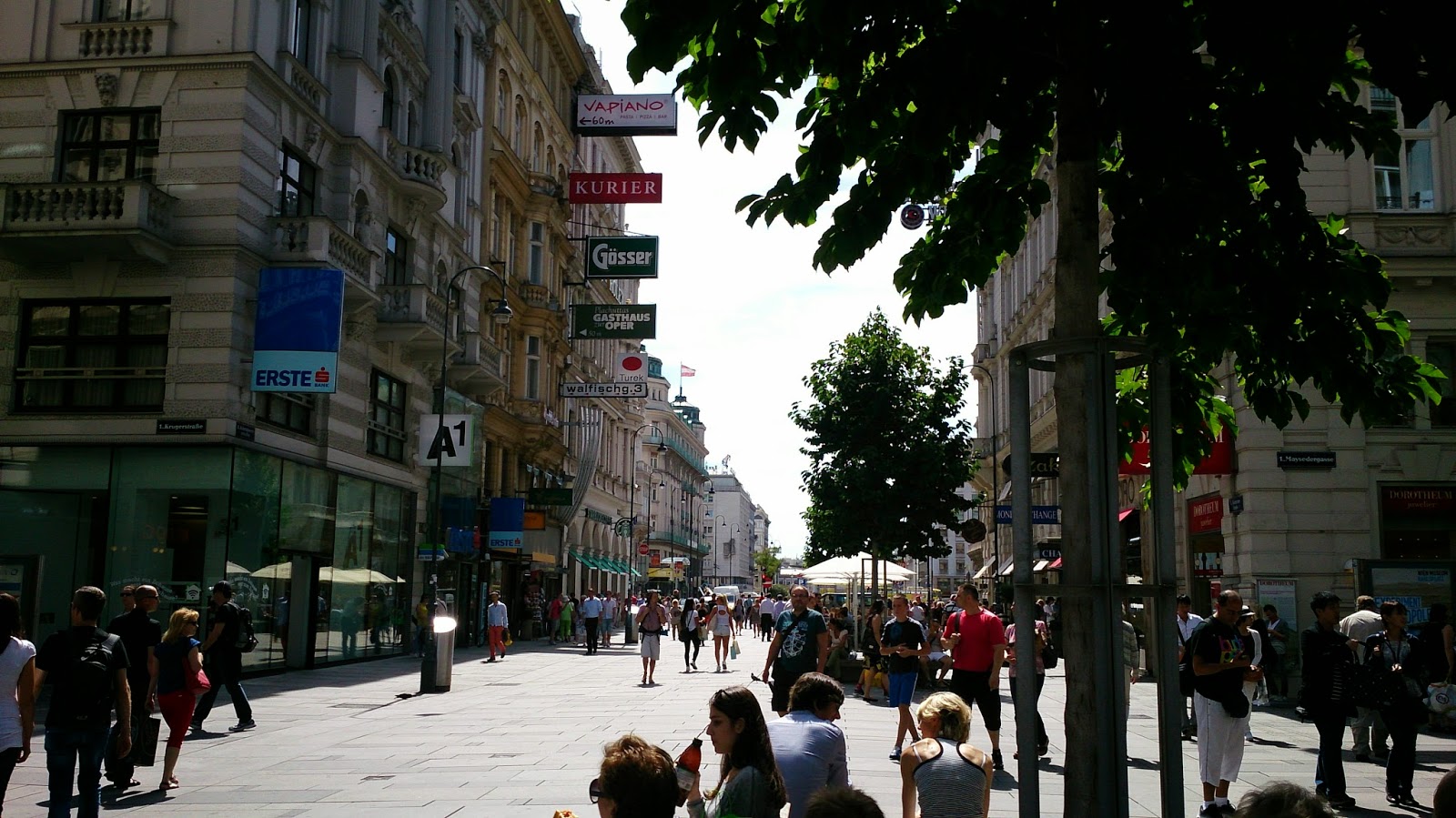 It forms part of the so-called Golden U which is made up of Kärntner Straße, Graben and Kohlmarkt. Have a peek at a map and you'll see why. Back in the day, the shops on all of these streets were equally exclusive (read: expensive), but by today Kärntner Straße is the shopping mile with the most affordable and let's-call-them-mainstream places. Graben already gets a bit pricier and if you go to Kohlmarkt, it's usually just to look at the stuff in the windows and make plans for when you win the lottery.

More importantly, though, Kärntner Straße is the street that connects a million (figuratively speaking) interesting places that you'll want to see if you visit Vienna - or if you live here, it really doesn't matter. The Viennese state opera marks the beginning of the street just off the centre-encircling Ringstraße; the Albertina museum is just off the left side, behind the famous hotel and café Sacher; there are churches and crypts on the street as well as in side streets; it leads up to Stock-im-Eisen-Platz, the Haas Haus building and the impressive St. Stephen's cathedral. So, yeah, worth a visit. And fun if you think about how old it all is, even though it's by no means the oldest place you can find here!

Posted by isaontheway at 4:29 AM