It's official! The King of the Real Austrian Embassy is visiting The Origin for six weeks - starting three days ago! 4 for 1 - four flights for one destination: POS to TAB to BGI to FRA and then finally on to VIE. And here we are!

I haven't been able to blog as much as I wanted to since I left Trinidad, because I don't yet have a computer of my own here in Austria. OMG how is that even possible?! How can you live, crazy girl?! Well, it's just that mine is getting rather old and (breathtakingly) slow and the screen is now officially too small for the work I have to get done on it, so I decided to get a new one once I was in Austria - that's now! Haven't had time yet, however, because I'm busy baking! More on that later.

I left Trinidad just after noon on Monday, 11 August, and reached Tobago that afternoon - flight delays are fun. In Tobago I randomly ran into Chris and had a very intense David After Dentist moment when he tapped me on the shoulder and said hello. "Is this you? Why are you here? You're supposed to be in Trinidad, not Tobago. Am I in Tobago? Is this real life?"

Got over it, chatted for a bit, then I had to leave him as he was waiting in the check-in line to go back to T'dad and I was kicked out of that line by airport personnel. I guess you can only wait there if you're really waiting, not if you already checked in. Oops. 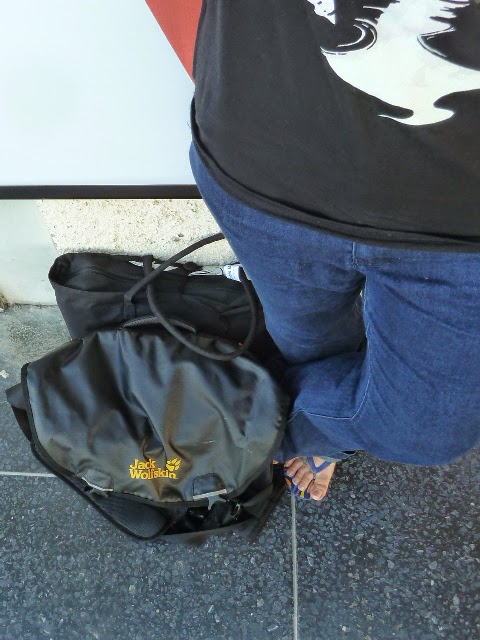 After I was so rudely (not really) removed from the check-in area of the airport, I met up with my friend Zinga who I hadn't seen in forever, because she lives there and I live here and the islands are close, but not that close. You'd be surprised, eh. She came to meet me at the airport, because I still had so much time left until boarding for the next flight, but not enough to go anywhere else. We had quite a good lunch. Fried chicken, but not KFC - it actually tasted good! Took me completely by surprise, as well as her. 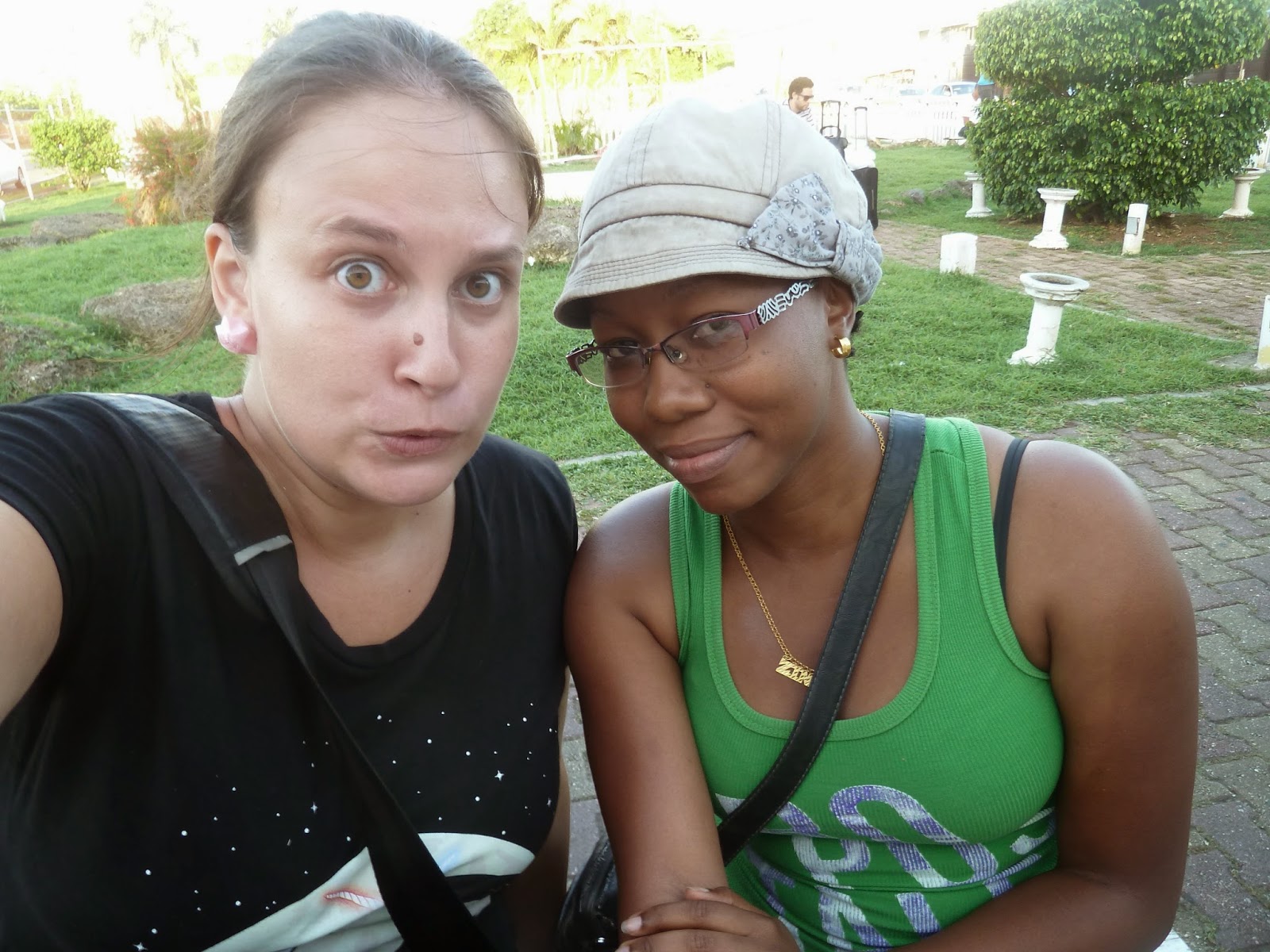 One weird face and one nice face.

After lunch/dinner/whatever kind of meal it counts as, I headed inside to go board the plane to Barbados. There was a problem with the seat assignation on the plane, in that they wanted to give me an aisle seat, which wouldn't have been a problem for the short flight across to BGI, but as we were supposed to keep our seats all the way to Frankfurt... well... that was not possible. Insert panic and drama here. The issue was resolved, then we took off, me in 16A.

Layover in Barbados was fairly short, I just went to buy some Bajan rum for my mom and then sat reading my book. Heard in the background that Robin Williams had died, sad moment.

Then came the long-ish flight to Frankfurt, thankfully (after more panic and another dose of drama) with another window seat: 24K. 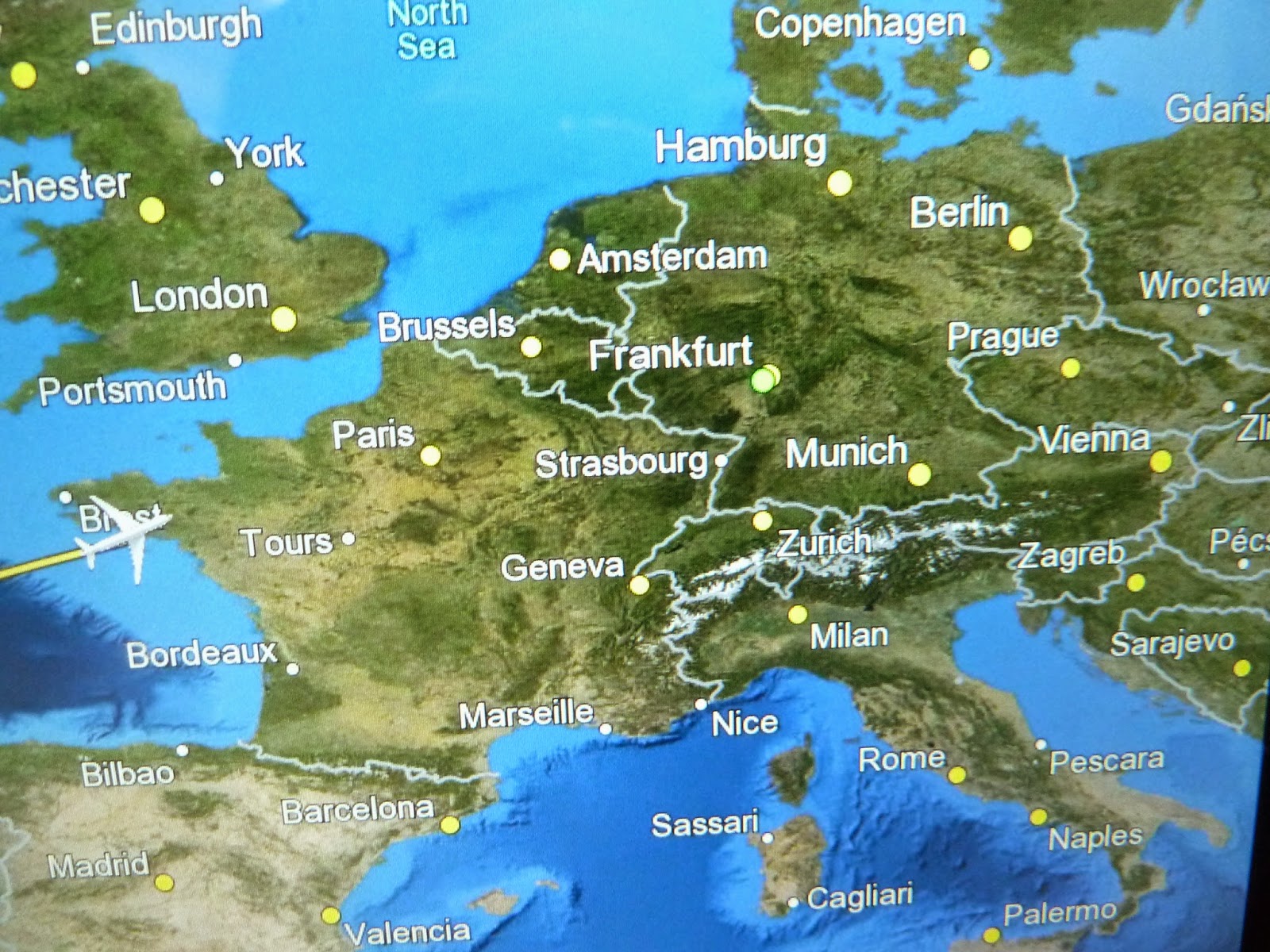 I had quite a long time between this one and the last flight, so I checked in my backpack for the flight on to Vienna and then took an S-Bahn train into the centre of the city of Frankfurt to go for a nice walk and see some of the city. The weather was beautiful, otherwise I would have stayed in the airport with my book, but this way I got to do some sightseeing and touristing on the way home.

Came back to the airport very hungry, because it had been a surprisingly active day. Therefore, I got to buy the kind of sandwich I haven't had even the remotest access to for a year! Lye bread, with turkey and cheese, and cucumber and tomato and lettuce. Yes! Definitely a very good start into the culinary part of my stay here in Europe.

Actually, in terms of food, Frankfurt made the perfect middle point between Trinidad and Austria, because I saw pieces of either world in the few hours I spent in the city. 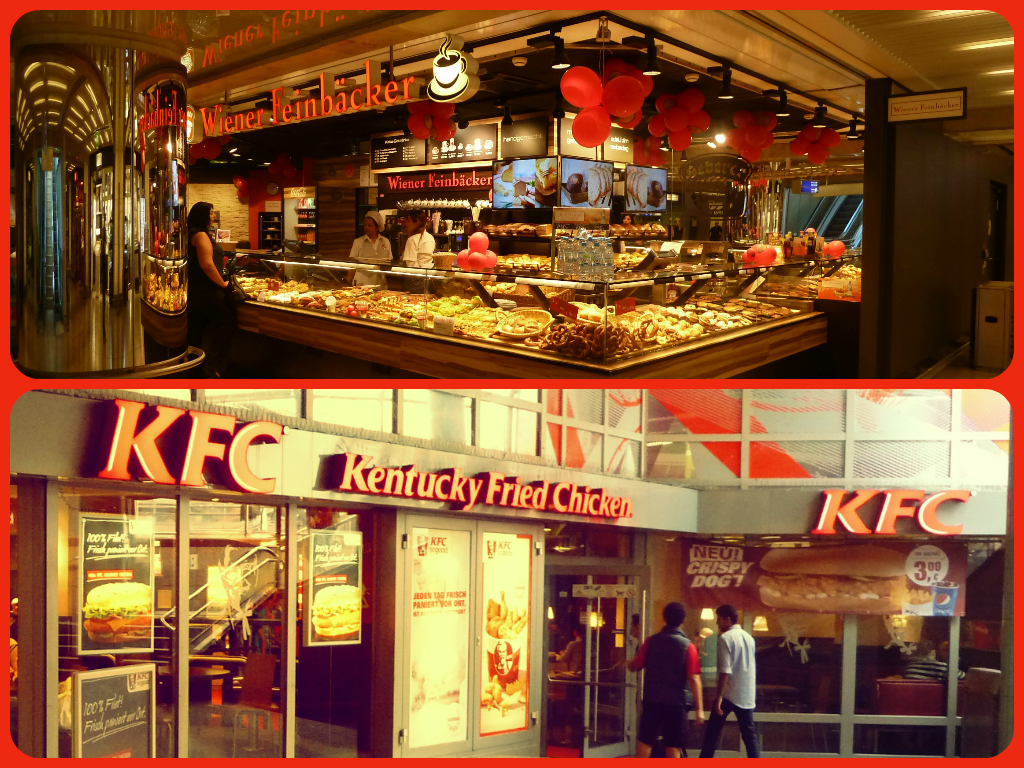 Quick sidenote: On the way back to Frankfurt International Airport (the biggest employer in that German state) I came across something my Trinidadian friends will love. No worries, I took a picture for you. This is going to turn Frankfurt, Germany, into the number one tourist destination for Trinidadian travelers worldwide. You know how you all love Maggi so much you put it into every meal, use it with every recipe, and (many of you) are even convinced it's a Trini thing? It's not, by the way, it's Swiss. Check this out: 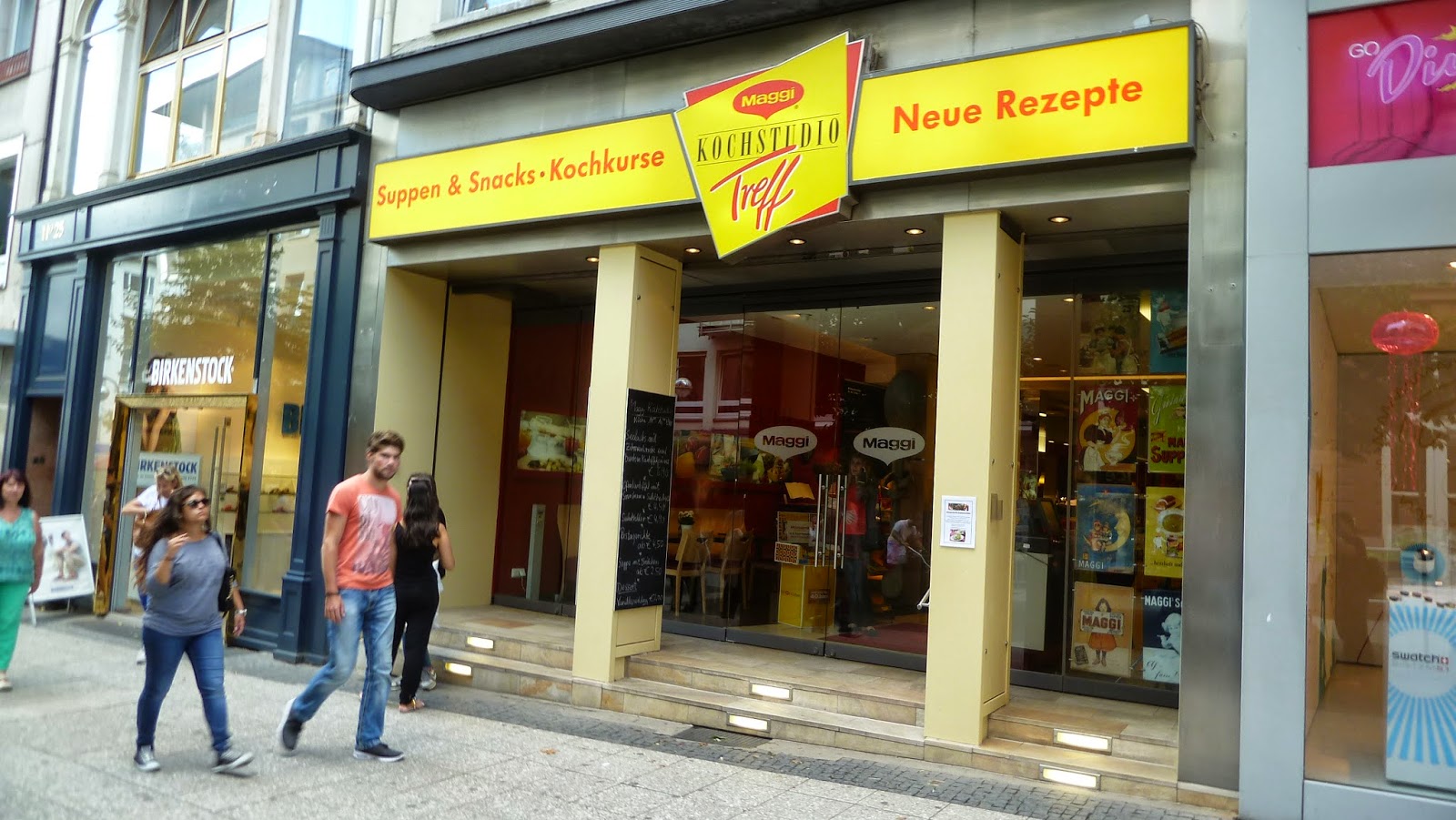 Finally, FINALLY it was time to go find the gate to board the flight to Vienna - I was now about two hours away from Vienna and my family. Flight went by quickly, with me mainly just staring out my window (yesss) to see if I could spot anything Austrian already. I didn't have to go through any passport controls anymore, because I was officially coming in from Germany and the enter-Schengen-transactions had been taken care of there. My backpack was the first bag to appear on the baggage rolley roundabout thing. Then: hugs. 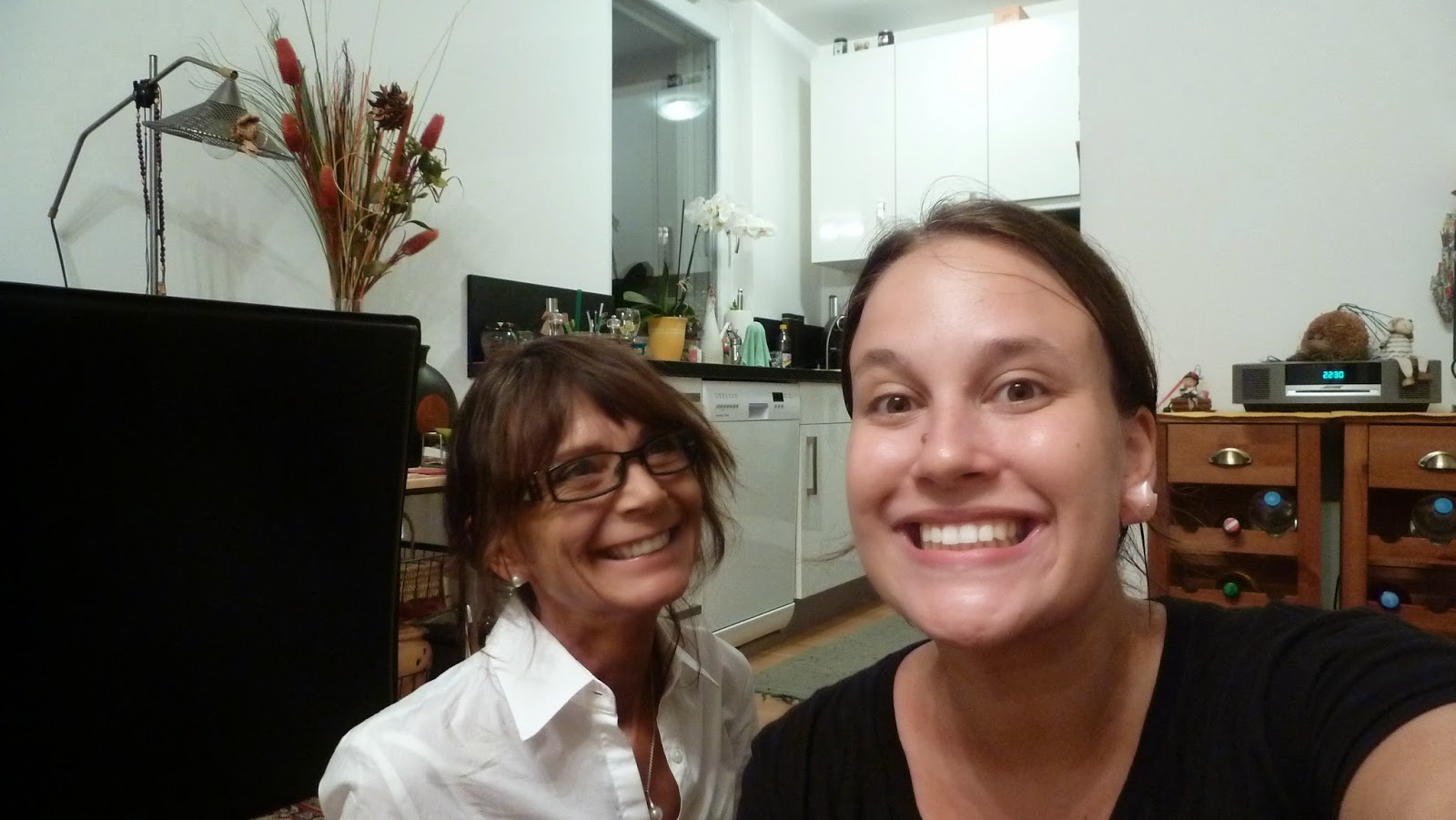 We're both pretty happy in this picture.

And now, the oven is calling and I have to get back to my baking.
But more on that later.

Posted by isaontheway at 8:41 AM