Nature is a Spa II

Jump from day two to day one and now we're on day three of my trip to St Vincent. Another spa day. That was necessary and well deserved after the hike and even then I still worked for it. Yay for deserved relaxation!

This time I went to Young Island. I'd heard that there was a ferry and that it was free, but I still wanted to see if I could just swim across instead of taking the boat. Another one of those moments where I had to do something because I needed to prove to the world (really, myself) that I was able to do it. But worry not, it's not a long swim, as you can see in the first and second pictures. One is Young Island from my hotel, the other is towards my hotel from the island. 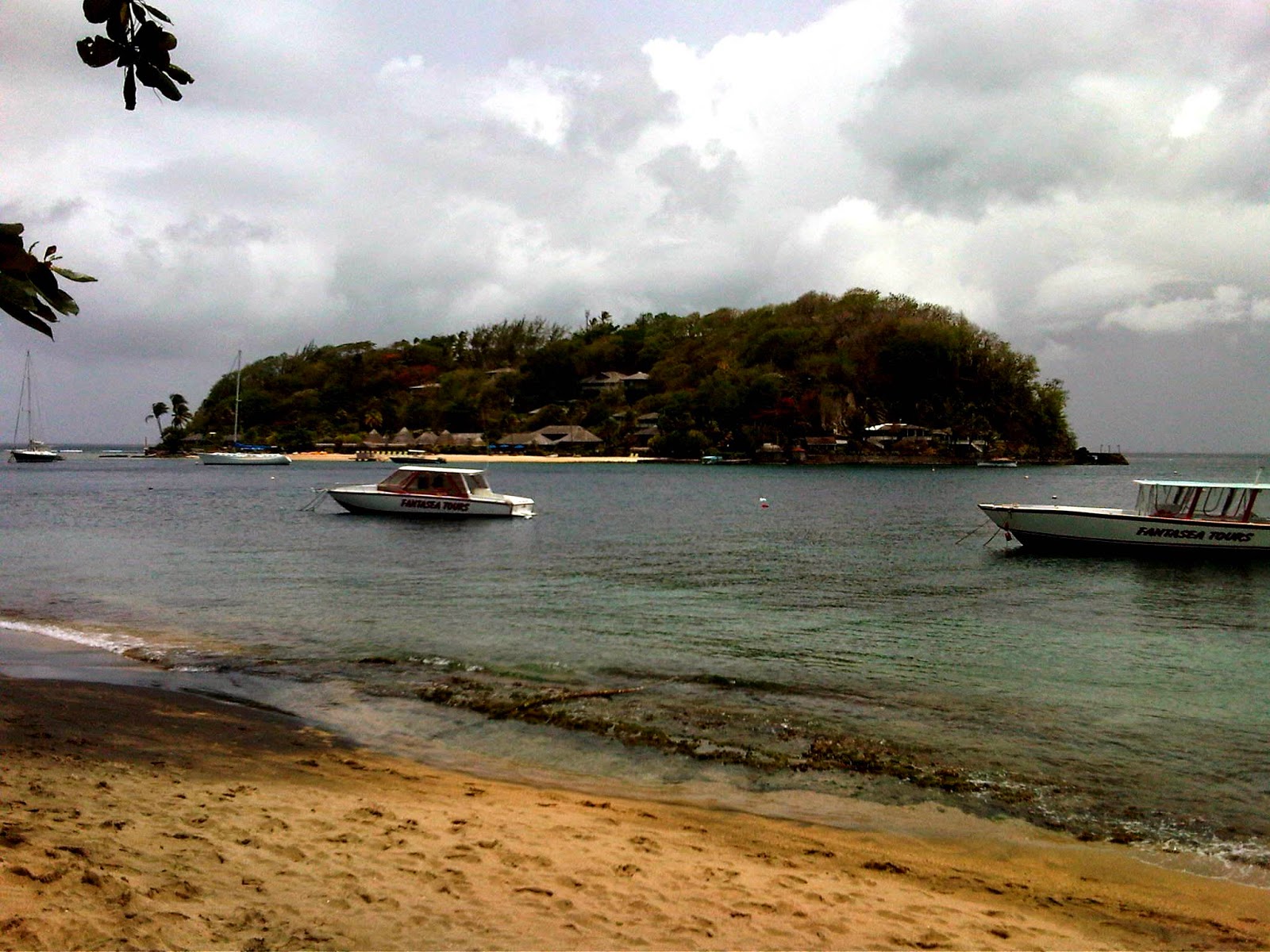 These pictures were taken... 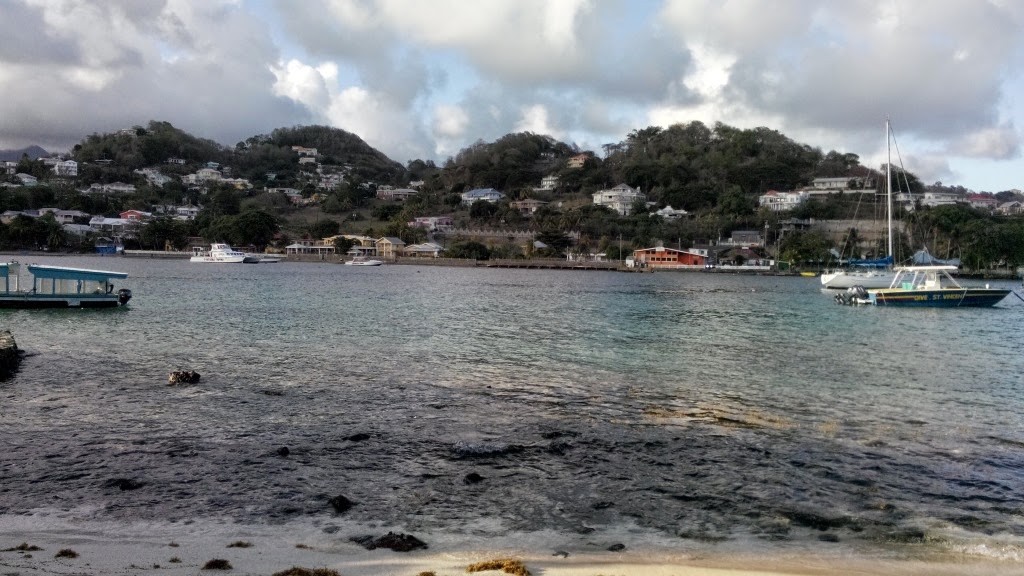 I had to swim diagonally, because there was a surprisingly strong current just under the surface of the water, pulling in the opposite direction as you'd assume from seeing the wavelets. It's the tide pushing and pulling through the little channel.

When I swam across, the tide was low and the sun was high and so was I. High on life! I was happy I'd made the swim across, even though I just said it wasn't that far, I loved the white-ish sand and the postcard-quality water and the fact that there was nobody else there. There's a hotel and some employees walked back and forth between the different bungalows and to one side of the beach the ferry operator sat in a little hut with a security guy. But nobody was on the beach itself. I was completely by myself there. 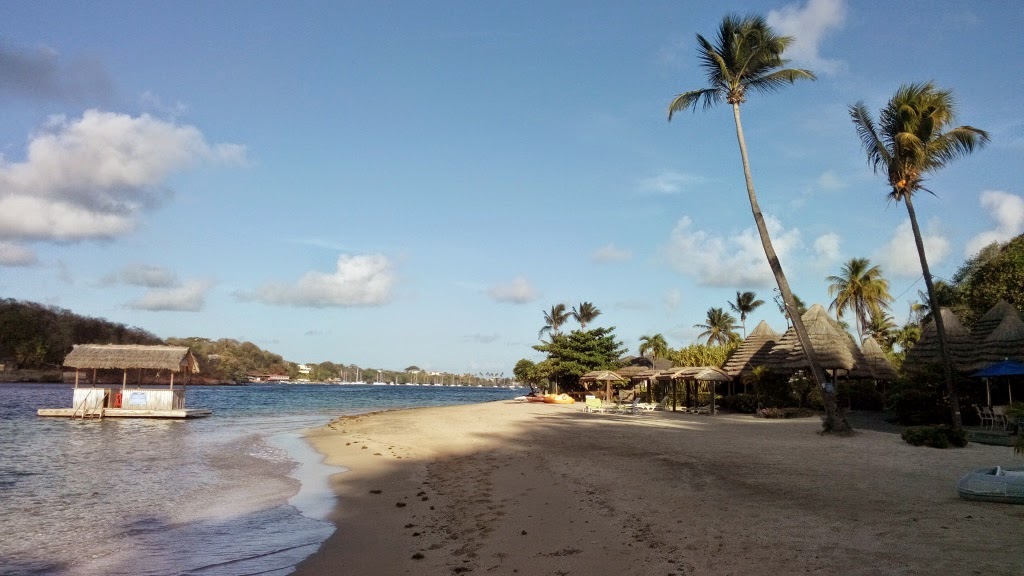 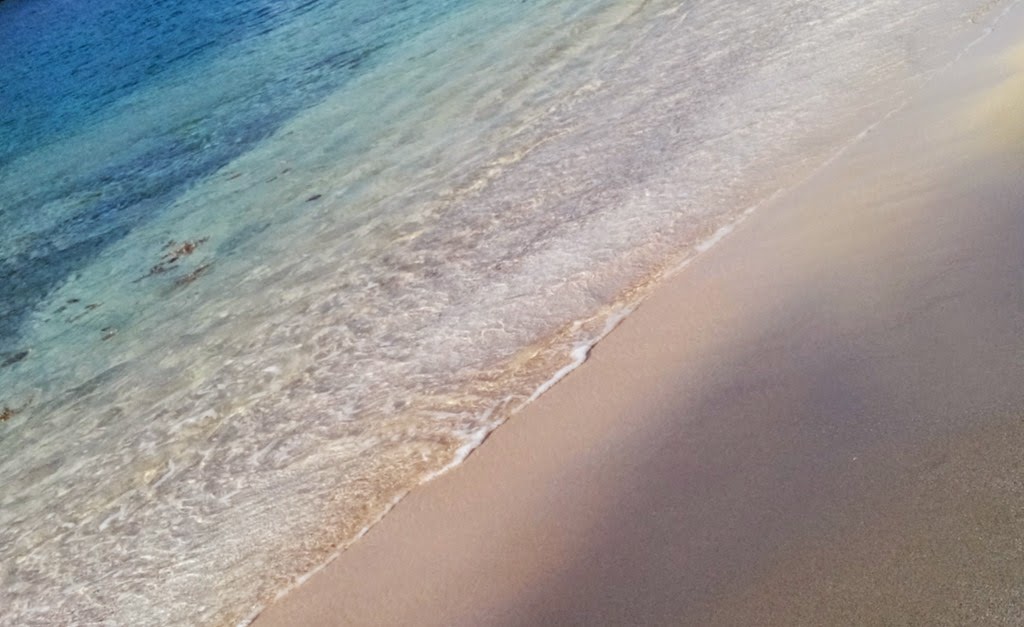 These pictures were taken later that day, when I went back across again for just five minutes with Carl, because I hadn't been able to take pictures when I was there earlier. First, because my camera was in Trinidad and my phone had died the previous day. Second, because I swam across, so no matter what I wouldn't have been able to bring anything. That's why the shadows are longer and the water isn't as clear and sparkly, simply because the sun's shining at a much lower angle already.

I hit land just next to that little cabin thingie in the water and immediately started giggling. Out of sheer excitement! It had been ages since I'd been on a beach that nice and it was exactly what I'd been hoping to find in St Vincent. Had I not been introduced to Carl by Clevon and had the awesome opportunity to experience all the great adventures I did, this is where I would have spent my time: Pack the kindle, the hook and yarn, a bottle of water, a little money for a fruit punch or a juice... hop on the ferry... enjoy the beach by myself all day every day... hop on the ferry... sleep. Yes.

What I got was better, of course, but I did make the most of the morning I spent over on Young Island. I lay back in the sand and closed my eyes for a little while, soaking up the sunshine and relaxing. I swam and floated around in the turquoise clear waters around the cabin/hut. I exfoliated my whole body with the salty sand I was sitting on - my skin hadn't been that soft all year, I swear. Went back in the water to rinse off the sand and float on the tiny waves some more. That completed my St Vincent Spa Experience, first the massage and then the body scrub. And all free, because even if you don't swim the ferry still doesn't cost anything.

Then I walked around the beach to explore and I found Sebastian! Yes, Arielle's friend! 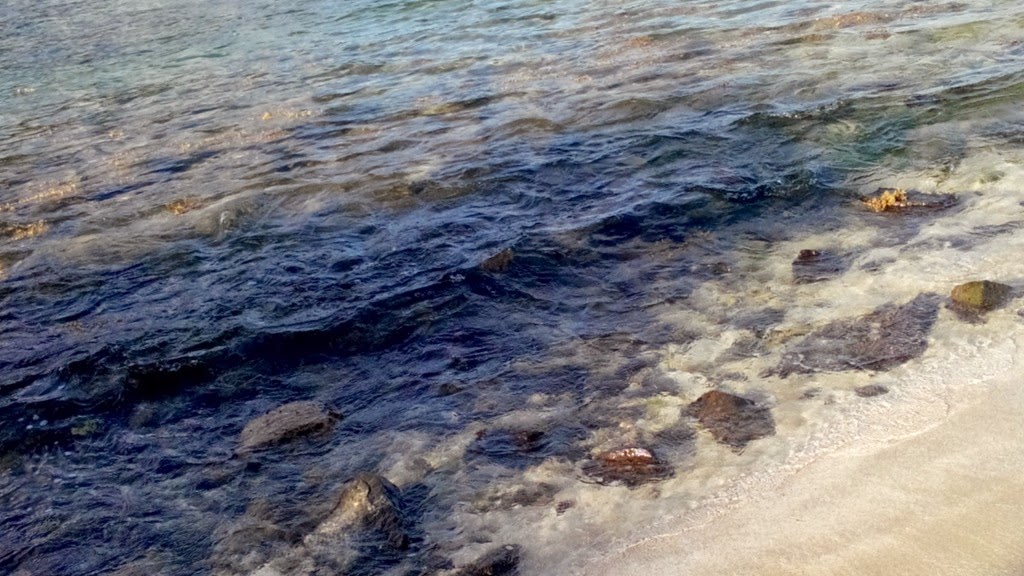 When I was there alone, as the tide was low, these rocks here were almost completely outside the water, above the surface. And they were full of teeny tiny hermit crabs (and by tiny I mean tiny, like the size of my thumbnail) and some other crabs, Sebastian, and a bunch of sea urchins. I spent probably fifteen minutes just crouching next to the rocks and observing the little creatures scuttle around. So cute! I even picked one up (another prove-that-I-can-do-it thing, because I'm not not scared of creepy crawleys), but he didn't like it very much so I put him right back down with his buddies. Later, when I came back with Carl, the tide had come in and the rocks were covered in water, so I couldn't introduce him to Sebastian. Would have been cool.

Want a relaxing spa day to take some years off your face and body? Young Island carries that name for a reason, I say.

Then I took the ferry back and had to sit on the plain wooden bench instead of the nice cushion, because my bathing suit was all wet. Still worth it!

Posted by isaontheway at 1:53 PM