We strolled up the side of the volcano, taking some nice pictures on the way, and when we made it to the top it was so anticlimactic (See what I did there?) that the only thing keeping me from falling asleep out of sheer boredom was to work on my latest crochet project. 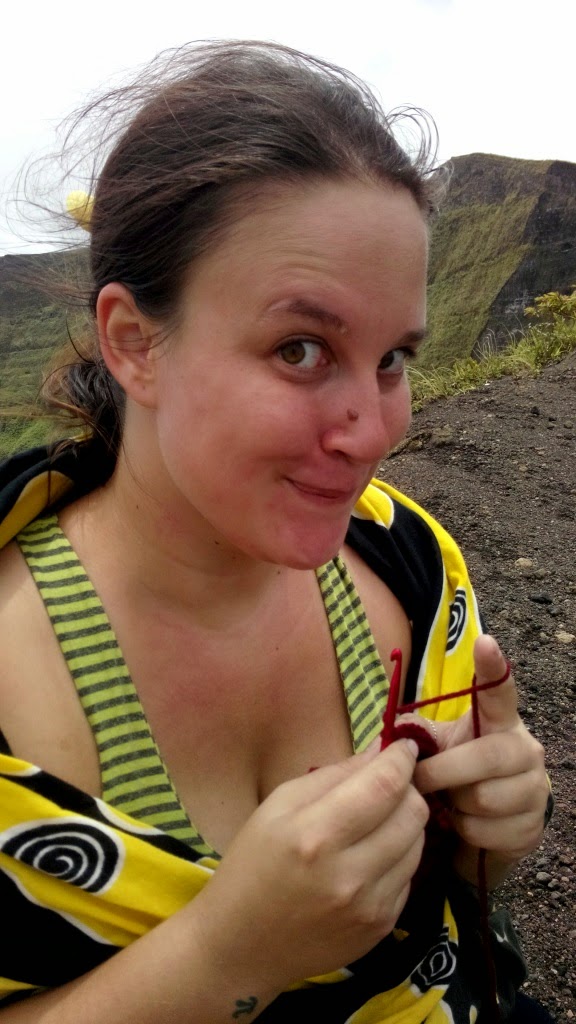 Yeah... Obviously, that is not the truth.

Climbing La Soufriere was one of the hardest things I have ever done and actually making it to the top made me feel like the King of the world, instead of just the King of The Real Austrian Embassy.

I would never ever have been able to make it up there on my own or with a group of people walking up with an official guide from some tourist agency (on account of how much I hate holding people back, I wouldn't even have started because I would have known I'd slow a group down). I am the luckiest person in the world, because I have friends, like Clevon, who present me to people, like Carl, whose people skills are so exceptional that they are able to get me up that volcano. I could lie about this, or not tell you anything, but you're so used to my unnecessary honesty and frequent TMI-cringe-inducing confessions, that I'm going to keep that up now. (I love to make you cringe.)

For me, personally, the hardest parts were the first quarter and the last, umm, maybe 10 percent. The path in the beginning is very deceiving, it makes you think it's all a walk in the park - literally - but then you see the first steps and you remember that one word from the national park's information website for hikers: hard. I'm not in shape, like, at all. Remember all the times I've bragged about what a granny I am? Well, it's not an exaggeration. So once we were on the steps and all the power had to come from my thighs I became slower and slower until I had to sit down for some water and some calm breathing. This next picture is from the dry river bed, which marks about a quarter of the way. 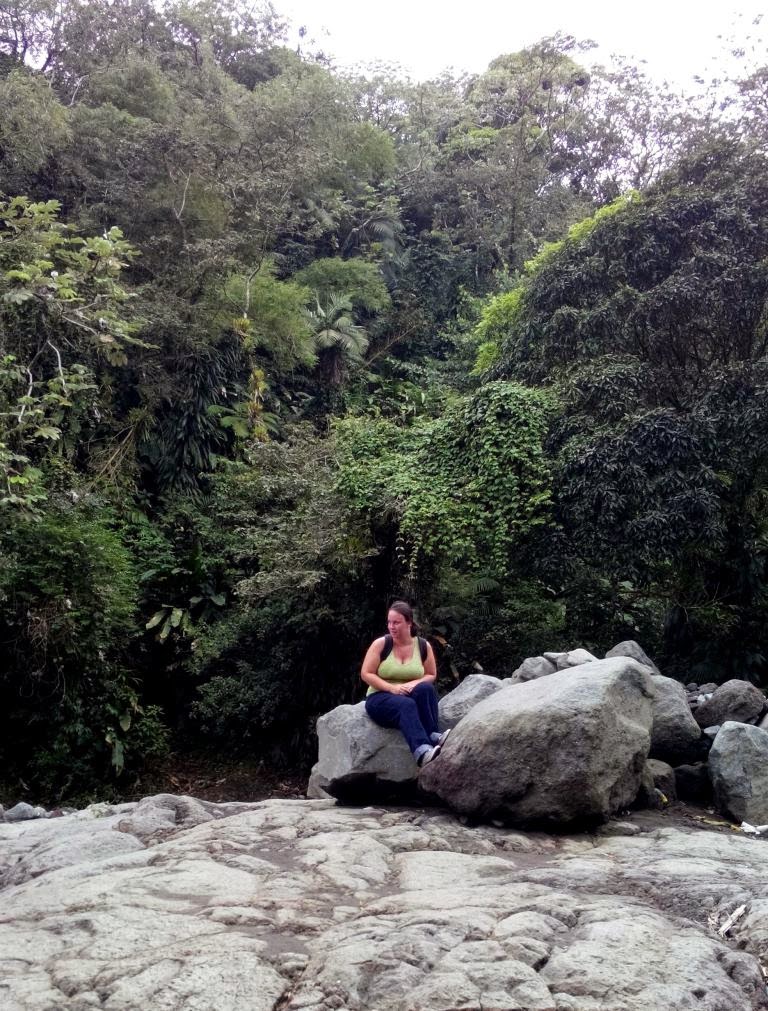 There are more steps after that river bed but then after a while the path evens out a little bit and while you still ascend, it's now just walking upwards instead of actually climbing steps. That's the halfway mark. The next picture, that was the first time I smiled a real smile since the beginning of the trail. I was feeling better there. And I went steadily uphill (See what I did there, again?). Look at that view! Can you see how far up we had already reached? That's the coastline and the sea down there. It is one of the most incredible things to be hiking up and up and up and then you turn around and you see the progress you've made... nothing motivates like that. You can see, however, that I'm pretty red in the face and even on the chest and arms. That's what I look like when I'm exercise-tired. But we kept going. (Duh. It would have been pure foolishness to turn around at that point, now that we'd come so far and it was finally getting easier.) 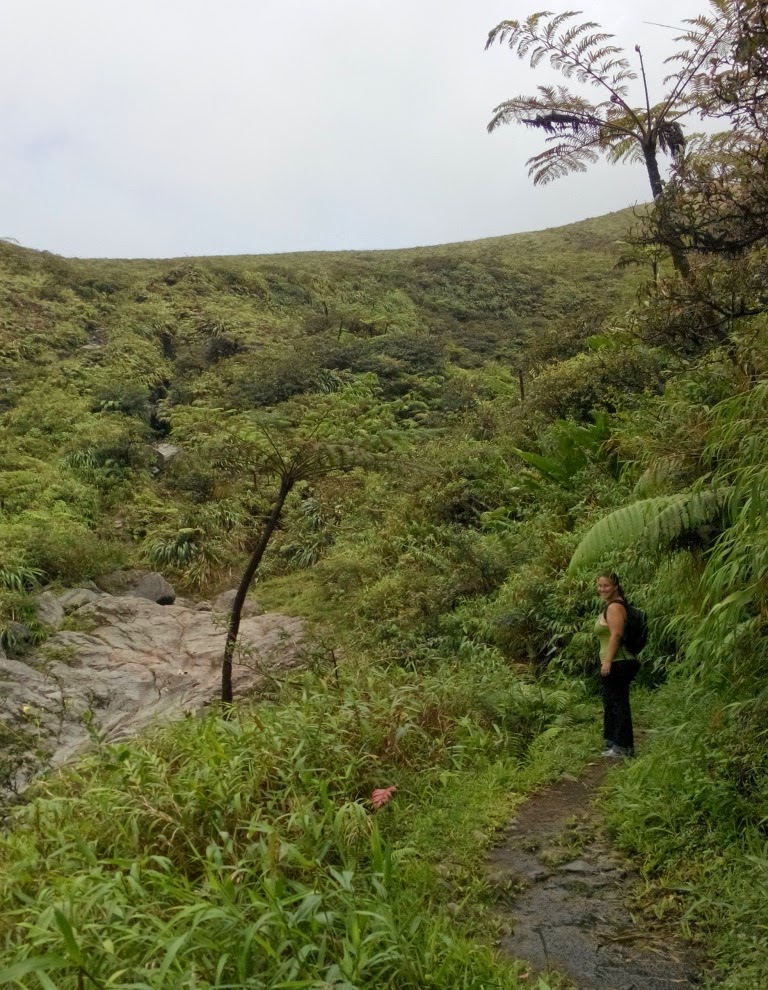 These two pictures were taken just before and upon reaching Jacob's Well. We took another little break there. I pretty much spent the whole hike up negotiating with myself. "Another 100 steps and you can take a breather." "Make it to that rock up there and you can sit down." "At Jacob's Well you get some water." And so on. Carl was helping a lot, as I said before. And he helped even more when he figured out that the best way to get me to accomplish something was through telling me I couldn't do it. A good 60 percent of the success of making it to the edge of the crater came purely from spite. 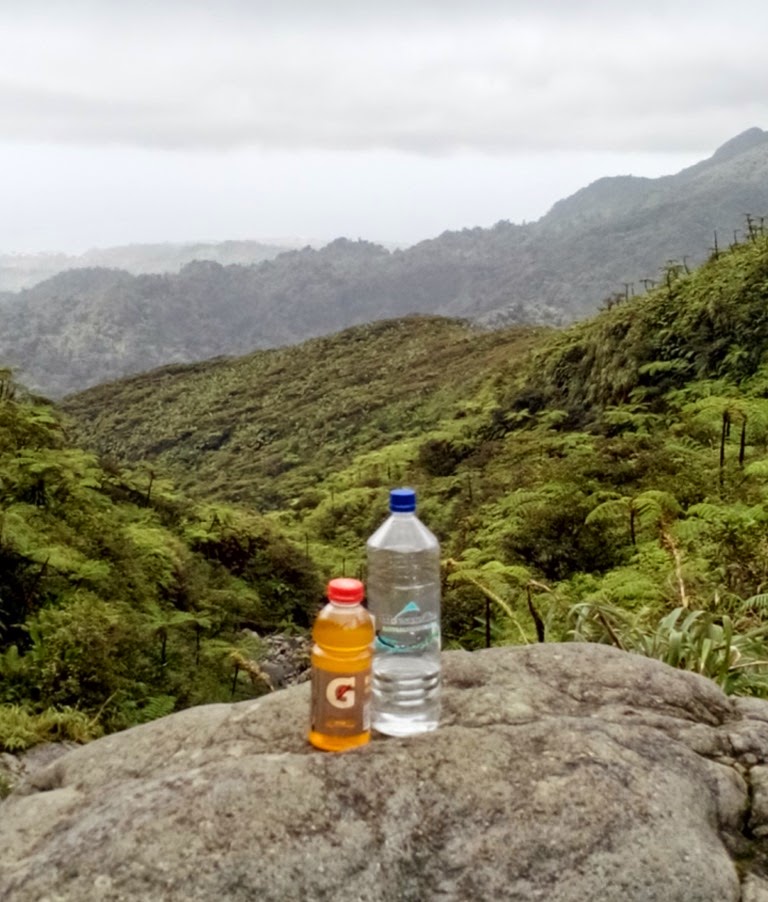 This event is brought to you by Gatorade Orange and Mountain Top Water. Also, focus fail.

And here is my favourite picture of the mountain master himself, explaining how these ravines we kept seeing on our way up had formed and what materials could be seen on the sides of the crack. Carl P, seismic nerd, DJ and brilliant imitator of the movie trailer voice. 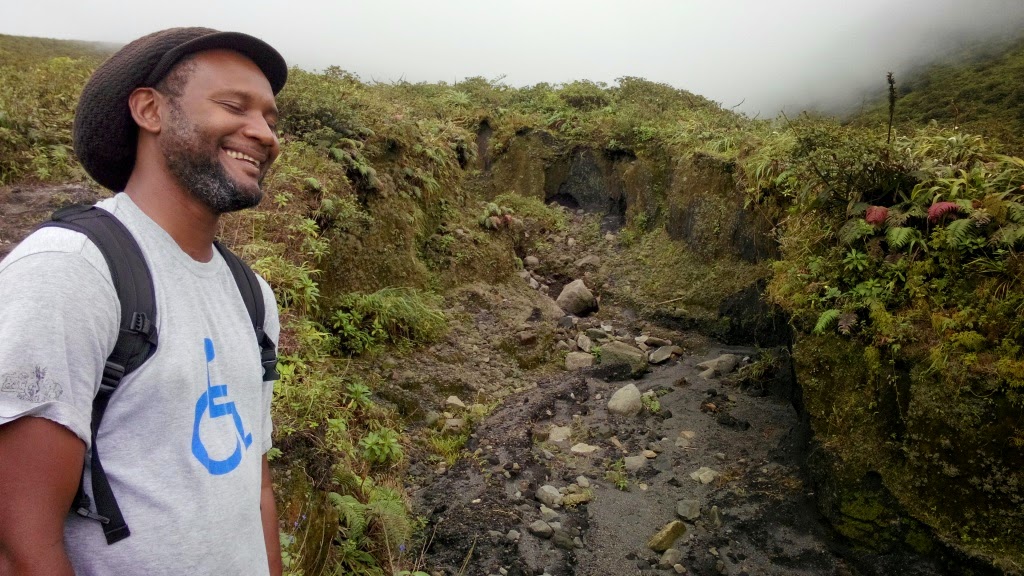 And then we reached the top! 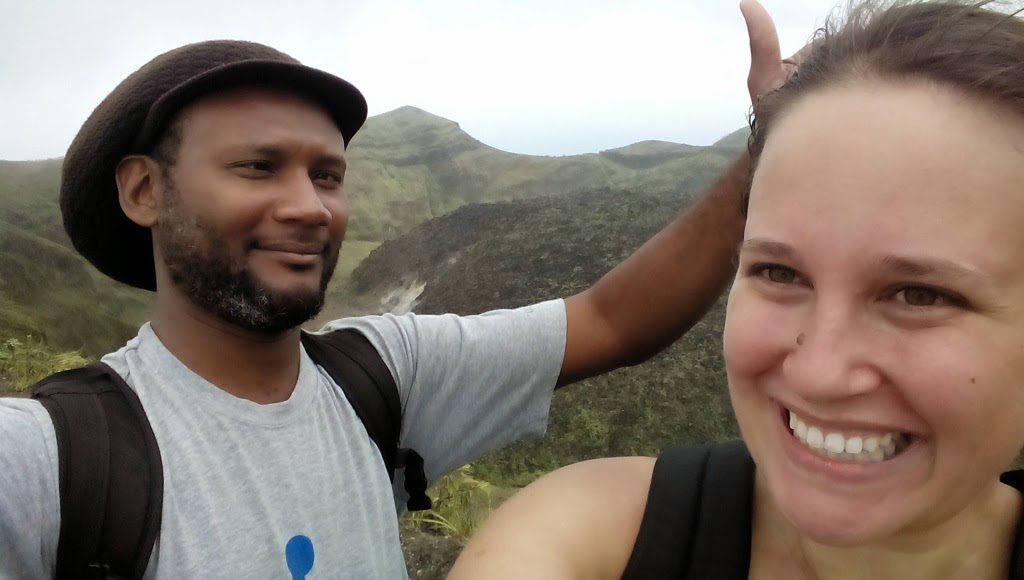 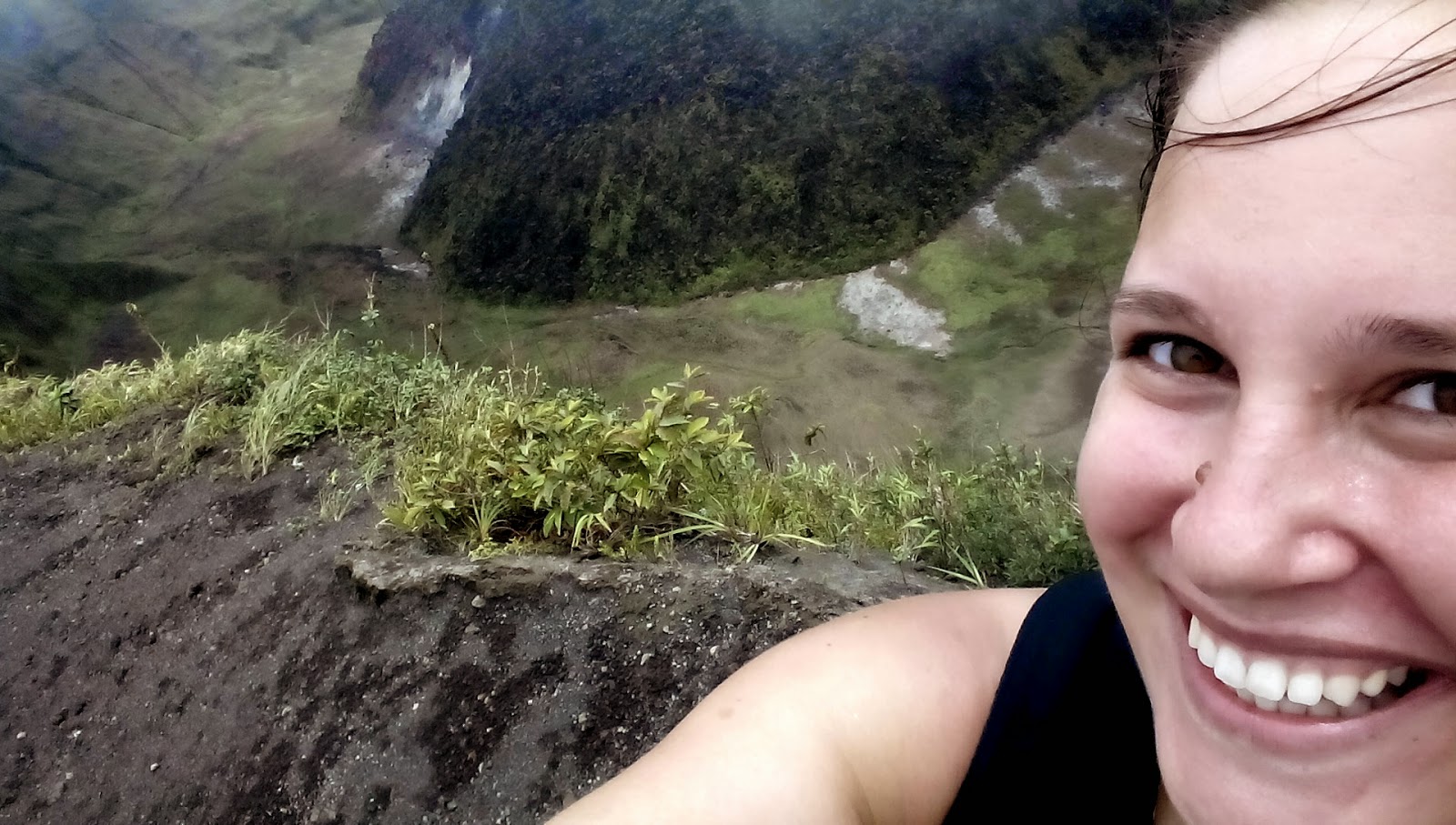 This now is the first picture I posted to Facebook and sent to my family to share my excitement about the volcano hike with everyone. Except for my grandma, she got the crochet picture, because I thought that would make her happy. (My cousin sent me an exact quote of her reaction words in an email, it worked!)

This picture has been enhanced, obviously. But not much. The most important thing has not been tampered with: it's really me and I'm really on top of the crater (and visibly exhilarated about it).

And now, just for the fun of it, my own personal favourite picture of me (just due to the fact that it really caught my essence and thus shows my real and true self) and the obligatory moustache photo - just so we can all be sure that it really is me. Because, who else would do this? 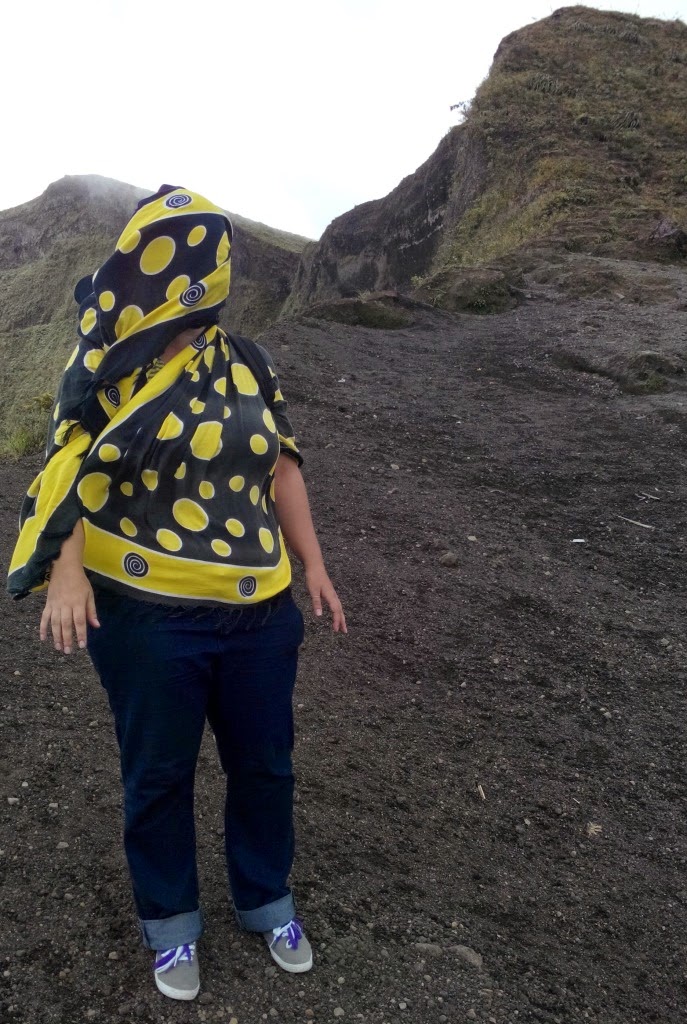 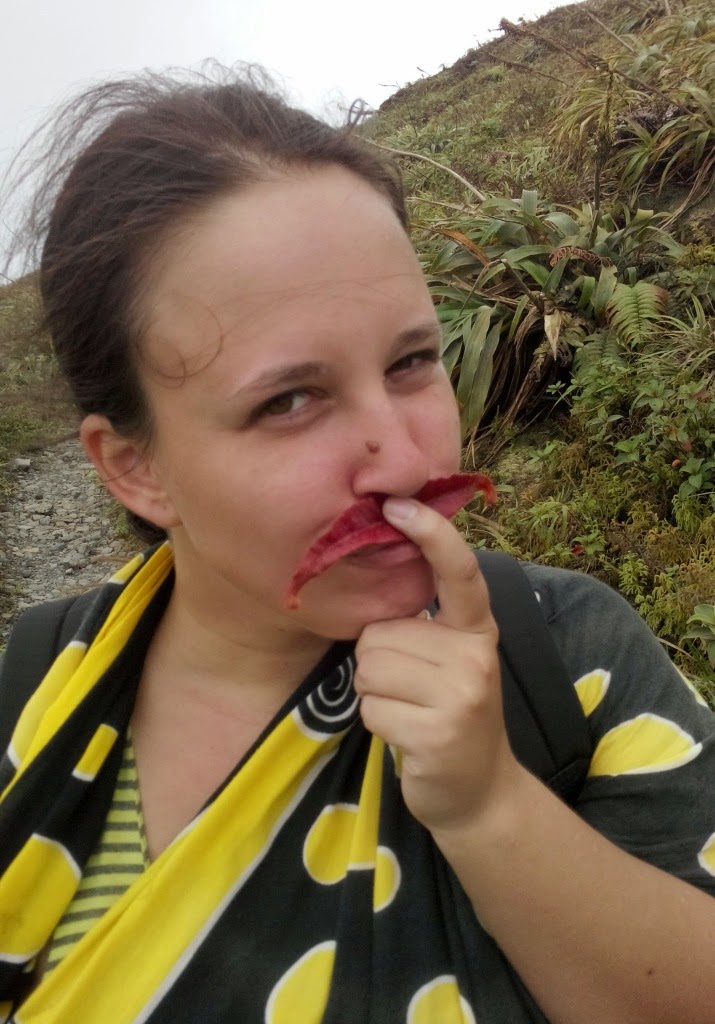 Why not end the post where it said "The End"?
Because that wasn't the whole story.

The websites will tell you that the duration of the hike up is two hours. We made it in four. The first quarter was hard because of all the steps and I thought I couldn't do it and I almost said I wanted to turn around and not try anymore. The last ten percent were hard because the adrenaline, which was put into circulation in my veins due to all the brilliant scenery around me and the fact that I was doing better, ebbed off again as we approached the finish. The weakness from the very beginning came back; at one point, I almost fell asleep on the ground. In general, I had to sit down a lot of times because the exercise exhausted me so much I got dizzy and couldn't feel my arms and legs properly, especially in the beginning and towards the end, when we were literally 10 metres from the crater's edge. I almost threw up a couple of times, because of that same dizziness (but I didn't). I cried twice (yep). I must have apologized to Carl for my weakness and slowness and for feeling bad and for getting dizzy, etc, about 150 times. Probably more. However, I do not see this as embarrassing. Not at all. I'm not a physically strong person and I never claimed I was, so, if anything, all that shirt I just told you makes my reaching the top even more impressive - and it only took me twice the time accomplished and experienced hikers need.

Do it like Carl and be proud of me.
Or at least fake it, eh.

The point of all this is: I made it, so you can make it too.
In case you weren't sure.
You'll do great.

And, given the circumstances, I'll say that I did too.


Back to all the St Vincent posts.

Posted by isaontheway at 5:26 PM