The thing is, I passed a kidney mile stone in school last week and because of that I decided it was okay to relax for a weekend instead of working right through. Therefore, for Friday afternoon, as well as all of Saturday and Sunday, my plan was to do the following: nothing.

Which of course did not happen, aside from Sunday.
No, it was so much better than simply doing nothing.
Lady Luck struck again.

Friday night I ended up spontaneously joining some new friends from UWI in a bar down the road from my apartment. Got a text saying "we're liming in a bar on your street, want to come?" and of course there was no other course of action than immediately texting back "there's a bar on my street?!" About 15 minutes later I was in said bar, chatting and laughing with the guys, which was great.

Then, on Saturday, came the real adventure: a gayap.

What in the name of Blind Io is a gayap, you ask? That's also the first thing I wanted to know when I got the invitation. Google says that a gayap is a Caribbean thing (from all the way back when the Caribs still lived in the region). A gayap is when a group of people get together to fulfill a big task - planting a field, clearing some land, building a structure, things like that. There's food for the workers, who are there voluntarily and not for pay. And, often, there's also musical accompaniment of the work, mostly drums. The rhythm makes the work easier, I guess. This particular gayap was hosted by John Stollmeyer, one of the island's permaculturists and one of those people (almost) everybody knows. An institution, if you will.

I'd seen him around a lot back when I lived in St James and still was a social being, going to parties and concerts and events... Now, I know him personally, through my supervisor, who was also the one who forwarded the invitation to the gayap to me. She ended up not going herself, because she's out of the country at the moment, but she got me in touch with John as well as some people who went and gave me a ride there and back. Thanks, P!

You're rambling again, Isabella, get to the freaking point!

John is working on restoring the canopy of trees in the hill above his house in St. Ann's, which has been destroyed by dry-season-fires over some years. One of the things necessary for planting up there is collecting water for irrigation, which is why he's going to put six tanks up there. How do you put tanks on a steep hillside? That's right, you don't. You cut a platform out of the side of the hill and then stand the tanks on even ground.

That's where we worker bees came in: we helped him with that task.

We scaled the hillside loaded with tools (to dig), buckets and bags (to clear all the broken glass from the site, there was a lot of it), fruit (to eat) and water (to drink). For three hours, we worked the hill with rakes, shovels, pickaxes and hoes to create a platform with a diameter of 20 feet for the six tanks. Of course, we didn't finish, but that wasn't the point. You can't finish a huge project like that in one day, even if there are around ten people working simultaneously. But we made huge progress and it felt great, which was the main thing. 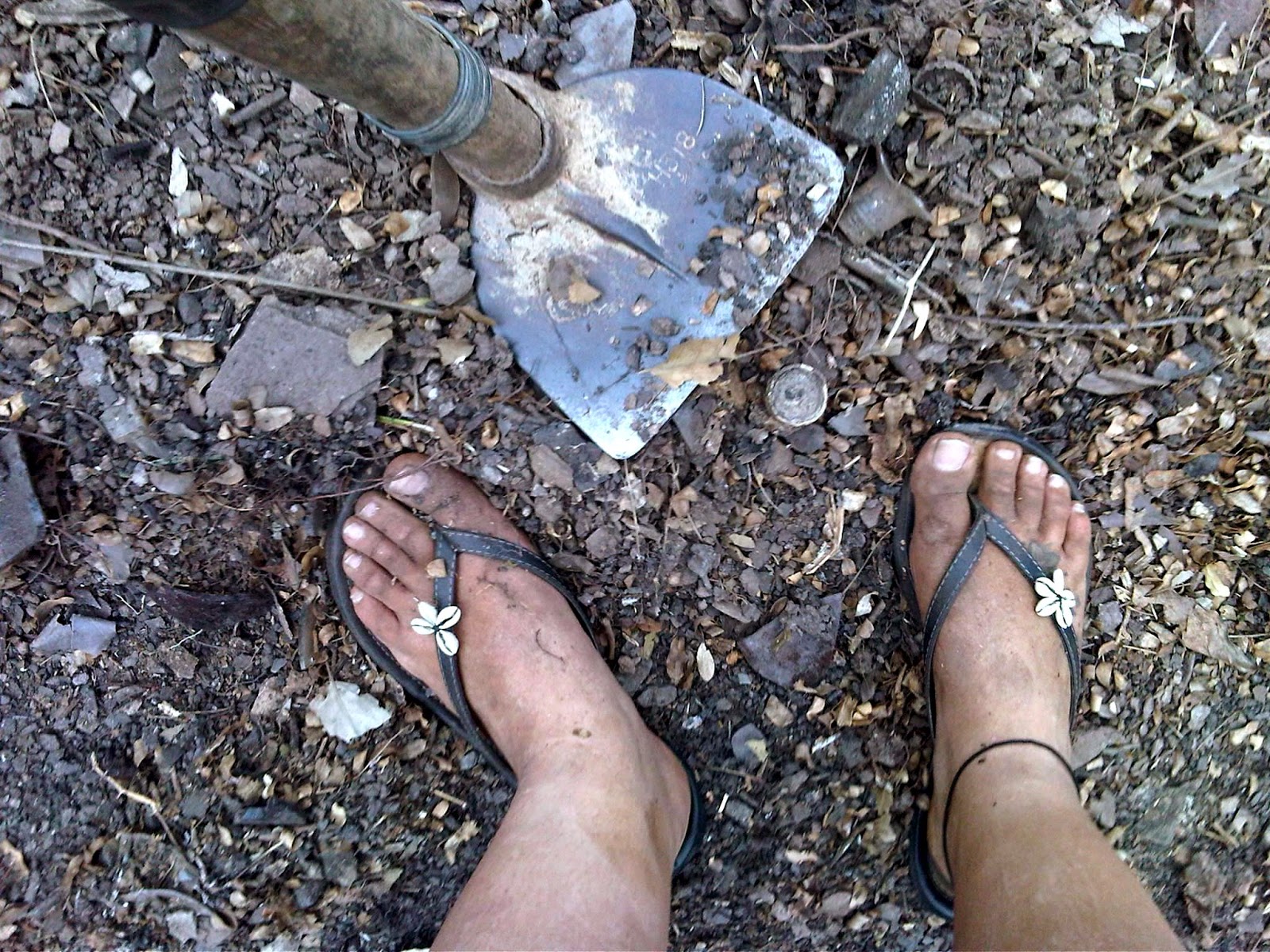 Yours truly went in flip flops. As always. I didn't work with them, though, no worries. I worked barefoot most of the time.

This is extremely special to me, for a number of reasons:

A friend asked me why I went and I told her, because I didn't want to. That's exactly it. I went there to challenge myself and move very far out of my comfort zone and deal with a bunch of things I'm more or less scared of and prove that I could do all that - it worked.

Now, I have some more pictures, but you have to forgive me for the quality, I took them with my phone. I think you can still discern what I'm trying to show, though, more or less: 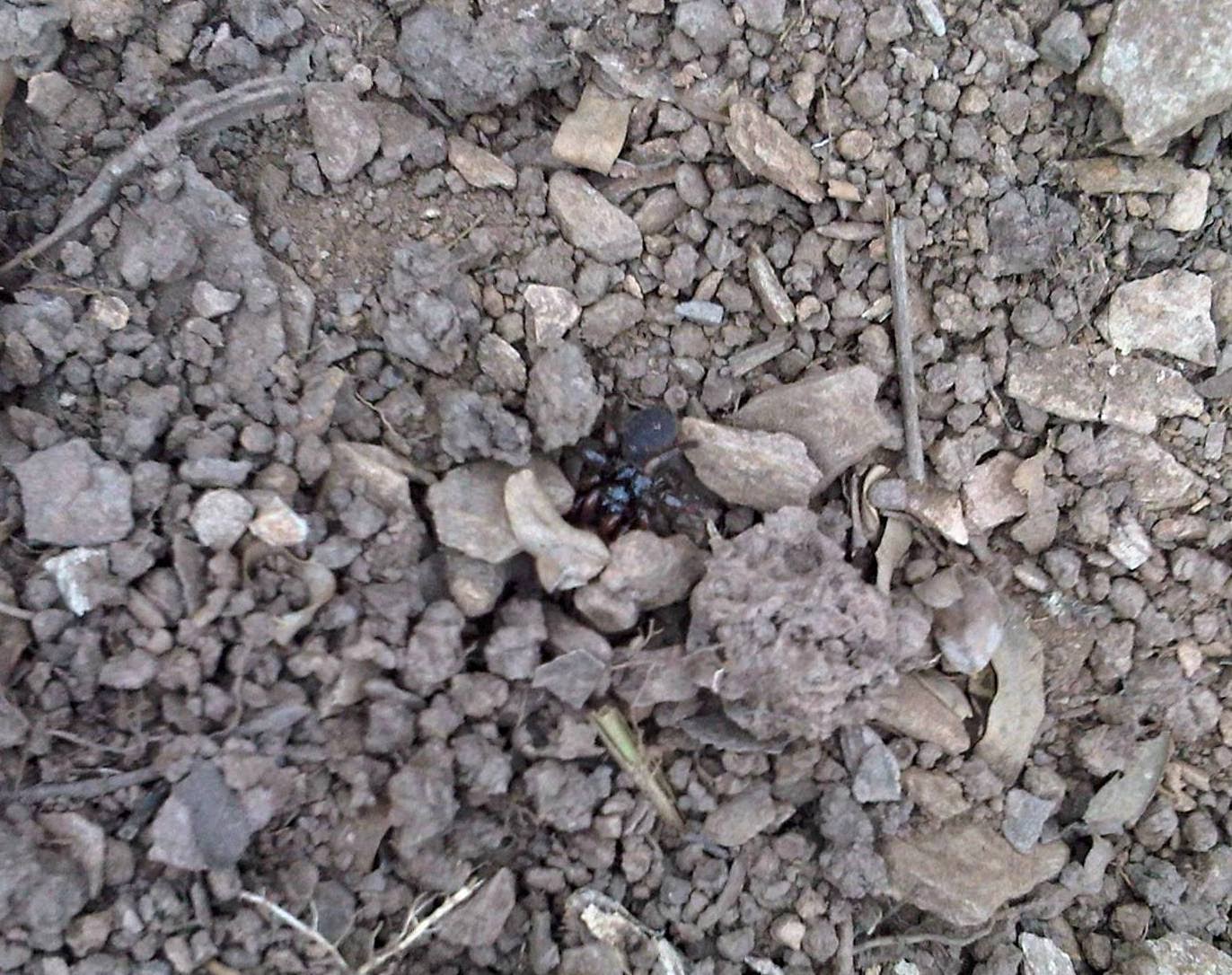 I don't even know what the hell this is, but I did not scream and I did not run. I kept working right. next. to. it! 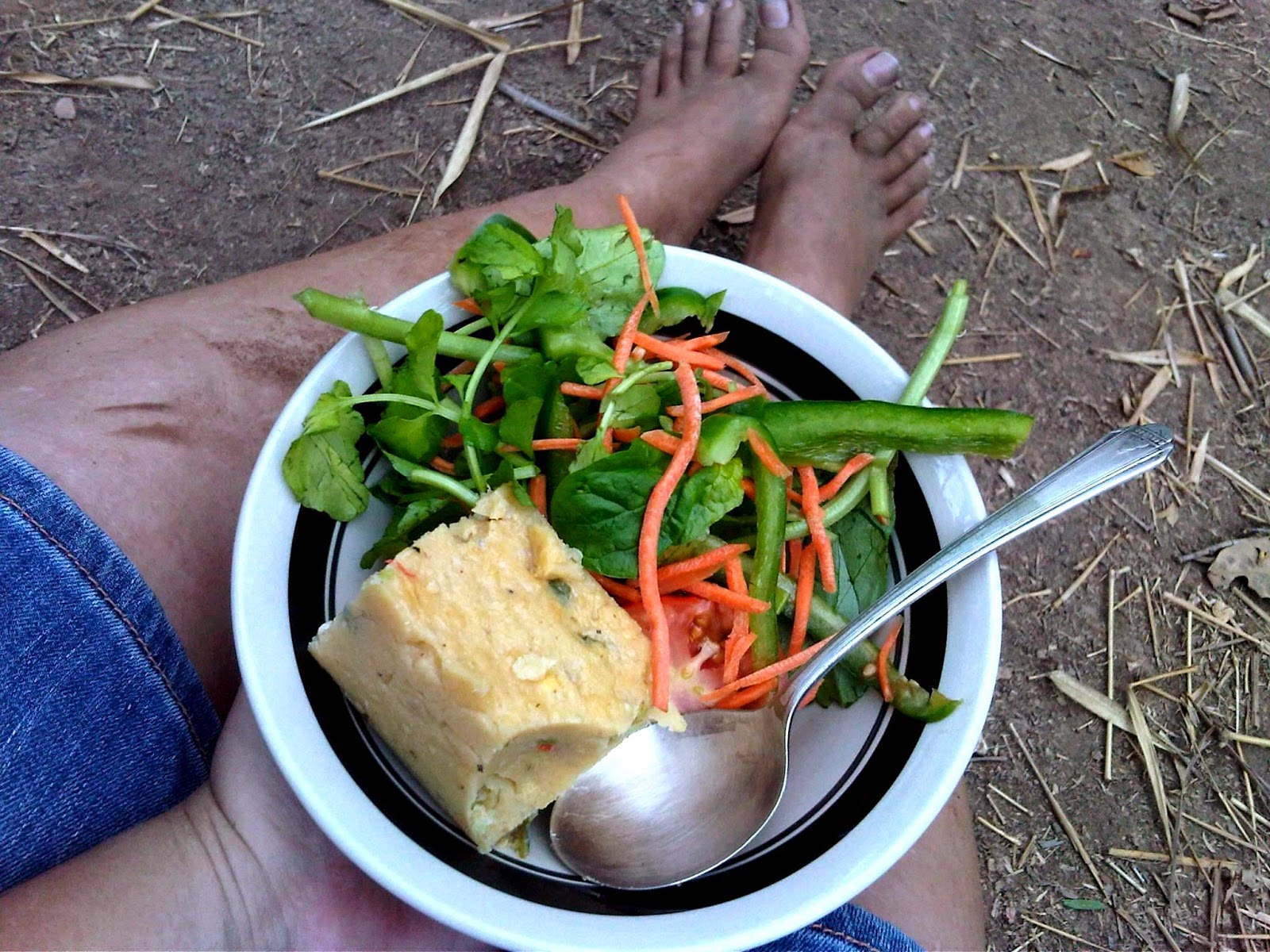 After work, we had some watermelon and then we descended halfway down the hill and had some proper dinner. Yes, I sat on the forest floor with my food, even though I knew about all the creepy crawleys that live there! Success!!

The food was extremely good (fresh salad, corn pie; and callaloo and local artisanal sausage), especially after having worked all afternoon. Yeah, I know that one afternoon is not long at all, but again - I never do this kind of thing! Richard, Annelie and Roger came by then and played some music while we ate, which was really nice. Then, before heading back home, we had a mini open forum on permaculture and the present and future of the Trinidadian, Caribbean and world society. Interesting! 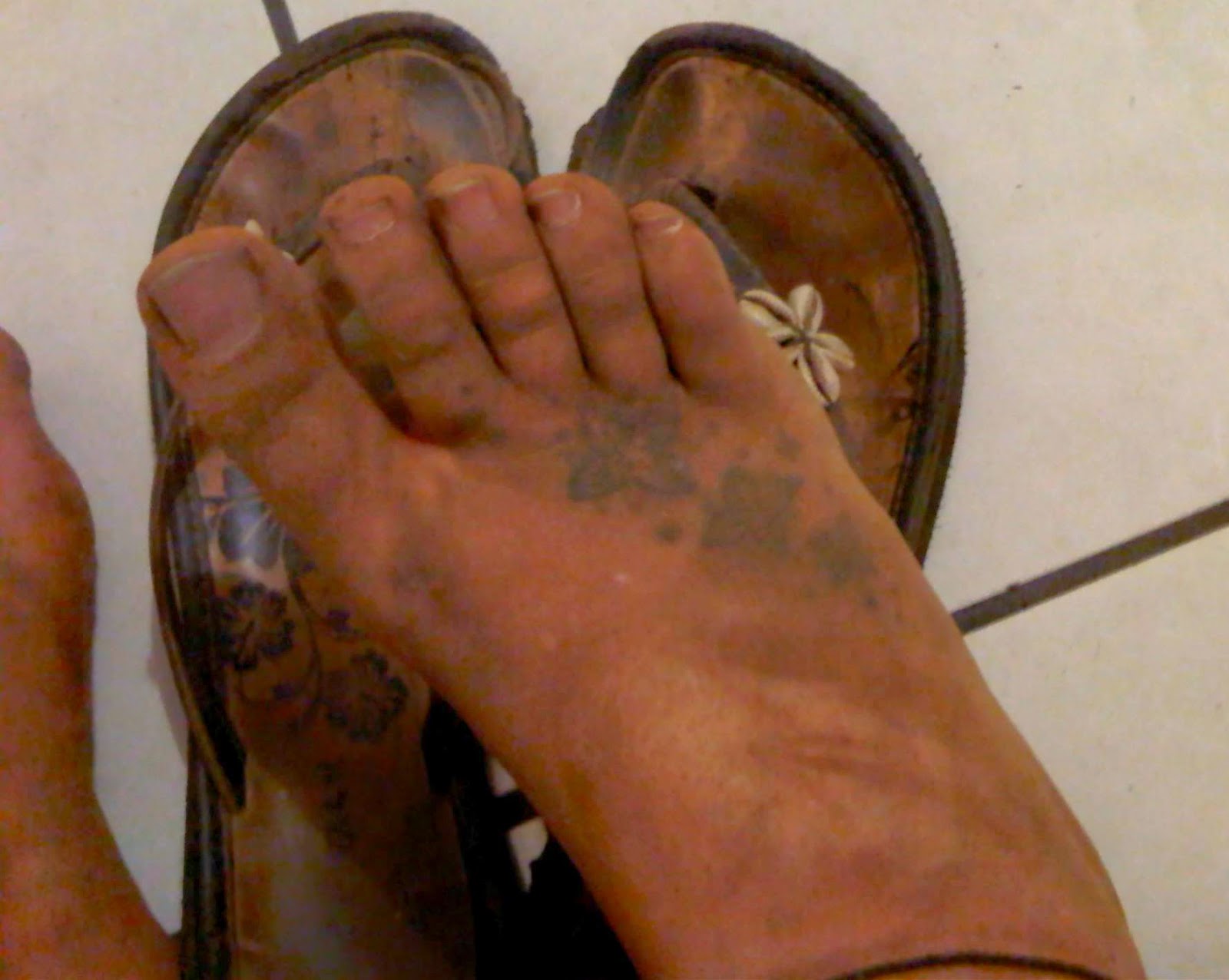 It took a load of laundry in the machine and lot of scrubbing in the shower to get my clothes, my slippers and myself clean after that day in the woods, but my tattoo is visible again, my clothes and shoes look like they did before and in general the only thing on my person that's still dusty are my lungs. Good enough.

Long blog, I know. But it was just such an awesome afternoon that Saturday. I came home feeling better than I had in months, so I want to recommend doing something like this to anybody out there who's feeling a little stressed and down due to a lot of work. Turn off the brain and get out there!

Posted by isaontheway at 1:12 PM No comments: