Austria does not have formal and official representation in every country, not even in the one where I'm living right now. We do not have an embassy in Trinidad and Tobago. I heard of there being an Honorary Consul some time ago, but I have no confirmation of this. If an Austrian citizen needs the diplomatic kind of help and assistance while here in Trinidad, as far as I know we have to go to the German embassy, or any other one that belongs to a EU country. But, again, I have no confirmation of this.

Naturally, that makes my new place the obvious choice for our agency abroad.

I mean, I'm Austrian and it's my place. So, of course, my house is the embassy now. It's the only conclusion you could possibly come to, no matter how long and hard (TWSS) you think about it.

The embassy is located in Curepe, like I said in the previous post, and right below this paragraph is the first picture ever to have been taken of the embassy's front door. No, I'm not telling you the exact address. This is the internet, are you crazy? But I can tell you that the location is prime, even though all the other embassies are a very different part of Trinidad. The capital, that is. Also, what you see here is not what the embassy will look like forever. We're just getting started with furniture and decorations and all that fun stuff, so it will all change as time passes. For the better (more colourful and alive), of course! 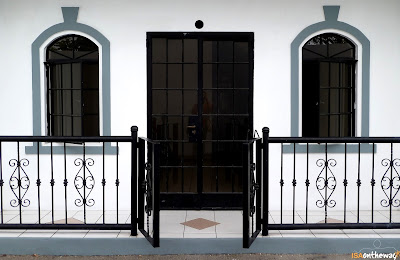 To make sure everybody knows that this is The Real Austrian Embassy and there are no confusions as to what kinds of services are actually provided (or, rather, not provided) at this wonderful establishment, a Facebook page has been created to keep followers up to date about what the embassy is and what's going on there as well as about members of staff and events that can be attended.

If it says "Liked", you're doing it right.

We are not your typical embassy and therefore, we also don't follow you typical embassy's rules. The embassy's staff, for example, is not at all what you can expect to see in any other kind of embassy anywhere. There's me, for one, I'm the King. Then there's Kwesi, he's the President. And there's Mr Frank Stickifeet, our Director of Security.

Mr Stickifeet is a baby dinosaur, wherefore he is more than qualified to be in charge of the embassy's security and the safety of all staff and visitors. He and his team are doing a great job patrolling The Real Austrian Embassy's perimeter, keeping it safe from any intruders - especially the ones with 6 or 8 legs. Because a lot of cleaning is going on at the moment and everything is filled with toxic fumes and other such fun things, their workspace is currently limited to the outside. Mr Stickifeet had come inside for a staff meeting this morning and got a little disoriented on his way back out to relay the latest information to his colleagues, so I helped him out. That's when we took these pictures for the embassy's Facebook page and Mr Stickifeet's ID. 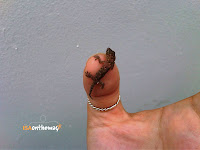 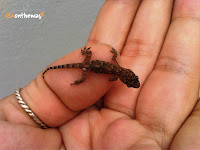 Mr Stickifeet is the newest addition to embassy staff, the team is not yet complete. We are still hiring people to fill all sorts of interesting positions, so if you are interested in getting a job at The Real Austrian Embassy, just bring in your CV and cover letter, two recommendations from previous employees, a few rolls of 3-ply toilet paper and cookies.

Posted by isaontheway at 1:53 PM 2 comments:

A new kind of journey.

I have made some changes recently. Really, those changes have been coming up for quite a while, I’ve been working towards them for months, but I couldn’t well tell you all before anything was certain, could I? Exactly, no way I could do that. So now that the new destination coordinates have been entered into the system and I have embarked on my latest voyage, I get to tell you all about it.

I have stopped traveling in the traditional sense. As in, I am no longer moving from one place to the next, always searching for new locations and sharing weird stories with you. That, however, does not mean that I am no longer on the way. Not at all. I still am and probably always will be, in a way. Only now I’m not on the way to some island or city or park. Now, I’m on the way to an academic degree and a nice, as-green-as-possible home. And some island or city or park, of course. Like I’d stop that.

Today marks the first day of my second week of studies at the University of the West Indies, which is the first real day of studies, because in week one in universities all over the world it’s all introductions and how-to’s and figuring out who’s in your class and where said class is. Now, the actual work begins. „Hi, my name is XYZ“ has been replaced by „Good evening, the topic I have prepared for you today is XYZ“. Holy fork! I really have to study now!

The other thing, the thing about the home, that’s because I don’t live in St. James anymore. The place where I lived for the longest time here in Trinidad is no longer my house, it’s my ex-house now. But we parted on amigable terms, it was all very civilizes, we’re friends now. It’s absolutely not awkward.

Wanting to spend as much time as possible studying, reading, writing and preparing for class and tutorials, I decided that the smart thing to do was to find a place closer to campus. So I looked around for a while and after tons of calls and some actual visits to potential places, I now have a home of my own. It’s located in Curepe, which is very central along the East-West corridor, right by UWI (as in half a block away) and just between the Priority Bus Route and the Highway. There are supermarkets, small shops, restaurants, doubles stands, bars,... loads of useful things in the immediate vicinity of the apartment. It’s great.

There are no pictures yet, but there will be pictures, because... you know... I take pictures of everything.

Beside those two things that now occupy the centre of my own personal universe – UWI and the Real Austrian Embassy – there’s still the exploration of this crazy place that is Trinidad and Tobago. That’s not over, not by far.

Posted by isaontheway at 4:01 PM No comments: