There's way too much food on this blog now. Or, at least, that's the impression I get when I have a look at the front page and all I see is pictures of different Trinidadian dishes and words describing them. After all, this is not a food blog, not really. That one is.

If you know the other one, though, or looked at it now, then you're aware of the fact that it's only for baking, for all sorts of sweet delicacies. So if I want to share a recipe for something other than a cake or pie - as I do now, not just information about food like in the DiscoverTrinidad series - then I have to use this blog.

In a way, this is like traveling. And with this specific recipe I'm about to share with you, we travel in space and in time. We travel to Burgenland, Austria. And we travel to my childhood.

I don't want to go into the history of the Austro-Hungarian connection, because I have no idea if you're interested in reading about this on my blog or not and I don't want to bore you more than the default level of my usual stories - if you fall asleep completely, who's going to read this? If you do want to read more here instead of searching around the interwebs, then let me know, it's something I love sharing. The one thing that's important here, that I have to mention is that said connection between Austria and Hungary is something that we see every day, here in the East of Austria, close to the border. It's palpable, it's everywhere. Even though the days of the Osztrák-Magyar Monarchia are long gone, almost one hundred years, everything surrounding us and indeed making us who we are bears witness of the times we shared: food, names, culture, language.

Again, I'm not going to go into details unless you ask me to. This is but a glimpse.

But a good one, because it's delicious!

I want to teach you how to make Grenadiermarsch, or Gránátos kocka, as it's called in Hungarian. It's a very simple dish made of very few ingredients: pasta, potatoes, onions, paprika and a little vegetable oil and salt'n'pepper. There's places where bits of bacon or sausage are added, but not in my version, I call that blasphemy! This here is the version of Grenadiermarsch that I call the one and only because, to me, that's what it is. The one my mom used to make for me, the one I make now. A taste of Burgenland, a taste of Austria, a taste of home.

Description for the less sentimental reader: a meal rich in carbohydrates (balanced by the salads on the side), completely free of meat and therefore perfect for vegetarians. And even great for vegans, once you use egg-free pasta.

Here's what you need if you want to make it for one to two people:

* Really and truly (and madly and deeply, of course) this has to be prepared with Fleckerln, a typical and traditional, Austrian type of pasta that I don't know if you can get anywhere too far from this country. But you can try. And if you can't get them, use any other type of pasta you like that's small - like ricciolini (these come closest, I believe), short fusilli or rotini, conchiglie, farfalle or orecchiette. If you're super dedicated, you can take fettuce or fettuccine and break them into little squares.

Now to the actual cooking.

This is easiest if you prepare ahead, because then the preparation of the actual dish takes very little time. If you can, boil the potato before and just leave it in the fridge until you make the Grenadiermarsch, it needs to be completely cold, so you can't just boil it right before cooking the rest of the meal. Cut it into little cubes with sides about the size of your thumbnail.

What you do boil right as you start cooking is the pasta, then you set it on the side because we won't need it again until later.

In a big pan, heat some oil and then throw in the finely chopped onion. Roast it on medium heat, we want it glassy and soft, but not brown. Once it's that way, add a tablespoon of paprika powder and stir it all, turning the onion orange-red. If this looks very sticky, add a little more oil. Now, add in the potato cubes and stir it all together, so they take the same colour of the paprika. Roast just a little to soften a bit more. This is the moment to add the salt, just make sure you don't use too much.

Last, add the pasta and just stir everything together until it's evenly orange and hot.

The ground black pepper is not, typically, added into the pan, that's something that everyone can add to their own plate, along with more salt, if they feel they need more. 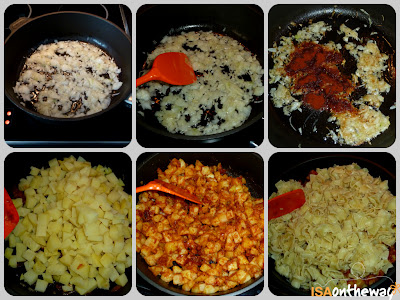 I used four big potatoes, so this fed six people.

The union of Austria and Hungary here is shown in two prominent aspects: the Fleckerln pasta is typically Austrian, while the paprika clearly marks the Hungarian influence. Look at any kind of dish that claims to be typically Hungarian and there will be at least some trace of that coindiment in it. And the Fleckerln, well they're the Austrian pasta. That's aspect number one, the combination of ingredients and tastes from the two countries into one magnificent dish. Aspect number two is the location of where it's eaten most. Burgenland, being the absolutely fascinating region that it is on the border between Austria and Hungary, also constitutes the centre of where the two cuisines collide, which is why I, being from there, grew up eating Grenadiermarsch.

Now, back to the food.

Maybe this will sound weird to you, depending on where you're from and what kind of foods you're used to, but this is supposed to be a meal on its own. It can be a side dish, but traditionally it's not. Accompany it with a generous serving of beetroot salad and cornichons and it'll be perfect. If you don't like beetroot salad or cornichons, a simple green salad will be fine as well. 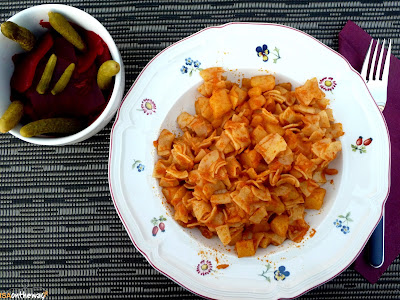 If you've made more than you need right away, here's a wonderful advantage to this food: it tastes awesome re-heated! And, here's a secret, just between you and me (as in, don't tell my mom, please): it's also really good if you don't even re-heat it and just eat it straight from the fridge the next day. 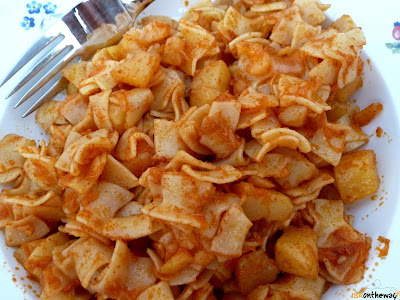 This is the kind of food that will take people through bad times, feed lots with little and can be prepared in great amounts, like for soldiers. That's where it comes from, as far as I know.

But it's also a food that gives a child strength for a long day at the playground. It's a food that builds a student back up after lots of studying and difficult exams. It's a food that brings moms and grandmas close, even if you cook it yourself because you're already a so-called grown-up in the big wide world.

It's a food that let's you close your eyes as you eat and travel thousands of kilometres to where you grew up and where your family is, no matter how far away you are.

And, again for the less sentimental ones: it's simple to make, it doesn't need much in terms of ingredients and is therefore pretty cheap, and it's for everyone (omnivores, vegetarians, vegans,... man, if you use the right kind of pasta, you can even make this gluten-free!).

Posted by isaontheway at 7:48 AM