Next up, STREET FOOD: DOUBLES AND PIES

Unless you’re a Trini or have been to Trinidad, you’re probably a little confused right now and wondering if I’m just saying random words at you to mess with your head. No. I wouldn’t do that to you. Doubles are sold on lots and lots of street corners in the morning and at night. You won’t find them at lunchtime or in the afternoon, or at least you shouldn’t. I was told that if you find a doubles man in the afternoon then his doubles are probably already cold and not very good (which is why he still has some left to sell that late). That goes for all the doubles vendors in the North, at least, I’m not sure about Central and South, because I’ve had very good doubles there in the afternoon as well. I guess they get them from a different source.

They’re breakfast food. And drunk food. The same goes for pies. Those are also sold on street corners, by the same guys who sell the doubles: alloo pie (potato), baigan pie (eggplant), etc. There are lots of varieties and they take lots of different forms, but they have one thing in common: They are so incredibly bad for you! But you’ll still eat them. 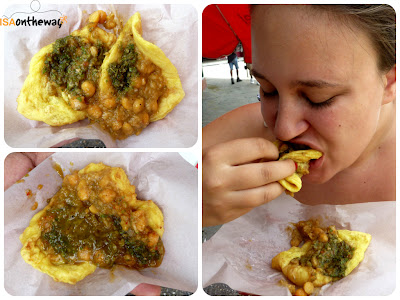 The top doubles has channa and chadon beni, the bottom one has those two and mango sauce. Both are with pepper. The pie is alloo (potato) and is filled with channa, chadon beni and slight pepper.

Doubles are little, deep-fried pieces of fluffy let’s-call-it-bread-because-I-don’t-know-what-else-to-call-it made from white flour and chickpeas. They’re topped with channa, chadon beni, mango sauce and sometimes other condiments. And pepper. It’s very hard to explain to you how best to eat them, but I always tell people to see it as a game. You get points for everything you actually eat, minus points for what lands on the ground or on yourself and you win if more than 50% actually ends up inside of you. Pies are usually easier to eat, but it’s also a very messy affair. It’s all greasy, flavourful and – depending on how much pepper you asked to get – it’ll set fire to your insides. For beginners, I recommend ‚no pepper‘, you might get some looks for that, but don’t worry about that, it’s your body and your health, after all. If you like hot and spicy food, but you’re not sure how much you can handle, ask for ‚slight pepper‘. That’s my standard order, because even though I love hot pepper, I don’t want to injure myself. If you’re really hard-core or you’re sick and nothing has been able to clean your sinuses, go for ‚heavy pepper‘. But, really, don’t. I saw a big man eat a doubles with heavy pepper three days ago and I saw him sweat and cry. Really, just don’t.

All that grease and (possibly) hot sauce are what make doubles (and pies) the perfect night food.

You were at Shaker’s or at Frankie’s (or anywhere else on the Avenue), drinking with your friends and arguing heatedly about whether or not the Prime Minister is doing a good job and what’s going to happen to the Trinidadian arts and music scene over the next years if the rewards system doesn’t change. You sang along falsely to a lot of the songs you heard (they’re all your “faaaaaaavourite“ that night) and even got up to dance like nobody’s watching two or three times, now you’re hungry. So you stumble out of the bar, onto the street and you see a small congregation of equally wobbly people on the next corner. Hallelujah! You can barely make it there and you can barely count out the eight dollars you’ll need for your two doubles, but you just so manage to get there and then you order your doubles, one you just stuff straight into your mouth and the other is hovering in front of you in the hand of the vendor (who knows that you need that kind of assistance, he sees this all the time and he won’t judge you). As soon as the last bite of the second one is swallowed (because the second one you don’t wolf down, that one you actually chew), you feel better. The world isn’t spinning anymore, you’re feet are really and for sure touching the ground again and you know that you’ll make it home and into your bed without any incidents. Unless you go back to Shaker’s or Frankie’s (or anywhere else on the Avenue), that is.

This explains why they’re good for the post-lime hunger, but I said they were also good as a breakfast food. And it’s true. When you’re out to get a taxi or a maxi to go to university or work, a doubles or two (or even more if you’re that hungry) is the perfect option. Various food groups combined in a small meal, handy (kind of) and cheap at only four dollar a piece – it’s great. And the best thing about them is that they’re for everyone, because doubles as well as pies are vegetarian!

My go-to doubles vendor on the Avenue (Ariapita in Woodbrook, that is) is the one on the corner of Cornelio and Avenue. The main reason for that is that he’s right by Shaker’s, which is on the opposite side of Cornelio, on that same corner. But he’s also very good, so that’s another plus. In Saint James, there’s a very good one that usually sets up his stand right in front of the Standard on Western Main Road. And there’s another good one a few blocks further towards town, on the corner with Benares, I think, or Agra. If you’re in Chaguanas, the little doubles stand in the far right corner of the market is very good, but that’s for during the day, while the market is open.

Pies, as previously mentioned are usually sold at the same place where you get doubles, at least in the morning, not sure about the middle of the night. And then you will get people walking the streets or squares of Port of Spain yelling „hot pies“, but beware. Those are different kinds of pies, pastry pockets filled with meat, cheese, potato or even sausage – not like the ones I described above.

Next time you’re out early and haven’t had breakfast yet, or you feel for a little snack or you want to prevent a bad hangover after a night out on the town, think of me and get some doubles! You can thank me later.

And if you’ve tried doubles, but they’re just too hard to eat, you have a whole range of other options for street food: the Middle East is very present in Trinidad nowadays, because of the Syrian and Lebanese (and other, but mainly those) immigrants. What does that mean? Gyros, gyros, gyros!