Being back in Austria has been really interesting so far. Not that there's anything new that I didn't know from before, but I'm re-adjusting and re-learning it all.

It's the small things that get you, you know? I went to the supermarket on Wednesday morning and was feeling a little weird on the way there, like I was doing something wrong. Because I didn't have any euros, I had to pass by an ATM on the way and take out some money, but I couldn't for the life of me think how much would be a good amount. Arriving at the supermarket I realized why I'd been feeling a little weird - because my hands had been empty. I used to always go shopping with a basket or a bag of my own so as not to have to get any plastic bags, but I never did that in Trinidad and so I forgot. And the money question also dissolved itself into a moment of realization and a quick thought of "Oh gods, I'm such a dork!", because I never, ever used to take out money to go shopping. I never brought cash to a supermarket, just paying for everything with my card. Remembered that too late.

But all the memories are coming back now, the machine is re-adjusting itself, re-wiring the bits and re-configuring the software to go from OS-Trinidad back to OS-Austria.

One of the first things I did that same day was to do some laundry. I didn't have much so I got to throw in my bag that I hadn't washed before, mainly because I was scared it would break. I'd made it myself, after all, with no previous experience in bag-making. Now you can surely imagine how surprised - shocked, almost - I was to see that it came out perfect! 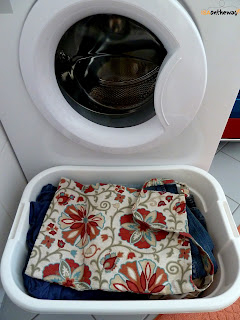 I know you're not supposed to feel proud of yourself, but I admit that I do. I'm proud that this thing that I made myself without any experience whatsoever is still in perfect condition. No matter what I put in there and how heavy and stuffed it was, it held. No matter if I used it in the blazing sun or in the rain, it held. And now I washed it in the machine and then hung it out to dry and it's still holding! And all I can think is "wow, I made this" and I'm just baffled. Success and celebration!

Wednesday evening took me to a different part of Vienna, where I visited some friends at their house. That included a great surprise for another friend of mine: Leo from Cali, Colombia! He's in Vienna at the moment for a course he's doing to better his career options and staying with my two friends who graciously agreed to host him for his three visits to Austria when I asked if anybody had some space for him a few months ago. A big bunch of awesome and lovely people, all of them. We had some dinner with more people and then all went to the beach.

But, how? Austria is a landlocked country!

Yes, but Austrians are very resourceful people and we make things happen even where others couldn't. So we might not have any access to the sea, but we still have beaches. One of them is called Sand in the City, a place where in the winter we skate on ice and that's filled with sand and little cocktail bars and lots of chairs and tables in the summer. We had wine and beer and cocktails (well, each had one of those things, we didn't all have everything) and enjoyed the sand between our toes for a while. Then it was time to head home, because it was late and - almost didn't remember that either - the metro does not run all night during the week!

Thursday took me to a next beach, kind of. A natural one; no sand, just grass. But unlike the fake beach at Sand in the City, this one actually was by the water. You know that the Danube flows through Vienna, right? We have the Old Danube and the New Danube and just off the old one there's a little body of water called Kaiserwasser where some friends of mine went to swim in the water and chill on the grass. After I got all my chores and errands done for the day, I joined them there.

Kaiserwasser is right by the so called UNO City, where the UN has its seat in Vienna.

It was supposed to be the hottest day of the year so far, with temperatures of up to 38°C, but they didn't rise all that high in Vienna. We only reached 35°C, or maybe 36°C. Still, it was very hot. Therefore, a little space in the trees' shade for our things and our towels - and by extension ourselves - was very much appreciated. Then my friend Josef and I just spent about two hours chatting about the year gone past since last we met, what had happened and what was new and joining the others for a swim in the cool water.

After, instead of going straight home to take a shower and wash nature off my skin (euphemism, meaning bits of flowers and trees, algae, earth and dog hairs - blegh), I packed up my things and went downtown. When I say downtown, I mean the first district. In this case, specifically, Stephansplatz.

There, I met a next friend of mine, Jakob. We went to have ice cream at one of the favourite places of the Viennese: Zanoni. It's located on Rotenturmstraße, right between Stephansplatz and Schwedenplatz, between the centre of downtown and the Donaukanal river, which forms the border between the first and the second district.

It was there that I realized that even though I'd been gone for a while and had many things to remember and re-learn, there was also a lot of Vienna left inside of me. Walking to places without looking around much, doing or saying certain things without having to think about them before, just knowing. That was a relief, because it means that, yes, I really am still at home here.

I might still make mistakes, like thinking I could go shopping whenever and being completely thrown off when told that the supermarkets all close around 7 or 7.30PM, or even almost holding my hand out and giving a little wave at the bus driver when I see the bus pull up to the stop (Pulled my hand back at the last second, that would have been embarrassing!). But I'm getting there and the truth is that I really already am there with one foot.

All is well, Austria is welcoming me back and it's good to be here again.

Posted by isaontheway at 6:19 AM