This one is especially for all you vegetarians and vegans, I’m convinced you’ll love it. You can have this with meat, of course, but this is the vegetarian food, so that’s the aspect I’ll focus on.

The term ‘roti‘ really refers to the pancake/crepe-like, bread-like thing that accompanies various curried or stewed vegetables and legumes. It’s big, thin and there are three versions of it (that I know of). Dhalpourie is large, round and it consists of two layers, with ground dhal (split peas) in between them. It’s very yummy and my personal favourite. Uncommon Caribbean has a nice and very heart-warming article on how it’s made. Buss up shut is the next version of roti, it’s pretty much the same as dhalpourie but without the ground dhal in the middle. It’s also very good, but I find it’s heavier than dhalpourie, maybe because it’s a little thicker and it's also made with more fat, so it's greasier. The last one I know about is sada roti, which is often eaten for breakfast. I believe it’s smaller in diameter than the other two and it’s dryer, but I’m not sure [This has now been confirmed and it's dryer because it's the one with the least fat in it - but when it's well made it's fluffy, so now you know!]. I haven’t had that one myself, but it must be really good. I know a guy who once said he wouldn’t marry a girl unless she knew how to make sada roti (and not just make it, it would have to be good too, of course).

There’s a whole variety of what you can eat with your roti: Channa, a thick and creamy chickpea concoction with pieces of potato, almost like a very, very thick soup. Bodi, that’s green beans cut into small pieces. Pumpkin, which tastes somewhat sweet and is one of my personal favourites. Lentils, mango amchar, chatigne, bhagi callaloo, fry alloo and many other things. Really, there’s a wide variety.

And for the meat lovers out there, you don’t have to go all vegetarian, because there’s also the option of adding curried or stewed meat to it, like goat, chicken, duck or sometimes even shrimp. What you have to keep in mind here, though, is that the meat is not – I repeat, NOT – boneless. Unless you ask for boneless and pay extra, usually you will have to pick bones and sinews and all that fun stuff out of your food, and that’s assuming that the „boneless, please“ option is available at all. Kinda makes you rethink the whole eat meat idea, right? 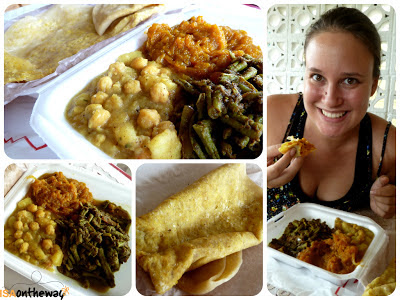 My last roti lunch before I left Trinidad, dhalpourie with channa, pumpkin and bodi.

As for the way to eat this, it is definitely easier than with doubles, for example. That’s because here you have options, which, with doubles, you don’t. If you get roti, you can choose between three ways of enjoying it.

You can get your roti in a box or on a plate, according to where you’re eating and if it’s for take-away or not. This means that you get all the fillings onto the plate or into the box and then you get the roti on the side. You then tear pieces off the thing and use said pieces as your cutlery. Yes, you eat with your bare hands. It’s a little messy, but I have yet to find a restaurant that sells roti that doesn’t have a sink right there for you to wash your hands when you’re done (really, right there, not even behind a door or anything). So you don’t have to worry about getting your hands clean again after you finish your meal. And let’s be honest, when you eat with your hands, food tastes just so much better. It’s the primal instincts that are awoken in the process, I guess.

You can get your roti in a wrap. That means you choose what kind of fillings you want and then you get those wrapped in the roti and can eat it like a big sandwich that you have to be super careful with, because it could fall apart at any moment, like a woman with hysterical tendencies that’s been under a lot of stress lately. This option is pretty handy when you want to eat your roti on the go, because with this you can kind of walk and eat at the same time. Don’t do that, though, it’s not good for you. And the activity would distract you from how good your food is, we don’t want that.

Last and definitely not recommended at all option: you can be uber-civilized and get your roti (open or in a wrap) with a knife and fork. Then you can carefully dissect it all and make sure you don’t get any sauce or grease on your fingers and you won’t have to wash your hands or your face after. But you’ll be on your own with that one, I’ll pretend I don’t know you.

There are hundreds of roti shops all over Trinidad and you also get roti in other places in the Caribbean; I’ve had it in Suriname and in Grenada, for example. It’s very wide spread. I’ll still recommend one place to you because it’s one of my favourites in Trinidad and it’s great when you’re out exploring the island and you want to stop for roti on the way from North to South or from South to North. Very close to Freeport, right on the Solomon Hochoy Highway, there’s the Hi-Way Roti Shop. It’s easy to spot from the highway and not too complicated to get to (you can’t stop right on the road, of course, you have to exit and drive there from the other side) and it’s very good. Their dhalpourie with goat is said to be extremely good, my personal favourite there is the vegetarian, because they almost always have pumpkin.

Pepper, of course, is important when eating roti – well, it’s important with almost every kind of food you’ll get in Trinidad. If you get it in a wrap, ask for the amount of pepper you want to put right inside. If you get it open, there’s usually pepper sauce you can put on your plate so you can dip your food in bite by bite. If you order with knife and for, you can ignore this paragraph, because you probably can’t handly pepper anyways.

Sorry, but silverware is for sissies. I’m strict on that one.

Posted by isaontheway at 3:22 PM