I am going to take my upcoming return to Austria as an opportunity to look back on all the places I've visited, people I've met and things I've seen and learned in the last -almost- year. Not for the first time, of course, I do spend an awful lot of time reflecting, revisiting and reliving. But I want to give you the chance to do it with me, if you would like to. Or maybe I'm just looking for an excuse to put all the blog posts I've written in the last three hundred and thirty four days into one single big list - just to see how cool it looks.

The following is a picture I posted to FB last July to show where I was planning on going and to ask people to plan an intervention or otherwise help me, because I felt the booking of one-way tickets to one place after the other was becoming an addiction-like problem. Nobody did organise an intervention for me, though. Luckily, the problem solved itself when I noticed that I still loved Trinidad as much as I had the first time I visited and decided I was going to stay, only moving between here and Colombia instead of all over the freaking Caribbean. 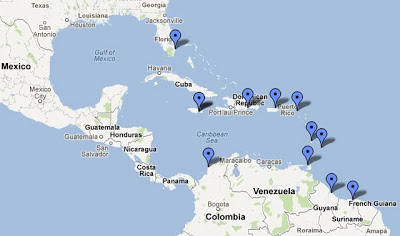 There's places missing here, but it's still quite the map, I find.

Here are all the stories from my first completely free, not-for-university and for the most part overwhelmingly random trip around the Caribbean and North/South America.

Austria: The day before I left Austria, July 10th, was the day this whole story started, when I told you that I was up to something and what that something was.

Puerto Rico: That island is still as special to me as I described it back when I was actually there. Almost a year later and I really can't believe how much time has passed, I feel like I was just there. There was the craziest arrival of all times that almost made me want to cancel my whole huge trip the very same day it started, and the rewarding beauty of the old town, that made up for it all. Just a few days ago I got to chat on Skype with a friend I made there, who I went to the beach with, and on that awesome city tour. And the other beach, because you can never have enough of that! And I remember my friend Abdiel, wishing I could go visit him at the café and order a Metaphor to drink while I write this. Just yesterday I talked to my friend Ricardo in Panamá about the greeting I sent him from La Perla, and last week I was reminded of my highly embarrassing episode on that boat that I thought I'd fall off of. And I have to admit, it would be the same all over again if the situation repeated itself. Yes, Puerto Rico was special. Wonderful beginning to a wonderful traveling experience - and I'd go back in a heartbeat, to see the place again!

Dominican Republic: The second country I visited, unfortunately, wasn't as spectacular to me as the first. I believe it was just a question of timing, though. And, who knows, maybe I'll get a chance to go back and confirm that. One of my favourite people just moved to DR, so maybe I'll get the opportunity to visit the country again and with it the chance to hang out with two of the nicest CouchSurfing hosts I've ever had: Luis and Liza.

USA: One of many stopovers in the States during the trip, because Miami is where all the planes touch down when you want to see everything but book it all randomly. I had quite an interesting time there, too. That includes burning flags into my skin, getting stranded in Plantation, having super dangerous encounters with fearsome sea creatures while meeting Colombian friends on the beach, cruising around Broward county in a hot ride, going on diplomatic missions and leaving Florida for the very first time. As in, going to a place in the US that is not Miami or Fort Lauderdale for the first time since I've first come through, because back then I had to switch planes in New York, although everybody tells me that doesn't count as a visit. Therefore, very first time ever. The first place I went was New Jersey, where I hit up sandwich joints instead of casinos in Atlantic City, strolled along the ocean and met one of the most helpful strangers ever.

The reason I had left Florida in the first place was not, however, to play old person (yeah, right, "play"...) and spend some time in Atlantic City, but to visit my friend Louizis in Philadelphia. So the next stop was Pennsylvania, where I not only ate tons of cream cheese, but also followed in the footsteps of Rocky (literally) and went back in time to the beginnings of the history of the United States. Before I went back to Atlantic City in order to go back to Fort Lauderdale, I also got to spend a fantastic day in New York City with my friend Mari, the Colombian from the beach. This one does count as a real visit. It may only have been one day, but we had food enough for a whole family and visited more museums that others visit in a week. Yep, definitely counted.

Upon my return to Florida, I had gross bubble tea and turned this site from isaontheway.blogspot.com to isaontheway.com - YAY MILESTONE!!

Next up was a trip to Key West with another new friend - you really get to make many of those on the road, it's wonderful. I saw a lot more than I had the first time I visited the place and got to spend the night on a Navy Base, which was exciting. Not as exciting, however, as all the lobster we ate.

SINT MAARTEN: On August 11th the time in the US ended and I went back on the real road, back into the wild. By that I mean, I went to Sint Maarten, yet another beautiful little Caribbean island and another new place for me. That place was incredible, freaking out of this world! Nothing more to say.

SURINAME: After that brief yet phenomenal intermezzo in the island world, I went back to mainland America, South this time, not North. I went to Suriname, where I joined a group of students from Germany and Austria on a mission to understand the history of maroonage in the places where Amazon meets Caribbean, which was really interesting - in many different ways. One of those ways has to do with cocaine, you should really read that story, it totally keeps what the title promises, totally, for sure, yeah.

GUYANA: The next country on the school trip's itinerary was Guyana, probably the most intriguing place I've ever gone to, simply because it's a country we know next to nothing about and that is unique in so many ways, it's hard to describe all of them. But try I did. There are crazy animals, there is gold everywhere, towns like you know them from the Wild Wild West, the widest rivers I have ever seen anywhere (because I haven't been to Brazil), and the world's best rum. I usually travel on my own and I believe that I am comparatively good at it, but Guyana is one of the places I don't believe I would have gone on my own. Because of all the unknowns, because it's a crazy place. So I'm grateful I got to join the university excursion even though I'd already graduated; Guyana is a surreal place and I'm happy I got to see it.

TRINIDAD: Yes, finally, Trinidad. Finally! After all the waiting I finally got to eat sharks in Maracas again, party again with the people I had met the year before, re-visit all the places I still remembered so well and properly experience the nightlife, because this time around there was no state of emergency and therefore no curfew. Unfortunately, this visit was very short, because I left to keep island-hopping right after the student trip ended on September 2nd. But worry not, you already know I went back because I'm here in Trinidad as I write this.

Wow, time really does fly. As I said in the beginning, I can't believe it's been almost a year. All these things I'm writing about, they feel so recent! Yet they happened oh so many months ago. It feels good to go back and activate the memory databases with you, I hope you're having as much fun here as I am, re-reading and re-living.

But it's a lot of information in one go, right? Don't worry, I'm a little hungry now and a little tired, so I will take some time to eat a light dinner and watch some TV before coming back to continue this recap. Later, hopefully. Tomorrow, maybe. You should do the same, you know, because I know for a fact that you've been glued to your computer screen ever since I posted this and would never go away and do anything but read my posts unless I gave you expressed permission. You're awesome. So you get to take a break with me now. You're welcome.

Don't change the channel, folks. We'll be right back with more fun after this short commercial break!

Posted by isaontheway at 5:44 PM