Here's the explanation you've been waiting for. How did a Colombian end up in Hell? This post will unravel the mystery. Although, maybe, it'll just open up even more questions than we all started out with... who knows?

Leo is in Austria to do a course at the FH Technikum Wien so he can be the best and the smartest and the most well-informed of all in his field of work. While in Vienna, he's staying with two very good friends of mine, Iris and Wolfgang, who agreed to host him in their apartment. But I told you this before, so I'm not going to tell you again. Well, technically I already did a second ago. Shut up. Just keep reading!

Iris and Wolfgang are going to Peru on Monday to travel around for a while, her for the umpteenth time, him for the first. I'm excited for them because I'm sure they're going to have a wonderful few weeks there, but I'm also a little sad because I just got back and now they're already leaving so we didn't get to do much together. Leo is leaving as well, but we'll still have next weekend, so that's not so bad.

Still, to make the most of the time that we're all in the same country at the same moment, I invited them to come visit me in Illmitz while I was there. It's an immensely beautiful place; all of Burgenland is wonderful, but my Seewinkel (the area where my two villages are) is especially precious. The weather forecast had promised sunshine, high temperatures, a light breeze and no rain until the evening for Saturday, so I proposed they drive down to meet me at my grandma's house, from where we could go to the lakeside to enjoy the weather and swim in what's often called "the sea of the Viennese" ("das Meer der Wiener").

To get Leo on board I said we could make it into a paseo de olla and he picked up on the idea and actually made it possible by cooking for all of us!

A paseo de olla, or Pot Road Trip as comedian Andrés López Forero translates it, is a very Colombian thing. On colombia.travel it is described saying "donde haya agua en Colombia la gente se mete, se moja (hasta con ropa), cocina y come". That means that wherever there is water in Colombia, the people get in, get wet (even with their clothes on), cook and eat. Weekends and holidays are when the paseo de olla typically happens: the whole family (parents and children, aunts and uncles and all the cousins, even the grandparents) gets into the car and drives out to a close-by river or to the sea, if they live on the coast. They bring a lot of food with them, sometimes prepared already but usually to be cooked on site. One of the dishes most typical on a paseo de olla is the sancocho, a hearty soup that consists of the following: caldo de gallina (chicken broth), presas (pieces of chicken, preferrably gallina vieja), herbs and spices (most importantly cilantro and ají), papa (potatoes), yuca (cassava), plátano verde o maduro (plantains) and mazorca (whole cobs of corn). It's good, let me assure you of that. Addicionally, there can also be things like rice to eat on the side or add into the soup and then you can also get aguacate (avocado) or hogao (a thick salsa made of tomato chunks, onion and garlic - typically caleño, from Cali), among other things. It's all up to your taste and preferences. The sancocho is transported to the river in a big pot - hence the name of the activity. You also bring plates and spoons and forks and knives, more food, drinks, fruit and sweets. And a football (maybe even a frisbee or badminton gear), camping chairs and towels, whatever else you might need or want. It's a pretty full car, to be sure.

Our version was a little lighter. Here's what we had: 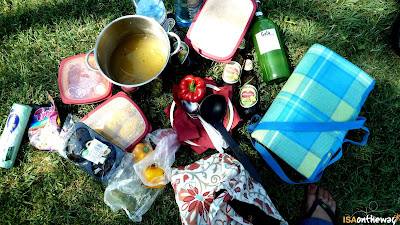 We found a spot in the shade to set up our picnic and then proceeded to enjoy the wonderful lunch prepared by Leo, our Colombian ambassador for the afternoon. It was a taste of home for him, a taste of a home for me and a glimpse into what Colombia is like for Iris and Wolfgang, because they haven't been to Colombia. Yet. 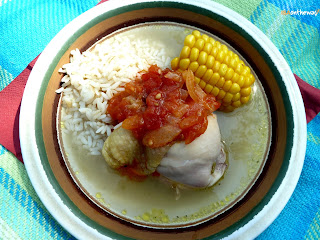 My plate: sancocho de gallina with rice, corn and a lot of hogao, no aguacate because I don't like it. 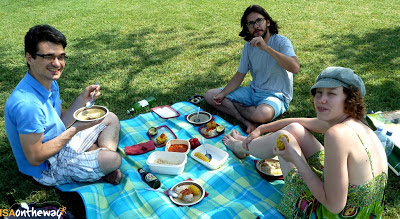 The three wonderful people I got to spend that afternoon with.

I'm really glad those two not only took time out of their busy schedule (packing and getting ready for their big trip) to come spend a few hours with me by the lake, but on top of that drove about 100km each way to do so! They're awesome.

A little while after eating - but definitely NOT half an hour - we all got into the lake. It had been a long time since the last time I swam in it. The last times I went it was either wintertime or I went to just walk around or sit in the sun, never to actually get in the water and swim. I can't believe what I've been missing, I'm such an idiot for not having taken better advantage of living right next to this piece of paradise!

The first moment was one of great difficulty, because the water seemed very cold. Leo got in much quicker than the rest of us and he was really "kind" and "helped" Iris and me into the water, getting us accustomed to the temperature by splashing us. Gotta be honest, though, it really did help! And the rest was fun and enjoyment. At least for me, although I think the three of them really liked it too.

Neusiedler See is an incredibly muddy lake, because it's so shallow, so that's something you have to get used to if you haven't been in it before. But the water is generally clean and has really good quality, even though you can't see anything if you dive and open your eyes. You need trust to swim in that lake, but it is definitely worth it.

So, that was my little piece of Colombia in Austria - the paseo de olla austriaco.

Now that I think about it... yes! It's also a piece of Trinidad at the same time, because Trinis also like driving to the beach or to a river to bathe and cook and eat and listen to music and play around. A little thing that now unites my three favourite places: Trinidad, Colombia and Austria.

I hope that more of these paseos will happen in the future.

PS: So how did the Colombian end up in Hell? Had to send him there, because he splashed me with cold water. --- And it helped me make it into the water more quickly, so I paid him back by showing him something beautiful!