Have you ever wondered what hell is like? Where it is located? What you have to do to get there?

Merriam-Webster defines hell as "a nether world in which the dead continue to exist", a "place or state of misery, torment, or wickedness" or a "place or state of turmoil or destruction". The Urban Dictionary tell us that hell is a "place where you get poked with pitchforks by red men with horns and goatlegs and listen to the Village People sing for the rest of eternity" or a "computer equipped with Windows 95 and missing the Ctrl+Alt+Delete keys". Usually, you'll be told that hell is located in the depths of the Earth and that you have to be a very bad person to get there.

I am going to tell you something different, something that might surprise you.

What is hell like? Hell is a very nice place. It's pretty flat, no hills or even mountains. It lies at the border of a very shallow but very large lake and itself contains a few small salt water lakes, regularly dried-out biotopes that are (almost) unique and very important to that region. It's a natural paradise, partly because of the small salt water lakes, partly because it's one of the spots that migratory birds visit on their journeys and partly because of the climate. It's not as hot there as typical images of Hell would have you believe. Instead, it's warm in summer and mildly cold in winter and almost always sunny, it doesn't rain a lot there. Wine grows in Hell, as well as wheat and corn and lots and lots of trees and flowers. There's also a restaurant and wine tavern there and it's a very popular area for bycicle tours, long walks and even fishing and kite flying as well as surfing. Yes, Hell truly is a very nice place. There's no denying it.

Where is hell located? It is located in Burgenland, Austria, in the territory of the village of Illmitz, which is the largest village in Burgenland, by area. If you look for it on Google Maps, you'll see. If you don't want to look for it, here are two screenshots of the map so you can see it while continuing to be a lazy bum (you might go to hell for being so lazy - if you're lucky). 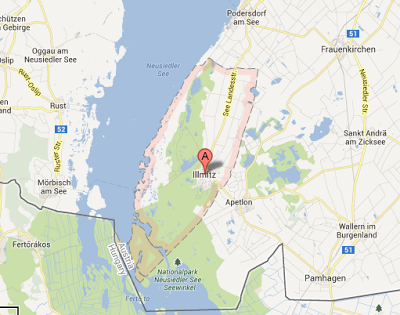 Hell in German is Hölle. That's what you'll see on maps and signs.

That very shallow (median depth of 1 metre) and very large (approximately 315km² at the moment) lake I mentioned above is the Neusiedler See, the second largest endorheic lake in Europe (after lake Balaton in Hungary), part Austrian and part Hungarian, but one hundred percent beautiful. It is the largest lake in Austria and not only is it (including the area around it) a National Park, the area surrounding it was also proclaimed a UNESCO World Heritage Site in 2001. That means that Hell is considered by the UNESCO to be "of special cultural or physical significance". Makes sense, right?

What do you have to do to get there? You might be expecting an answer like "You have to live a life of sin." But no. What you have to do to get there depends on where you are right now. If you're somewhere other than Austria, you have to take a plane or a train or a ship or a bus or a car to Austria first. If you're in Austria already, you have to make your way to Burgenland, specifically to Illmitz. From Vienna and by car, that would mean driving south on the motorway A4 and then taking the exit Gols/Weiden. Then you go straight at the big roundabout, pass right through Podersdorf and Illmitz is the next village. If you go all the way, you'll have passed Hell, which lies a few kilometres outside the village itself, to the North. If you're already in Burgenland, maybe even in Illmitz, you can take your bike to hell. It's really not far at all. Or the bus, Hell has its own bus stop. That's how nice it is, people really want to go there!

Now let's look at this more closely, at its implications. If you consider the fact that my family is from Illmitz (partly, the other half is from Pamhagen, just around the corrner) and I grew up there and Hell is a part of Illmitz... well... basically... you could say: I am from Hell.

Don't be scared of me now, though. I'm still the same person you know and (hopefully) like. Just because I come from hell doesn't mean I am a demon. It just means that whenever somebody gets mad at me and tells me to go to Hell, I get to say things like "Sure, can I borrow your car?" or "Good idea, I haven't seen my grandma in a while anyways". It drives them even madder!

With it being part of the village but not being located inside, but next to it, I haven't spent all that much time there over the years. I have, however, gone there twice this weekend. After spending almost a year away from here, I wanted to (and had to) go visit my family as soon as the opportunity arose. That was this Friday and Saturday. And because a friend of mine, Yunus, who I met in Puerto Rico almost a year ago, happened to be in Vienna this weekend, I invited him to come along. Before taking him to the train station in Neusiedl yesterday afternoon so he could go meet another friend in St. Pölten and see more of our beautiful country, I put him through Hell.

But don't worry, he loved it!

And now he can tell everybody that he's been to Hell and made it back out alive. Without even a hint of a lie in it. Take that, all you people who think you have interesting travel stories.

Later that same day, I did it all again. I also took Leo, who I mentioned in the last entry, to see Hell before we went to Vienna together. How did the boy from Colombia even get to Burgenland in the first place and how come he deserved to be sent to Hell? I'll tell you just now. And, yes, he loved it too.

I hope to go again soon, because for some reason I failed to take pictures the two times I went this weekend. The only picture I have is this one of some vineyard rows. It should give you a pretty good impression of what Hell is like, though.

Dear everyone, GO TO HELL!!!

Posted by isaontheway at 8:39 AM