First and most importantly: BAKE AND SHARK – a treat unique to the island.

You know why this is the first item even though it’s not as wide-spread as all the others. You know, because you have heard about this before. From me. You’ve either read about it on this blog and already seen pictures of it. Or you’ve heard me proudly talk for half an hour about how Richard from Richard’s Bake and Shark got to know and recognize me and knew what my ‚usual‘ was because I’d become a bit of a regular at his beachside place during a time where I went up to the North Coast almost every week. Or you never needed to hear or read anything, you understood it all fully when you saw my eyes glaze over and my mouth form the faintest, most blissful little smile at the mere mention of Maracas Beach, where Bake and Shark is freshest and best.

And now you want to try it too.

So you take a car and you drive up to Maracas, away from the gulf and into the Northern Range and then down towards the Caribbean, to go on a quest for a sandwich of your own. You park your car and walk over to the little row of huts opposite the white(-ish) beach, where bellies roar opposite where the waves roar. You get in line at Richard’s. It’s a long line, but it’s worth it, it’s just more proof of how high the quality and how heavenly the taste are. Now it’s your turn. You order a bake and shark. Fried pieces of shark filet in a fluffy piece of fried bake. Sounds like a lot of fried stuff? Well, maybe. But you don’t eat this every day (more like once every few months if you’re like me, or maybe even only once ever if you’re visiting) and don’t worry, you’ll get to freshen it up in a second. So you’ve got your sandwich now, you paid the 30 dollars TT (What a steal!) and you really want to bite into it already, but instead you turn around and get into the next line. The one that snakes around the dressings and condiments. A whole array of sauces (like mango, garlic, tamarind, ketchup and hot pepper) and add-ons (like lettuce, tomatoes, cucumber slices and chunks of pineapple) the size of a dining room table. All for you! Last, you get yourself a drink. Then, finally, you go sit down somewhere private, where nobody can disturb you and your sandwich, and you dig in. Bite after bite after bite of everything that’s good in this world channelled into your lunch. Yes. 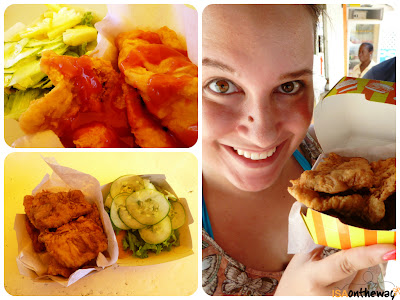 I usually get shark without the bake and then accompany it with just ketchup and hot pepper, lettuce and cucumbers and, if there is any, chunks of pineapple.

I may be biased, but I swear I’m not exaggerating. Okay, maybe. But just a little bit. Go try it for yourself. If you’re concerned about the fact that you’re eating a shark and sharks are an endangered species, well there are options. I was told that it’s not a problem, because local fishermen do the fishing, there’s not many big fisheries who empty the seas at ridiculous speeds. And you can always just try it once and then never again, just for the experience. If you don’t want to do that, I fully understand. In fact, I thank you for it. Because it means you’re environmentally conscious and that’s great. Or, maybe, you just don’t like fish, that can be an issue too. Well, right behind Richard’s, there’s Asha’s. They have other kinds of fish for those who don’t like shark and chicken for those who don’t like any kind of fish and plain portions of fries for vegetarians and vegans. And you can get a plain bake, or bake and veggies or bake and cheese at Richard’s too. So don’t worry. You won’t starve at the beach.

I really do recommend trying it at least once. It’s worth it.

Posted by isaontheway at 1:20 PM