Yes, yes, I know. A long time has passed since the last time I posted something even though I so promised I would get better with this. But, honestly, I always say I'll get better. Do you really still believe me? Really? Well, OK. I guess you're a very trusting person. I'll try my best just for you. And right now I don't care what Yoda said, a try is all you get! I'm sure you understand. And if you don't, at least you'll be able to simply accept.

As you could have guessed from the way I wrote about the Temple in the Sea, it was only a matter of time until I started getting more serious about the meditation I already mentioned in the post about the Botanical Gardens. Well, it is all coming together now.

I got a beautiful mala, a set of prayer beads, from Kwesi, yesterday after we visited the opening of an art exhibition at the Night Gallery in Bohemia, where Freetown played a while ago. It was great, because the artwork was absolutely stunning, the music was wonderful (Kwesi played amongst a whole round of other people) and Thais was there, so I got to chat with her and friends of hers throughout the evening, in English and in Spanish! And the beads, they're magical. Or, they're going to be pretty soon.

What I aim at doing is, I want to fill them with positive energy to carry around with me.

Does this sound stupid to you? Then stop reading here.

Through meditation, I want to reinforce the energy of everything that's good in my life right now. That's quite a lot, blessed as I am. I would like to express how grateful I am, but I can not, I don't have the words for it. And you know this to be true, because you've read this blog for a while and you've seen this before. Me, bursting at the seams with love and gratitude and other warm, fuzzy feelings. Everything is incredible and I'm doing my best to take care of all the bad stuff and then just using those experiences to grow and learn and appreciate the good ones even more. Meditating with the beads, all that positive energy from inside of me and around me would be channeled into the mala and that way I would have it with me wherever I go. Like a talisman. No, like a backup battery for the soul!

I don't want to wear them 24/7, however, because my skin takes on marks pretty easily and I don't want their pattern permanently etched into the skin of my left wrist, so I have two spots for them at the moment. I say at the moment, because once I leave Trinidad I'll have to find a new second spot for them. 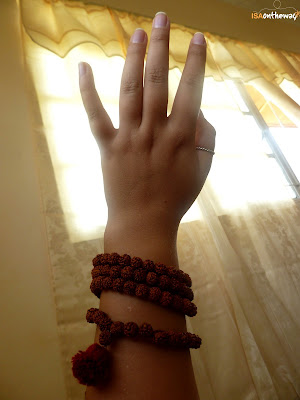 Too large to fit with 4 rounds, to small to make 5 rounds. Still, perfect fit. 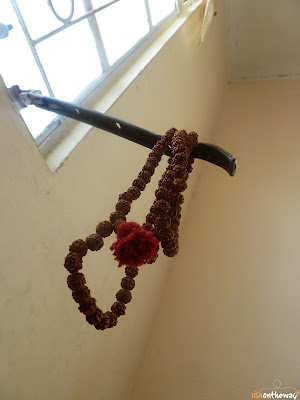 I took this picture in the morning, because all the ones I took at night are blurry.

At night, I want to have them close but not directly on me, in physical contact, because I know I'd wake up with bead relievos not only on my wrist, but also my stomach, my chest and my face. And that is not what they're for, I don't want any negative feelings associated with them. So they spend the night hanging right over where I rest my head while sleeping, watching over me, basically.

Malas are used by Buddhists as well as Hindus for keeping count of the mantras that are chanted during prayer and/or meditation. That's why I chose this title for the posts, it sounds a bit like something that could be chanted, doesn't it? Phonetically, that is. There are short sets with only 16, 27 or 54 beads, but mine is a long set with 108 beads. If you use the full set, that counts as one hundred recitations and the extra eight are there to make up for any mistakes you might have made. "Por si las moscas."

The bead with the red fluff next to it is called the head bead, or Guru bead. Once you reach it, you can turn the mala around and do a next 108 repetitions in the other direction. You can do as many sets of 108 as you want, depending on how short or long your mantra is or how strongly/deeply you want to meditate on it. At least, that's my take on it.

If you want to know more about this from people who are more experienced and knowledgeable on the topic than me, who's just starting to learn, then you can check out this link.

In many ways, I feel like this can be compared to a rosary. The big difference is that a mala can be used for many different things aside from mere praying. That's what I like about it. My own mala will be used for meditation and giving thanks - and there's so much I have to give thanks for! No praying, though, unless you count that as prayer. Because while I am discovering a more and more prominent spiritual side to myself, I am still not religious.

Yes, spirituality. It's big here in Trinidad. At least in my circle of friends and acquaintances it is and it feels good. I have my own little system of beliefs, made up from various random things I like, that I pick up from religions or spiritual teachings, or kids' movies. Trust me, wisdom can be found anywhere and everywhere. But I feel like it's all more intense for me here in Trinidad than it was in any other place I was before.

The same goes for creativity. I constantly want to make things, it's unbelievable. And there are people here, friends of mine, who feel the same. And we make things together. This is not just about the bags I sewed, this goes further. I bake again, with and for friends. I might soon get to teach Kwesi my jewellery-making techniques. And last night, Thais said she could teach me how to make baskets out of newspaper and purses out of Tetra Paks. Amazingness!

It's beautiful, it really is.

And to leave you on a feel-good note as well, with a tiny little bit of beauty, maybe, here's a picture I did take last night and that's not overly blurry. It's a picture of one of my windows, one of the ones above my head, the one the mala rests on. Sometime around midnight, with nothing but tranquility and calm all around. That's not something you get all the time in St James, so when it happens, it's very much appreciated. Therefore, a commemorative picture. 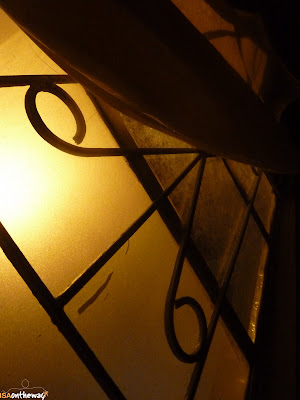 I don't know about you, but I really like this.