The Ghost of Beaches Past.


Congratulations, you have arrived at a post about beaches! This must be exhilarating, I'm so happy for you, really. Congratulations.

This beach is located on a stretch of coast along the Atlantic, on the eastern side of Trinidad, a few hours' drive from Port of Spain. It might seem a long way off for a day trip, but it's absolutely worth the time, effort and gas money.

I'd been to this place before, the first time I came to Trinidad with a university excursion on the topic of slavery and slave resistance in the Southern Caribbean back in the summer of 2011. I even have the photos from back then on my computer still, the following one is from the picturesque road that connects Manzanilla and Mayaro: 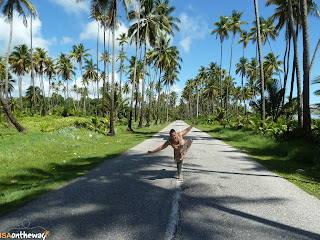 This most recent trip occurred the Saturday before last, with Michael and the two CouchSurfers he was hosting at the time, Alana and Karim. They're a really nice young couple, she's Brazilian and he's Belgian, who are travelling around the Caribbean in search of the perfect place to have their baby. To spare them the huge detour west through Port of Spain - because our trip took us East - I travelled out to Curepe to meet them and we started out towards the Atlantic coast from there. The drive was spectacular, simply because going for drives in general is spectacular. All I need now is for myself to be behind the wheel next time, because I miss that. A lot. 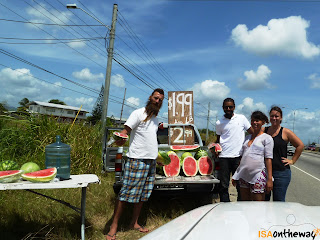 On the way to Manzanilla, we stopped along the highway to buy some watermelon.

The time at the beach was very relaxing for me, even though I didn't go into the water. I just spent the hours we stayed there walking along the edge of the ocean, taking pictures and admiring everything I saw - from stranded jellyfish over horizontal palm trees to treebranches that looked like they'd originated in a Dr. Seuss children's book.

I took a lot of pictures, but I decided not to post too many, so I made some collages again. I thought that collage-thing was just a phase, but if it is then it's a pretty long one, because I am not yet over it! Not by a long shot. 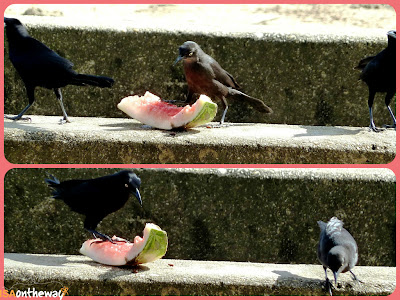 The birds loved our watermelon! 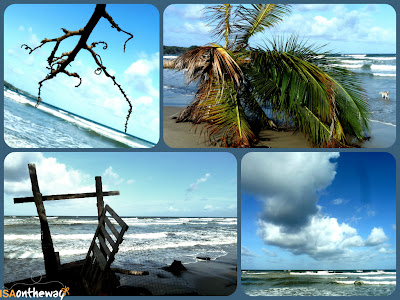 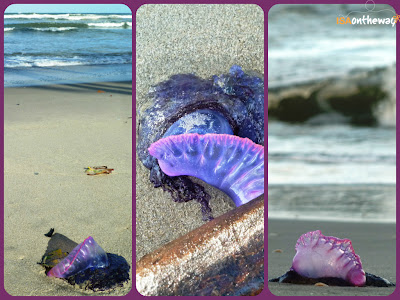 Stranded jellyfish. Tons of them all along the edge of the water.

I'd say this beach is not ideal for bathing, because of the high number of jellyfish you find there, in and next to the water. But it's a wonderful beach for going for walks, chilling on a blanket in the sand and it serves as a destination if what you want is to go for a relaxed drive and see different landscapes - because if you're coming from Port of Spain then your surroundings will switch from mountains to hills to coast.

We only made it back to St. Joseph rather late, so I decided not to travel back to Port of Spain but stay there, taking advantage of the fact that everybody else had to go into town the next morning and I could ride along in the car, avoiding the maxi+taxi combination. As always, yay for CouchSurfing and friendship! 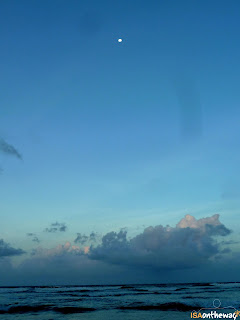 The moon was already far up in the sky when we started our way back towards the car.

Las Cuevas, unlike Manzanilla, is almost completely free of of jellyfish as far as I know. At least, I've never seen any of those little seamonsters anywhere on the North coast although there are signs in the area that warn to be careful of them. Still, like Manzanilla, I hadn't been there since the first time I'd come to Trinidad, that same August of 2011.

I went there last Friday with Ariston. Usually, Friday is a good day to go to the beach, because everybody is at work and you tend to have the whole area to yourself - no having to look for a nice spot forever, no standing in long lines at the bake and shark stalls, no people watching you fall over every time you get hit by a wave and laughing their asses off at your expense. This Friday wasn't, because of Easter. It was a public holiday, so everybody and their grandmother came out to enjoy the day by the seaside. For Ariston and me, that meant that we had to get our shark at Nathalie's instead of Richard's (his is better than hers), we had to walk a long way from the parking spot to the beach and we were surrounded by picnic-ing families when we settled down in the sand.

It was still a pleasant day out, sitting in the shade and then strolling around with my feet in the water, taking pictures of the rock formations that give Las Cuevas its name. And of other things. 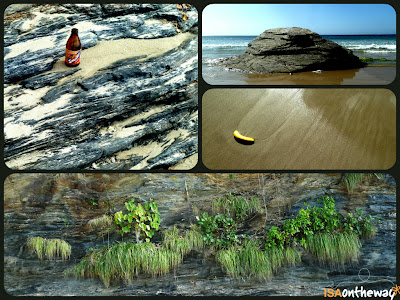 We walked all the way over to a separate stretch of beach where people were spending more than just a day - some were there for a night, some appeared to have set up camp for even longer. There was an entire house made of cardboard boxes, with a big sound system inside (as in: various big speakers) and a few hammocks in the tree next to the improvised building. I'd never seen anything like it before, believe me, it was quite cool.

From that day out, we got back a lot earlier than the previous one, so not only did I sleep at my own house that night, I also didn't. Wait, what? Because we got back to Port of Spain in the late afternoon already, I got to go out that evening. I went to a party with the theme of "Sunglasses at Night" with Pedro, Josimar and Thais. I don't own any sunglasses, but it was still fun. Until after 4AM - therefore, no sleeping at home until the early morning. Long time since I'd gone out until that late... remember?

And with that said, we're almost up to date again! It's funny, I really try to keep you posted about what I do and what's going on, but then there will be days where I'm so busy that I don't get around to writing anything at all and suddenly I'm like five stories behind. Right now, though, I only owe you one more story: that of the concert I spontaneously went to on Saturday and who I went with.

Will write that as soon as I can, because I'm already looking forward to sharing it with you!


PS: I know there were no ghosts in this story, but I really liked that for the title.

Posted by isaontheway at 8:18 PM