Let me tell you why.

I got up in the morning and went up to the supermarket almost right after rolling out of bed, having calculated how long I'd be allowed to doze without losing time for the things I had to get done. Up there, I bought a bunch of veggies and some pasta to be converted into a light pasta salad for an outside lunch with Kwesi. Yes, it's continuing, I'm not mistaken so far!

We'd been talking about meditation online and via text message, so we decided to meet up and have lunch in the grass under the trees to keep talking about meditation and possibly try it out. See, it's one of the things I'd been wanting to try out for the longest time but still hadn't. Like Yoga. I've been interested in that for years and it took me until last month to finally get started. Ridiculous, but better late than never.

At 1PM we met in the Botanical Garden right north of the Queen's Park Savannah in Port of Spain, or rather, in St. Ann's. We found a place in the shade of some trees, a little ways off the main grassy park areas, which were full of families enjoying the nice weather, due to it being the weekend. It was a nice atmosphere, with children running around playing, but too full of noise and movement for us, who were looking for tranquility and relaxation.

First was lunch: my salad made up of broccoli, snow peas, carrots, mushrooms, tomatoes and some whole wheat spiral pasta with a special vinaigrette my dear Pedro had helped me make. After that, though, we decided to find a different spot in the gardens, because a) there were lots of little crawlers in that area, what with all the fallen leaves under the trees and b) we were sitting on a slight slope that made my back hurt when sitting up really straight. So we found ourselves another spot under another tree, even more retreated but more levelled and less populated by insects. On that note: jumping spiders are annoying but pretty.

The next while, I don't know how long exactly, was filled with tasty and crunchy while at the same time melty cookies (Kwesi's contribution to food-tainment), some reading, more relaxing and meditation lessons. Not too much, but it was cool. Now I know what it's about, what it entails and, most importantly, I know that I can do it. 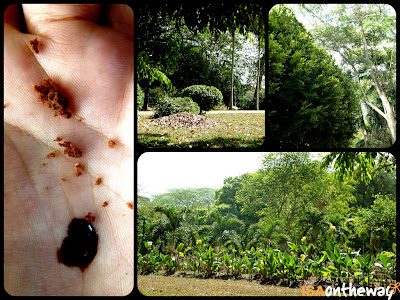 On the way out of the park, we ran into Josimar, who was attending one of his friends' birthday picnic (I think). We then continued walking, all the way back to my house. Walking to the Botanical Garden hadn't been possible, because the midday heat and sun were too strong for me, but by then it was already the very late afternoon so it was a nice walk. Walking attentively, not only watching but seeing, observing and taking in. 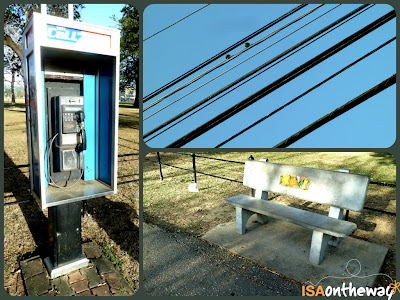 Walk with your eyes and your heart wide open.

Why did we go to my house? Because my external harddrive (the one with all my photos on it) was acting up and had decided to not let me use it anymore and instead play mouse. As in, it started making weird squeaky noises whenever plugged into my laptop. That is half an answer, you say? That still doesn't explain why he came to my house with me? Well, see, Kwesi knows about computers, like a lot. So he helped me fix it. Or rather, it's not really fixable, but he got it to a point where I could copy off the most important things to store them somewhere else and not lose the files most valuable to me. Phew!

And then Josimar showed up again, yay! I love seeing my friends so often, even when it's random. I like them and I like seeing them. (That's why they're your friends, Isa, duh...)

Even later than that, when Kwesi had finally escaped my can-you-help-me-can-you-fix-this claws, Fletch came by to pick me up. And it was about time too! Three weeks in the country and we still hadn't managed to hang out, not even for five minutes. But, finally, that changed and he picked me up and we tried getting ice cream in Movie Towne. Unsuccessfully. Turns out, though, that that was a good thing, because his roommate Anthony had been cooking all day and told Fletch that he'd made a lot of food and to come home to eat and bring me along too. Obviously, the huge picnic lunch had not been enough for me, so I happily went and stuffed my face even further. Yes, this was sarcasm. But, hey, you haven't tasted Anthony's cooking, so you don't know how very worth it it is to eat even though you're not hungry. Every time I eat at Fletch and Anthony's place, because I'm so lucky this wasn't even my first time, I wonder and wonder how Fletch is in such good shape and doesn't have to be rolled to work every day. Seriously, the man can cook! A chinese soup - to be drunk, not eaten, that's how traditional it was -, a yummy dish I'm going to call salmon strudel because in my head that's what it was and - here, we're entering the realm of pure decadence - a fresh strawberry tart. 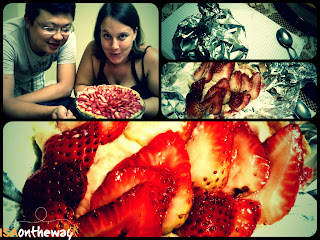 Deliciousness beyond words. And the rightfully proud chef.

After dinner, we lazed on the couch for a while drinking tea and watching MTV, until we were all yawning and it was time to go home. Anthony, as generous as he is gifted in the kitchen, let me take home a piece of his tart (as you can see in the picture above), so I'd be able to keep on enjoying it.

Getting home, however, I found Pedro still working on a big project he's been spending a lot of time on recently. So, instead of putting my piece of strawberry tart in the fridge to eat it the next day, I got two spoons, sat down next to him and invited him to share it with me. Because sometimes, when you're working hard and getting tired, a little piece of strawberry-flavoured happiness can give you just the energy boost you need to keep going and get your things done with re-charged batteries. And to allow you to understand how good that tart really was, let me tell you this: we sat there, eyes on the dessert, alternately taking tiny spoonfuls of deliciousness and savouring them slowly, the silence only interrupted by our "mmmm"s and giggles. That's how good it was.

It's days like this one that make life a pleasure. Simple days. Days where you spend time with wonderful people, enjoy the sunlight filtering through leaves, have some food, drink some tea, laugh and breathe and be. Just be!

It can all be so easy.

Especially when you're as lucky as me. Because when you're as lucky as me, then the day after all that joy, you randomly run into your friend Andrew on the way to the mall and you chat and he says he'll come by you later to hang out for a while. And then while you're at the mall you get a text from your friend Angel who spontaneously comes by to have a coffee with you and then helps you carry your heavy bags back home. And then you spend a really nice evening with them and feel loved and appreciated.