The Dark Side of Trinidad.


I have two beach-related posts lined up for you, one about Manzanilla from last Saturday and one about Las Cuevas from today. I think you'll like them, because beaches are always awesome, but I've rearranged my priorities and want to tell you about last night first.

The good kind of crazy.

The day before yesterday, Josimar accidentally mashed up (I don't know if this is trini or international English) my bare-as-always toes with his shoe-clad foot and it hurt really bad, but I didn't think anything of it until later I saw all the blood on my toes. Not that much, but more than there should be. Because there should be none! On my right foot, the second toe's nail had been lifted when he stepped against and was bleeding from underneath it and from the sides. The third toe was the one that worried me and him as well as Pedro, because that one's nail had been broken in half. Eeew! I know, it's gross. I'm not going to upload any pictures, don't worry. Also, don't worry, this is part of the story, it'll all come together in a moment. So those injuries were pretty bad, but not so much that I wouldn't be able to keep going about my business.

Last night, business meant going to Provocative Fitness to try a new workout there and later going out dancing to Sabor Latino with Fletch. Unfortunately, on the way home from the gym, I mashed up a next toe, all on my own. I don't even know what I did, but suddenly a third toe was bleeding. The big one this time. That's the reason I ended up not going out last night and staying at home instead - this is where it all comes together, because for the night to be crazy I had to be at home.

I spent a little time with Pedro, as most evenings, then I left him to his work and went into my own room to watch a movie. A little after midnight, the lights went out. In my room, that doesn't really matter during the night. It only affects me insofar as the internet doesn't work anymore, because the modem doesn't work without electricity. But I don't suffer from fans turning themselves off, because I don't have a fan in my room and just always sleep with the windows open and the curtains apart. What I do notice when the power goes out, therefore, is the streetlights outside my window not lighting up my room anymore - good thing. And the second thing is that all of a sudden everything goes quiet. It's those moments you realize, how loud all the fridges, fans, A/Cs, etc. really are. In our house and the neighbours' houses.

A few minutes later, I could hear people congregating in the kitchen, because apparently nobody had gone to sleep yet. So I went out there yet and everybody was there, looking for candles and chatting. We didn't stay in the kitchen, though, we went into the front yard, because it was too hot inside.

The moon was just one night past full, so outside, everything was bathed in silver. It was so beautiful. And because there were no artificial lights from the city - zero light pollution - we could see the stars for once. They were brilliant! It was brilliant!

Bernie, Richard and Saviour soon went back into the house to go to sleep, but Pedro and I stayed outside for a while. It was so great to walk around barefoot in the front yard, seeing all the stars and really also seeing everything around us, because the moon was so bright it might as well have been a very cloudy late afternoon, like right before a thunderstorm. We sat around then, chatting quietly so as not to disturb the silence and simply enjoying the night. Going for a walk in the neighbourhood would have made it perfect, but Bernie would have freaked out if we'd actually done that.

I brought my camera out, because nights like last night don't occur often and it's an opportunity that needs to be seized if you're into photography.

Playing with settings is fun! I even turned us into ghosts: 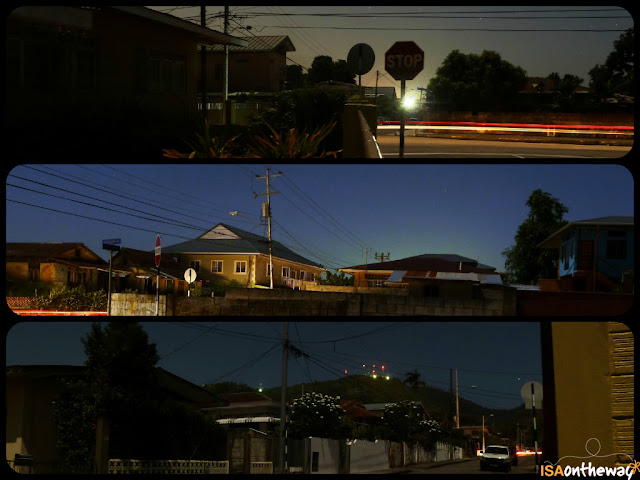 My street, only with moonlight and some passing cars. 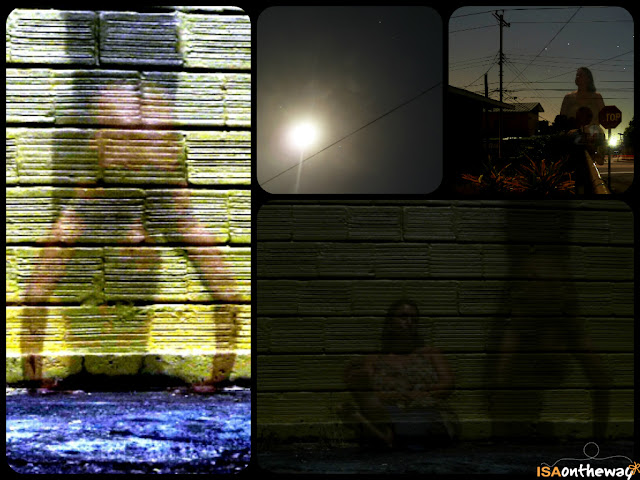 Pedrinho and I are ghosts.

Around 2AM, we did go back to our rooms and I went to sleep.

Power outages are no strange ocurrence here in Trinidad, we're all quite used to them. Same story in Colombia. But they don't often last this long, it will mostly just be a few minutes, or up to an hour, and then everything is back to normal. This time, it took longer. When I got up in the morning, there was still no electricity and, what's more, the water was gone too. That surprised me, because power outages don't usually affect the water. And the other way around. I asked Bernie what was going on and he told me that he wasn't sure either, but that one of the neighbours had a battery radio and had heard that it was a big power outage.

It wasn't just our block. It wasn't just Saint James. It wasn't just Port of Spain. It wasn't just the North. It wasn't even just Trinidad. It was a nation-wide problem that affected both islands. Both! Trinidad and Tobago was sitting in the dark - completely. And in the morning, Trinidad and Tobago was without current and without water. So, no electrically operated devices, no showers or flushing toilets, no internet - not even cell phones worked properly! I tried texting Ariston, who I met later, to find out if our plan would in any way be affected by th power outage, but the message didn't go through. When I tried to call, my phone just beeped into my ear loudly and announced that the connection could not be completed. Same thing happened when I tried test-texting and test-calling other numbers. That was something entirely new to me, a power outage so big that not even cell phones would work. Crazy!

The current, water and cell phone coverage all came back a little after 11AM, though, so it was all fine and Ariston and I could even do our beach trip as planned, but it had been quite the little adventure to see something like that.

Maybe you wouldn't see it that way - and I know for a fact that Trinibagonians don't see it that way. As people who live here and who might have experienced that happening previously (although Ariston assured me it hadn't been this bad in over 15 years), you wouldn't get that excited. And if it actually affects you, you don't get excited either. But to me, it was pretty cool. Lucky me didn't notice the difference between fan and no-fan in the moment of going to sleep, because I never have a fan anyways. My phone, computer and camera were all charged and I had next to nothing in the fridge. I had just showered so I had no problem in the morning and I had enough drinking water to take me through days, including when I used it for brushing my teeth. I know that not everybody was that lucky and I can only hope that nobody suffered any damage last night, as every time the power and/or water goes out. But me, I literally got to see the Dark Side of Trinidad! So yeah, pretty cool for me.

Now, the lights are on, the water is running, my phone has been beeping and ringing all afternoon and everything is basically back to normal.

But I won't forget last night's magic, between the stars and the almost-full moon and the complete lack of humming and clicking and rattling of all sorts of machines that usually disturb your peace when you live in a city...

Posted by isaontheway at 8:15 PM