Part 2 of the Return of the Jedi... to Trinidad!


Where were we? Ah, yes, Ariston and I were laughing our asses off while eating Häagen Dasz ice cream in Movie Towne. That means that the next day to tell you about is Thursday, the day of old paths and surprises.

That afternoon, at approximately 5PM I super-secretly met up with Josimar about a block away from the house. Why super-secretly and why a block away from the house? Because Pedro didn't know that Josimar was back in the country and we were going to surprise him later. I didn't know when exactly Pedro would come back from work, so we didn't want to risk being seen and thus ruining the surprise. So he picked me up about a block from the house to conceal the presence of his very recognizable truck and we headed to Maraval to get food at Subway and chapstick at the pharmacy across the street. Exciting, I know. After that, we went to Cascade, to Gillian's house (where I used to live), because she was hosting a meeting there to talk about communities, what they meant to people and how to build them and get the most out of them.

It was not only interesting and insightful, but also fun in that I saw some people again that I hadn't seen in quite a while, like Gillian herself. And also her boyfriend and some of her friends I used to see around the house when I stayed there. Plus, I met new people as well. All in all, very productive and positive. Even Michael was there and during a chance meeting in the kitchen (getting water for tea, surprise) we agreed we'd do something on the weekend. More on that later.

Afterwards, Josimar and I went back to St James, but not to my house: to Jeanelle's. She was having an after work lime there with all the people from the ACS, which included Pedro. I called him just before we got there and asked him to come outside and help me carry in the "thing" I had brought, because it was supposed to be a bring-something-to-eat-or-drink type of event and I'd told him I didn't have anything to eat or drink, but I did have "something". Oh, you should have been there and seen the surprise on the boy's face! So cute! Loved that; loved that I got to be a part in it and kind of half-orchestrate that surprise.

The rest of the night was spent listening to music and chatting and watching music videos on YouTube until I was so tired I was ready to fall asleep on Jeanelle's couch. Luckily, both Josimar and Pedro were also ready to go home then and I got to fall asleep in my own bed. After another while, because falling asleep right away is not my thing.

For the next morning, Friday, Josimar and I had planned to go to Maracas Beach, swim a while and have breakfast there. He was going to pick me up at 6.30AM, only it wasn't a phone call or text from him that woke me up but my own alarm. Thinking I'd overslept, I checked my phone and saw that there were no missed calls or messages, so I texted him and asked what was up. He'd overslept! We agreed that he'd come to pick me up at 9.30AM instead, so I closed my eyes for another five minutes. Or so I thought. I woke from loud knocking on my door - oops. I did oversleep after all, Josimar was punctual and I wasn't even up yet, but I was ready to go within less than ten minutes (including the brushing of teeth, that's how fast I can be when I want to) and we left Port of Spain not that much later than our new plan had suggested.

When we got to Maracas (after a quick stop to buy sunscreen) it was more beautiful than I'd ever seen it. You couldn't make out all the colours standing on the beach itself, but from the higher sides of the bay, as you drove in, you could see travel-brochure-esque waters! I never even knew Maracas could look that way. I wish we'd had an opportunity to stop by the side of the road to take some pictures, but we couldn't. You'll have to trust me, I guess. We parked the car and found a nice spot in the sand where we could leave our stuff while we bathed. There were quite strong currents, but the waves weren't as high as the last time I'd been to the beach and the water was also a lot warmer, although still quite cool considering it's Caribbean. We jumped in and then went over to Richard's to get shark for our breakfast and it was glorious as always. 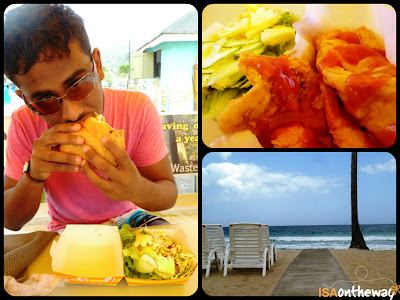 Josimar went back into the water after, while I relaxed in the sand for a little while and then did some crunches. Unfortunately, I couldn't do as many as I usually do, because the sand was uneven and my back started to ache after a bit. Better than nothing though, every rep counts!

Some time between noon and 1PM, Josimar had to get working, so he dropped me home and I don't remember what I did for the next while, but I know that at about 5.45PM I was picked up again. This time by Mike and Alison, a couple from the UK, who had just moved to Trinidad because of Mike's job. How do I know such people? Because I'm part of yet another online community: InterNations.com. It's a network for expats all over the world and because I have developed an interest in migration studies, I thought going to the March edition of their monthly meetup would be a smart idea. And indeed it was. From 6 to after 9PM I did nothing but make the acquaintance of one new person after the other, because I knew absolutely nobody there when I arrived. Not even Mike and Alison, I'd only spoken to them on the phone earlier that same day, so everyone was new. There were a few foreigners who had moved to Trinidad, but mainly Trinis who had lived abroad before. And everyone had their own interesting story to tell, so it didn't get boring even after three hours. It really was a lot of fun, just really exhausting because I'm not that social a person so meeting so many new people was a tad stressful for me. Still very nice, though.

A bit after 9PM, Andrew came to pick me up from there and we went on the Avenue to get some food and then we walked around for a while chatting while figuring out if we wanted to go to a bar or not, because we both had to admit we were a little tired. It was so nice to see him again, I'd missed him while I was gone!

Then, later that night, something really cool happened. Michael and I had agreed to speak that afternoon about what we were going to do on Saturday but he forgot to call. Josimar and I were going to meet up again in the evening and he did swing by the InterNations meeting, but then I ended up hanging out with Andrew while he went out with Pedro and Jeanelle and their friends. Both of them called me after midnight. Michael, to set up a plan for the next day; Josimar, to find out if I was still out or already at home. That fact, that I got two phone calls in the middle of the night, made me really happy. A happiness that stretched from right then way into the next morning and, really, until now. And yes, I'm certain I'd feel the exact same way even if I hadn't still been up and they'd woken me up with their calls.

At least, that's how I feel.

There are still two days left to complete the recount of my awesome first week back, but I'm going to leave those for tomorrow (or so), because I have so many pictures that I want to dedicate a post of its own to them. You should be looking forward to that, because you'll get to see a side of Trinidad I haven't shown you yet.