Back to the Roots via Memory Lane


Being back here in Trinidad, I feel like I wasn't really gone for as long a time as I actually was. January 31st to March 17th, that's over a month and a half, yet I feel like I've only been away for a week or two. And I've figured out why I feel that way: I was almost completely inactive for all of the first month I was in Cartagena. Aside from a short weekend trip to The Island, I did absolutely nothing interesting. I've mentioned that I've been working on something important and, well, that took up all of my time and therefore I could have been anywhere and my location would have made no difference, I would still have spent all my time reading/writing/sleeping. At the same time, Béa was also very busy with work so neither of us tried to drag the other one out of the house for an adventure and we both just concentrated on our respective top priorities without enjoying the fact that we were in one of the most beautiful cities of all of the Caribbean, which we usually don't forget for even a day. Still, I'm very happy that I was with her during that period, because she helped me a lot when I got super nervous about my project and I tried to help her with her workload too, when I could. I hope I actually did.

Because timing is a bitch, the day Béa had to leave Colombia for a long work trip coincided with the day I finished stage one of my project so my free time started when I was alone in the city. Thanks, timing, eff you. In some way, that made it more interesting, though. Back when I started coming to Colombia, my life was quite different from what it was like in the last year. With my friend, roommate and weekend-stupidity-accomplice gone, all I could do was go out and re-discover what Cartagena used to be, what she used to mean to me.

Thus started my two-week trip down Memory Lane, all the way back to The Roots.

It's not like I did very much or anything special, really. I just went back to doing the things I used to do and doing them the way I used to do them. Taking the bus or a colectivo instead of a taxi, eating in the street instead of a restaurant, sitting with friends on the city wall instead of going to a bar, and taking walks along that wall, up on top, all the way around. Please don't think I'm complaining about the way things were in the last year, not even a bit. All those changes that happened were changes I made myself, whether consciously or not. No, I am not complaining at all, it just was nice to revisit the way things used to be one last time before leaving Cartagena. Because this time, for the first time in many years, I left Colombia without knowing when I'd be back.

One weekend, Carolyn from downstairs and I went to Tierrabomba, to have a little beach adventure. We took the bus out to Bocagrande and then from there took a boat over to the little island, after negotiating prices and times with the boatboys. Had a very relaxing time there, although I did manage to burn my face, chest and stomach like some idiot that's never been exposed to the sun before. But before you get angry with me for being so silly and burning my skin (yes, this sentence is directed at you, Béa): I bought sunscreen a few days ago! And I even used it at the beach that day. So it's all good, it won't happen again. We can calm down now and keep enjoying the blast from the past.

Another weekend, or possibly the same one, I really don't know, I went with her and Indira and their friends Nolbert and Ali to a place called El Baúl de los Recuerdos - the memory chest - out in Las Gaviotas. Unlike when we went to the beach in Tierrabomba, this time there were cameras. Well, a camera. Still, here's a picture of those fun guys who took me along with them to sing loudly and falsely to really old latino rock, pop and a loooad of ballads.

What I really liked and what constitutes the central part of that trip back in time was the visit I got from my friend Mark from Trinidad and his friends Nick and Marta from Jamaica. They arrived in Cartagena on Sunday afternoon, exactly a week before I left, after a wedding they'd attended in Barranquilla. We went to Café del Mar for drinks and then to Mila for dinner and it was really nice, but everyone was tired so it was a short night. Okay, though, not a problem at all. What was a problem, however, was that the next morning Mark had to leave Colombia hurriedly and get back to Trinidad because of a dental emergency. Poor guy, but he later sent me an e-mail telling me that he'd made it fine and gotten treatment. So no need to worry.

Now I had a decision to make: Do I leave Nick and Marta to themselves, because the link between them and me has just fled from the country or do I keep them? Well, I'm guessing that by now you already know me a bit so you know: I kept them!

And I must say: best decision possible.

I had a great time showing them around the city, introducing them to all the things that had originally made me fall in love with the place and sharing stories and anecdotes. At the same time, Nick was preparing a radio documentary about the afrocolombians in the area and because I'd previously worked on the topic in the course of my university studies (a paper on afrocolombian culture, a paper on the palenquero language and my thesis itself, which featured a lot of just that because of its focus on the Colombian Caribbean) I was able to help him out with the gathering of information on the topic. First, I sent him the first two - shorter - papers and some of my YouTube videos that show traditional music from afrocolombian communities in the area, then I took him and Marta to The Island and introduced them to Ana Rosa for an interview and we also got some bicycles to go into the village and talk to some people there (which I haven't done in such a long time, I can't even believe it) and then after coming back to Cartagena I got him an interview with the head of public communications at the Observatorio del Caribe Colombiano so he could get some of the official information taken from studies and investigations by researchers all over the country. They were happy to get all the information, the people we met with were happy to share their stories and see the interest in their cause and I was on cloud number nine because I love when I'm able to help people and this time especially, because I think this might have been the first time that I got to make use of my studies "in real life". Awesome! 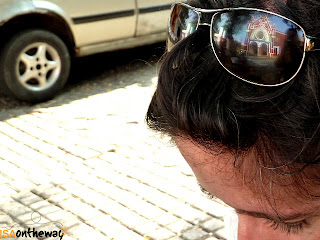 Always interesting to see a place through somebody else's eyes. 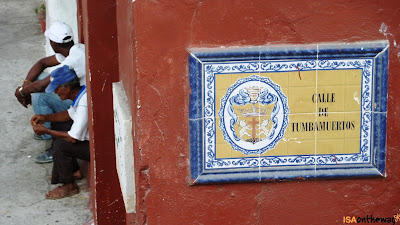 Revisiting all the places and seeing the people, it wakes old memories. 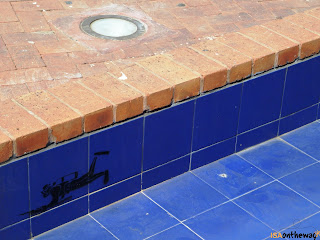 When after so much time a place can still surprise you, it's special.

And because Nick and Marta were staying in the place that used to be my home before I found a new one with Béa, the Bellavista (Mark had asked me to get rooms for the three of them and where else was I going to put them, right?), I also went there almost every day, to pick them up or have dinner with them - and every time I got to spend a little time with my dearies: Adriana, Monique, Stiven, Enrique, etc etc etc. Wonderful.

Can you feel the positive energy here? It's like I'm sitting in a cloud of it. No idea if it's coming through the words and you can feel or see it too. But it's great. I really enjoyed showing those people around and sharing "my" Cartagena with them. Although of course I missed Béa a lot, but they made it easier for me to be home alone, because I didn't spend a lot of time at home.

It's truly a pity I had such a huge load of work during the first month I was there and didn't get to enjoy the city during the whole time I was there, especially because I would have loved to have more high quality time with Béa instead of getting on her nerves with being stressed or tired, but I'm happy I got at least that. I might miss Cartagena, but at least we had a beautiful good-bye.

Cartagena, we will meet again some day, don't you think I'll forget you. Colombia is way too dear to me to just leave and never come back. I'm not the only one who thinks so, even Nick (who'd literally met me just days before) at one point said that by looking at me when I talked about the city, he could tell that I was going to be back. I like that.

And what I'm especially looking forward to: next time I meet Béa we will be in Austria, because I'm actually going there for a visit this summer and so will she, between work trips. And there I won't be hung up on a gigantic project so we'll be able to have real fun then. Yay!

About Trinidad, this first week has been truly amazing. In fact, I can hardly believe I only arrived here a week ago today. Incredible. I will tell you all about it, I even wrote down notes so as to not mix up days anymore. You're proud of me for that, right? You should be, I'm doing it for you.

Posted by isaontheway at 5:32 PM