Avocados are a food I don't like. Not really. I'll eat them if they're on my plate and morphed into the rest of the meal in a way that makes it impossible for me to separate them. And I'll eat guacamole - happily, actually. But no, I just don't really like them. I'm not a friend of them. Therefore, what happened last Sunday was a huge surprise for me.

Béa had found a recipe online for a breakfast meal that includes avocados. I was like meh... But I still decided I'd prepare it, because she likes avocados and I figured it wouldn't hurt to try them in this new way. And boy am I glad I did, because turns out I liked that breakfast! The fact that we ate it when it was even later than lunchtime makes no matter.

Believe me, nobody was more surprised than me when my face didn't turn into a scowl after the first bite. Okay, maybe my mom was. But aside from her, nobody.

Here's what we made:

Right, you caught me. Of course, the real reason I said 'yes' to making this breakfast was the fact that there's bacon involved. But don't you judge me, wouldn't you do the same? Exactly.

I cut up bacon into medium/small pieces and fried it until it was crispy and really pretty. Then I halved the avocado and took out the seed. Stone? Pit? Whatever it's called, I took it out. Then I had to make the holes in the avocado halves bigger to the egg and bacon would fit and not spill out over the edges. So Béa got a little pre-breakfast avocado sandwich. She was definitely not mad at me for that. The next step was to put the egg in the avocado, which almost worked. I had to get it back out and make more space in the avocado, but it worked on second try. Then I put the bacon in and popped the concoction into the mini-oven in the kitchen. I left in there for 15 minutes at top-and-bottom heat. Then another 10 minutes. Then another 5 minutes at only bottom heat. That little machine is really hard to manage, let me tell you. But the result still came out great - and surprisingly yummy!

At this point, are you wondering if there's going to be a picture? Yes? Really? You should know by now that there has to be a picture (if not twenty) because it's me and I take pictures of almost everything I do/see/play with/walk past. 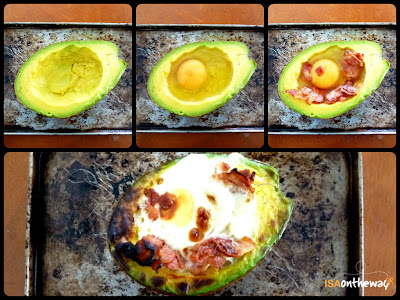 The first three pictures alone are worth eating avocados for, I really like them.

Luckily, we had been to El Bistro a few days before. That's a lucky thing, because El Bistro, owned by a German guy, sells real bread. Real bread! Like, the kind I used to buy in Europe and haven't eaten since I left Austria last July. We went there for lunch last week and got a loaf, so we used the last few slices for this meal. That made it really delicious. It wouldn't have been half as good on white bread or arepa, I'm sure of it. 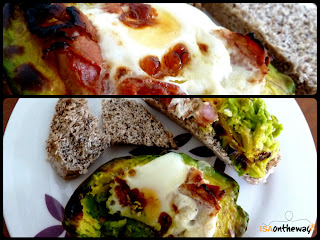 Top that with a little salt and pepper (black, not Trini) and you're set.

Now, I don't know if you've noticed, but I'm really into turning my photos into little collages lately. I found a great site where I can arrange and re-arrange my pictures in all sorts of crazy ways and it's already turned into an addiction. An intervention won't be necessary, though. Because it's pretty.

Already preparing the photos and collages for the pre-Carnival post.

Did you think I'd forgotten about that one?

Posted by isaontheway at 4:16 PM