No, this is not about sex. Sorry.

This is about the sea. The Caribbean Sea, to be more specific. I fly over it regularly and it fascinates me every time. It is so much prettier than any other sea/ocean I have personal and direct experience with... 3.5 hours of flight just fly by (sorry for this pun) like nothing when you have the Caribbean to watch from your window.

The last two times I flew, from Port of Spain to Fort Lauderdale on January 31st and from Fort Lauderdale to Cartagena on February 3rd, I took some pictures so I could share my fascination with you.

This first collage is from pictures I took while flying over the Bahamas. 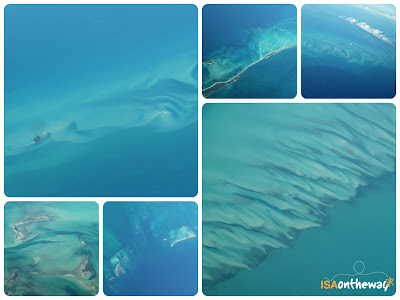 Doesn't this look just like a postcard? I know if it was one, I'd definitely buy and send it.

I love being in the sea, being next to it, even just hearing it. But being above it is also on the list of things I enjoy with regards to the sea. There's just so much to observe and marvel at.

And during that first flight from POS to FLL, I also saw something else. Something I'd never seen before. When we were getting closer to the Florida peninsula, the clouds became more dense and after a while we were just flying over a grey carpet instead of a blue swimming pool. It was then that I noticed something interesting. Unfortunately, it took me a while to summon the guts to bring out my camera and take a picture, because we were already in descent and you know how you're not supposed to use any electronic devices anymore once the seatbelt sign is back on and you're approaching the airport... Well, I did it anyways, but a little late.

What I'd seen was that the shadow of the airplane on the top layer of clouds had what looked like a rainbow halo. Like that rainbow-coloured halo you can sometimes see around the moon and the sun, you know? It looked like there was another plane below ours, made of grey smoke and flying inside a soap bubble.

Interestingly, as we got lower and lower and thus closer to the ground and the clouds, the halo didn't become bigger, as I would have expected. It became smaller, so in the picture I'm about to show you you'll see the halo only around the centre of the plane, when before it had engulfed the whole thing. 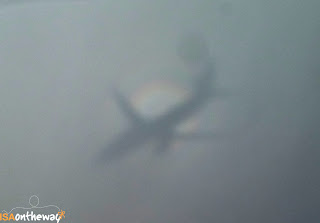 I heightened the contrast a little so you'd see it better, because the camera's picture isn't 100% true to what you really see - at least not with my camera. But aside from that minimal change I left the picture untouched and this is now exactly what I saw from my plane window.

Isn't that crazy? Can anyone explain that to me? What exactly was I seeing from my window, what exactly are we seeing in this picture? Let me know if you know!

Now, about the shades of blue. You might be inclined to say that there were only so many different hues in the pictures above, because they were taken over the Bahamas and in an area with over 700 islands, obviously there's a lot of colour change in the sea as the bottom is higher and lower in different places. But the thing about the Caribbean is that there's islands and cayos everywhere, if not in the same number as in the Bahamas or other island nations.

So the next collage shows two pictures that I took on the flight from FLL to CTG, just a little ways south of Cuba and Jamaica. 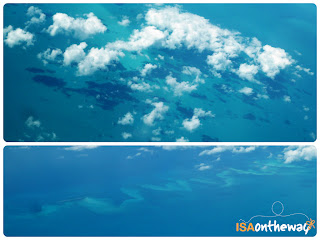 Not as intensely multicoloured as the one above, but amazing nonetheless.

What I showed you until now were about 30 shades of blue. So there's still 20 missing, right? Because I did promise you 50. Just like that dude with the book.

Unfortunately, for a number of reasons, the next shades of blue come from the fact that I feel blue right now. Not extremely, just a little. Well, more than a little, but still not extremely. Why? Because I wish I was still in Trinidad.

Not that I'm not happy to be in Colombia. I still love this country, but it's not the same anymore. It's great to be with Béa again, because we've only been talking on Skype for the past few months and now we're back together and planning (and doing) all sorts of mischief. Having friends, and especially friends like her, is a wonderful thing and I'm so lucky to have so many people in my life who make me happy. But... but... Trinidad, I miss you.

I felt like it wasn't the right time to leave and seeing how many things went not quite wrong but very weirdly during my trip from there back here, well, I guess I should have stayed. Now, I have to wait until I can go back, which will hopefully be by the end of March. Maybe even mid-March. We'll see. And I'll hope.

But, ...boy! The things I'm missing! It's still good that I'm not there for Carnival, because I have a lot to do and if I was there and partying nonstop then I'd be too tired to get anything done. But, oh boy, what I wouldn't give to be able to beam myself over there and join my friends for a fete or five... you get my drift.

I'm not going to end this post on such a negative note, though. I don't want to! And I'm sure you don't want me to either. So the last shade of blue is a really special one, not just any kind of blue, but SUPER BLUE!!!

Today is actually Fantastic Friday in Trinidad, so to celebrate that - even though I'm not there - I'm giving you this video to watch of Super Blue performing his incredibly upbeat and happy and energetic and amazing song Fantastic Friday.

Posted by isaontheway at 1:04 PM