I know, I know... I'm a walking and talking lack of discipline and I don't follow through with the things I promise. I know! Sorry, I'm trying. But as much as I wanted things to slow down before Carnival events started drawing my attention to my serious sleeping trouble so I could write the old stories before the new ones happened, I couldn't. More stress, more things requiring that I focus my mind on them instead of myself, more days passing without writing. But here I am, with words and photographs, so let's get past this and move forward, let's look at more Tobago.

On day two of Don's and my stay there, the 1st of January, everybody went to the beach. Ravi, his girlfriend Melany and her kids and their friends, Melany's sister, Zinga and Lindon, even Navin. We all headed over to Store Bay and then settled our hungover (not me) and tired (me) butts down in the soft sand of Swallows Beach.

We brought leftover BBQed chicken with us, leftover ham that Ravi still had from Christmas and that I cut up into bite-sized pieces with one of Ravi's awesome kitchen knives (Not quite like a machete, but so sharp it cut through that ham like it was butter that had been sitting in the sun... Yes, I like knives.) and we also brought more drinks, although I still kept away from them, just like the night before.

Let me show to you right now why people love the beaches in Tobago so much: 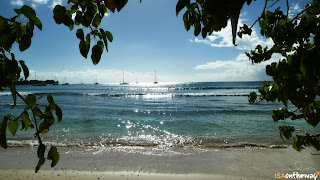 The clear blue sea at Swallows. 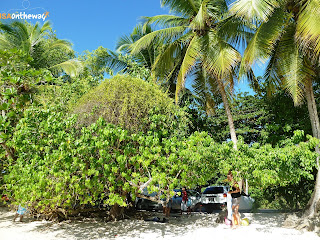 The beach and palms and trees at Swallows. 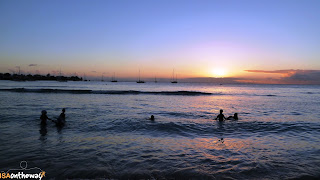 People practically bathing in the sunset at Swallows. 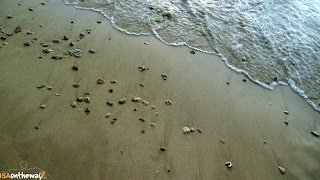 I like this picture. My favourite from that day. 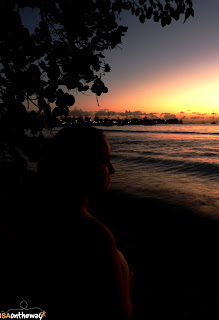 Me looking out at the sunset at Swallows.

Now, I said I'd crashed the night before. Unfortunately, that wasn't really so. It wasn't the real crash, because I still couldn't sleep proplerly that night and, well, it was visible the next day. Again, I had a great time with everybody, but I was definitely not at the top of my game. So, guess who went to bed again early. Yes, me. The old lady strikes again.

The next day, though, was much better. I was still working with a big sleep deficit, but slow recuperation is better than none and January 2nd was an adventurous day for me.

Why is that, you ask? Because we went to a waterfall. Not special for many, but very much so for me. I might not be a big nature person, but I love the water. The sea, lakes, rivers, even puddles. Man, puddles are fun! Therefore, going to a waterfall was really cool. The one we went to is called Argyle Falls, it's in Roxborough on the SE coast of the island, about an hour's drive from Signal Hill. Well, it was an hour's drive for us. Lindon kept on claiming that had anybody else been at the wheel (and by anybody else I think he referred to himself) it would have been no more than 30min. But, personally, I'm glad we drove slowly. Here's the reason: 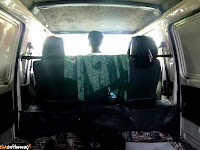 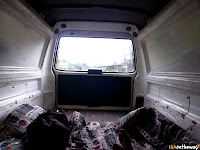 Traveling in the back of the van. No, it was not a kidnapping!!


If we had gone at full speed along that winding coast road, I'd probably still be full of bruises from tumbling around the back of the van and being thrown around every time we hit one of the many potholes. Those things are so numerous, they should be on a coin here or something. 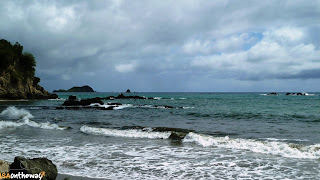 We stopped along the way to take pictures of the scenery. - I got out of the car for this shot so it really, really was not a kidnapping.


We got to Roxborough, paid the admission to the compound and started our way towards the falls.

At this point I'd like to point out what I was wearing. Not because it's particularly interesting, but because to those who know me it might be funny. Maybe even to those who don't. What would you wear if you were to go on a little hike through the forest to see some waterfalls? Shorts, a shirt, some kind of sporty footwear? Most people would do that. Not me, no. I went in what I'll call a "little black dress" (LBD, every girl has at least one of those) and flip flops. Did you think I'd say high-heels? Come on, not even I am that out of it. But I am that girl that climbs over rocks and marches through the forest barefoot, so of course I'm also that girl that goes on a forest hike in flip flops. Besides, it's not like I have proper shoes. Dear real hikers, deal with it. 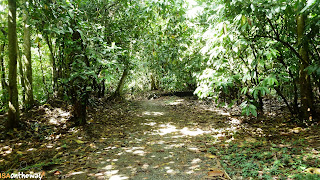 The walk to the waterfall. 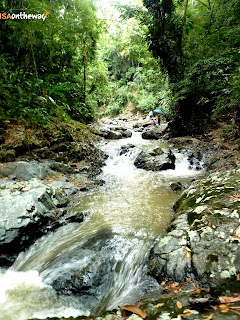 
Look at that path, being in flip flops was no problem at all. It would have been a problem if I had decided to climb up the side of the mountain to get to the top of the waterfall, but I was having so much fun climbing around the rocks in the water (to the other side of the pool and back and then into the middle again and around and back to shore...) I didn't even think about going anywhere other than in and out of the water. And like a real pro I did all that while still in my dress. I had brought a swimsuit, but those are for beginners. 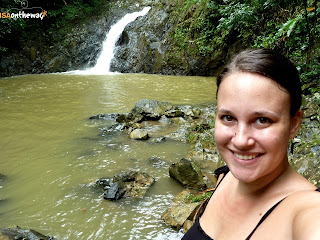 See, I didn't just get all those pictures off Google, I was really there myself. 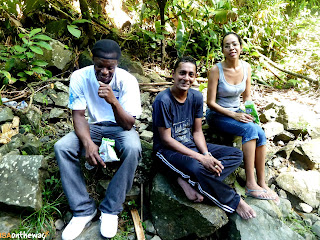 Lindon, Ravi and Melany - Don was swimming at the time, so unfortunately he's not in this picture. 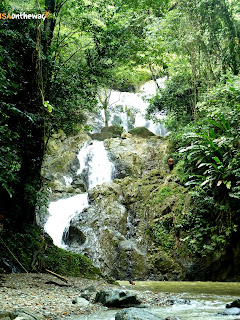 This waterfall trip happened on the 2nd of January and I was there until the 4th, but it still basically concludes the stories I have to tell about my time there. Not that the rest was boring, but we didn't do much on the 3rd. Don was dealing with a cough (that I managed not to catch until I was already back in POS) and everybody else was just relaxing. That's why on my last evening in Tobago I went to see a movie with Zinga and her boyfriend instead of going to some bar or party and liming with strangers - perfect end to the relaxing trip I'd needed so much.

My dear sweetheart Marcho Che had arrived in Tobago the night before and we knew that with him leaving Trinidad the day after coming back from Tobago we wouldn't see each other again. Insert ::sadface:: here... But because he's my dear sweetheart, he came out to the airport in the morning so we could spend some time together before I went back to Port of Spain. I figured it would be nice for him and Don to meet because they were going to be on the island for the same amount of time and they could do stuff together, snorkeling and suchlike. Don was going to Buccoo Reef that afternoon so I invited him to come to the airport (between the reef and the house, so no detour) with me so I could introduce the two of them.

What a mistake I made. 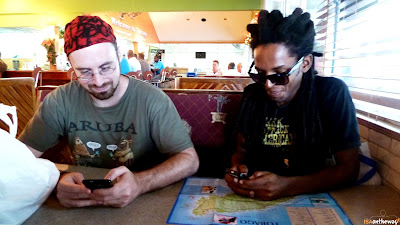 My so-called friends "keeping me company" while I waited for boarding.

Nah, I'm joking. They did spend a lot of time on their respective phones, but not the whole time we were there. Still, I decided to steal that map out from under Marco Che's arm to have a closer look at where I'd just been - because the pros look at the map when they leave, looking at it upon arrival is for beginners. Like swimsuits.

Here's what I found: 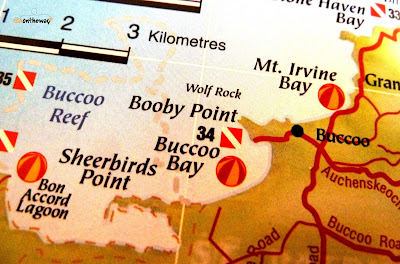 Booby Point. BOOBY POINT! I want to go to there.

After a while, though, the time came for me to leave my friends behind and head to my gate to catch the flight back from Tobago to Trinidad. It was still a good thing, because I was definitely ready to go home, so no ::sadface:: here. 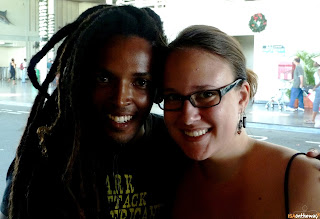 The first flight of the new year 2013 thus is what really concludes the Tobago story and all stories for a while, because I felt my throat being a little scratchy in the car on the way back to Saint James and by nightfall I had a full-blown flu. Yay...

But you know what the good thing is?

The good thing is that the next story I post here will be about the madness that is pre-Carnival time in Port of Spain. So give me a little more of your patience and keep looking forward to the next blog entry, I'm going to sleep now.

Yours truly,
the old lady.