Can you believe it?

It took 3 times coming to Trinidad and Tobago before I finally went to the second island that names this nation. Three! But I finally went. After over a year, when people now ask me "Yuh been Bago yet?" I can say "Yes!" instead of "Well, no, haven't had the opportunity yet, well, mumble mumble...".

It took 6 years of online friendship through HospitalityClub and CouchSurfing before I finally met my friend Don in person. Six! But we finally met. After six years of knowing a lot about this person but not how tall he is or what his voice sounds like, I can now finally put him on my list of "real life" friends.

Can you believe it?

Well, in both cases it was definitely worth the wait.

On December 30th (ages ago, I know...) Don arrived at Piarco International Airport and came to surf at my place before we headed over to Tobago the next day to spend New Year's in what so many people have described to me as paradise. He got here after a long trip all the way from Pennsylvania, so we didn't do much that night. We only went down to the Main Road for a couple of beers (he drank those, obviously) and went to sleep early, because the next day more traveling was on the schedule - as well as partying.

So on the morning of the 31st a neighbour took the both of us back to the airport, where we checked in, had breakfast and then took some pictures of and with the very pretty and very caribbean Christmas decorations they had there. 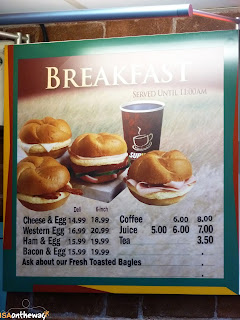 This picture got my hopes up really high, but Subway didn't actually give me a Semmel for breakfast. 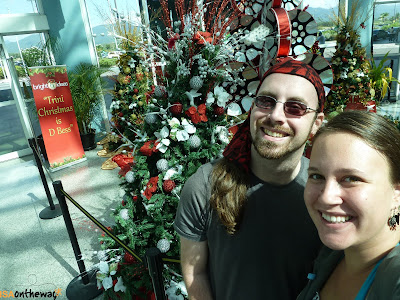 It's a steelpan Christmas tree in the background!

After a while of fooling around in the steelpan exhibit (actual ones, not fake like on the tree), it was time for boarding and then heading over to our tiny little plane. Bad news: Our flight was delayed so we had to wait for a while in the little gate area. Good news: Our flight was delayed and my dear Paola was online so I got to chat with her on gmail while waiting in the little gate area. Yay! That was great, because we don't get to talk to each other as much as we'd like, but we did get to have a lovely conversation to finish the year on a positive note. 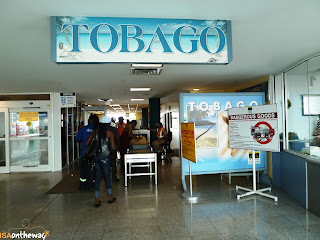 Tobago has its own check-in, departures and arrivals sections at Piarco. 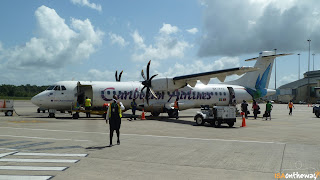 The teeny tiny baby plane that took us on the incredibly long journey of 20min over to Tobago.

When we arrived I called our CS host Ravi who then came to pick us up from the airport with another CSer, José. They took us to Ravi's house where another friend of his was already waiting. Why? Because Ravi had to get some work done and wasn't going to be at home and they didn't want us to get bored, so his friend Navin took Don and myself to a nice hotel where he knows people and we had drinks at a poolside bar and walked around the waterfront. How thoughtful are those people? Extremely. 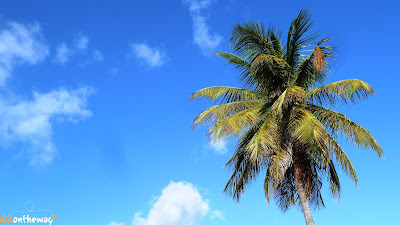 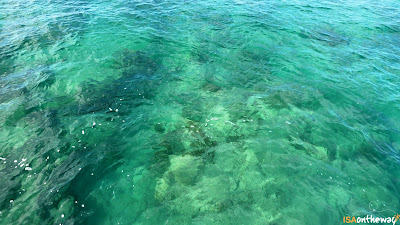 Will you look at the colour and clarity of the water?! Don't you tell me you don't want to jump straight in there.

While chilling at the hotel bar another CS friend of mine came along: Kevonne, from Arima. She happened to be in Tobago at the same time and came to meet us right after arriving. We had been in touch before the trip, because we wanted to meet up while we were over there and maybe even spend Old Year's Night (you don't say New Year's Eve in TT...) together, but we hadn't been able to make it to a meetup in Port of Spain, because we had both been busy on and around Christmas.

Around 6PM or so we went to get a little bit of food because it was going to be a long time until dinner that night and Don and I hadn't eaten since our not-Semmel-breakfast that morning. Afterwards, Kevonne went to her guesthouse to change while Navin took Don and me to his place and then we all met up again to head back to Ravi's, who was by then on his way back home.

I don't remember at what time we arrived there, but I went almost straight to sleep. The days before had been stressful for me emotionally and I was extremely tired. Right now I'm not sure how much I've mentioned this on the blog, but I don't really sleep much/well. I'll be up for ages and sleep between 4 and 6 hours a night and then after a while comes a day where I crash. Unfortunately, in that cycle, the crash day was the 31st of December. Oops.

Here's the thing. Kevonne and I had been trying for the longest time to find a nice party or event for New Year's Eve Old Year's Night, but in the end we stayed at home. Well, Ravi's home. He had a lime at his house, with BBQ and friends and he was a really generous host and invited us to celebrate the big night with them. And on top of that he let me bring Kevonne along as well, even though he'd never met her before and I basically just showed up at the house with her in tow.

So while everybody got ready for the party,I went to take a nap, only I couldn't sleep then either, but at least I got to lay still and quiet for a while and my body could thus regain some of its strength, even if my brain couldn't. Yes, you may laugh at that. Tired after a certain point is like drunk, so it was definitely comical.

I got back up at 11PM and headed outside to the front of the house where everybody was already in full lime mode: Ravi, Don and Kevonne, Navin, the neighbours Lindon and Zinga, José and some other people. 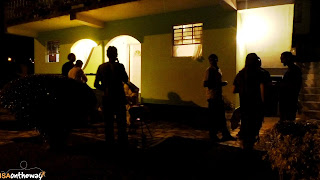 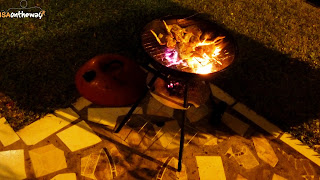 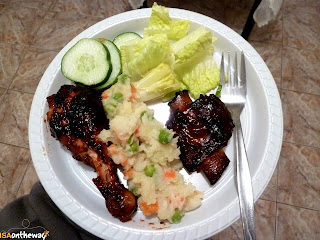 Delicious BBQ chicken and ribs with fresh salad, all prepared by super-chef Ravi, and an incredible potato salad made by Lindon.

It was a really nice party, even though I didn't get to experience much of it. On top of it being the switch from 2012 to 2013 it was also Zinga's birthday so there was a double reason to celebrate. Everybody sang, everybody did the countdown, everybody toasted to the new year and then at 1PM I had to go back to sleep. Yes, I'm an old lady.

But despite the fact that I was extremely tired, I had a very good time. 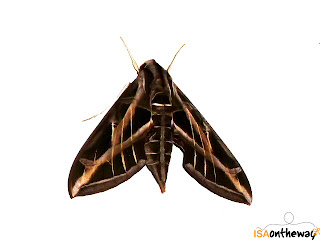 This guy came and sat next to the house door for two days, according to Ravi and Lindon that's a good omen. So, obviously, 2013 will be a good year. At least for Ravi, because it was his front door!

Now, I know that this blog update is coming very late. I'm sorry for that. I had no working internet connection in Tobago and when I came back I came down with the flu and then something happened and for the longest time I didn't feel up to writing, because I simply wasn't feeling positive. I'm better now, which is why I'm writing, but I'm also very busy now. Lots of projects going on, which I will also tell you about in time. For now, I want to tell you as much as possible about Tobago so that we have the old stories out of the way when the Carnival stories start. And that's tomorrow.

Posted by isaontheway at 4:11 PM