I can now post pictures, so I can show you where it is that I live at the moment. Only, I can't. I can show you pictures of that cute little guesthouse and I can show you my place in Cascade - the one I loved so much. But I'm not there anymore. I'm in St. James now, freshly moved this very afternoon. And because I'm all new here, I don't yet have any pictures of the place.

But I want to at least show you where I was before and whenever I get a few nice pictures of my new room and maybe of the house, I'll show you that too.

First, there's my room in The Little Inn. I already told you about the place and how I came to stay there, but I really also want to show you the room, because I enjoyed staying there - deep down, in the moments where I was able to forget about the circumstances. 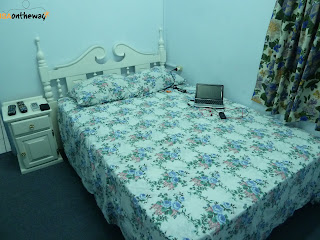 Super comfy bed and big enough to house bedroom and office... yes, I just said that. Come on. You'd do the same if you could. 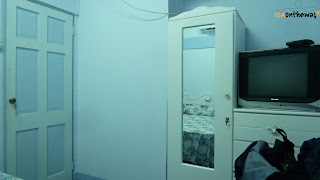 TV, wardrobe, mirror and to the bottom right, just outside the picture frame, a little table with two chairs. Pretty nice there. 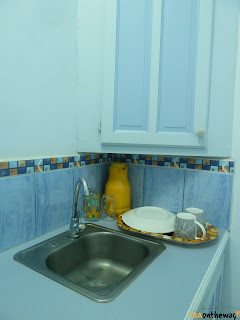 Aside from a bathroom, the place even had a little kitchen. Complete with fridge and kettle. Felt at home for the three days I was there.

But my real first home in Trinidad was definitely Gillian's house. That beautiful little place in Cascade - though the word 'little' only applies if you describe the outside of the house, because on the inside it's very, very spacious.

But I've already told you about that house too, so I'll do the same as for the last and just show you some pictures. 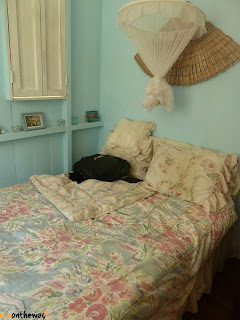 Workspace. And sleepspace, of course. 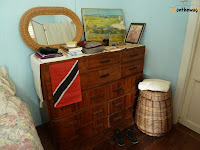 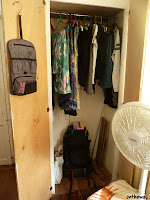 Staying there a bit over two weeks, it was possible to really unpack and make myself at home. 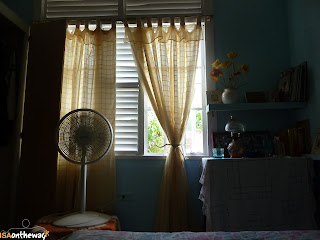 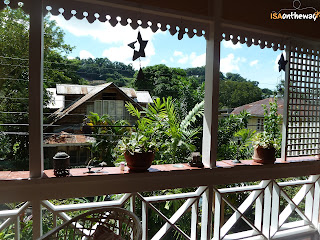 See, I told you. Cascade is beautiful!!!

I really think I'll miss that other place, at least sometimes. Because I like Gillian and Lasse and the kids and I like that they often ahd people over and the house was almost never empty and I liked being in an area that I knew and feeling 'in place'.

I'll miss the other place, BUT I also really like this house that I just moved into. It's a cool house. Bernie, the owner and everybody's landlord is a fun guy, a total character. And the people who live here are very pleasant. Bernie himself, Richard and his son whose name I don't know how to spell, a venezuelan girl, Aruna, who I haven't met yet (but I'm told she's likeable) and two dominicans: Freddie and Andrés. Right now I'm sitting at the kitchen table, surrounded by guys who are all working - either painting the outside of the house or cooking. Yes, the men in this house cook. So I won't. Take that, traditional gender roles!

These little dots signify a break in the writing. Why? Because I just had dinner. A proper dinner! A fresh, hot, cooked meal! Haven't had that in quite a while. Freddie cooked for everyone and he also made a delicious juice - corn. Never had that before? Me neither. Find the idea gross? Me too. But it's not, it's really good! Now I have to go do something simple, like watch a movie. Because now I'm stuffed like I haven't been in days. Or weeks, even. I'll keep writing these days, there's so much I still want to tell you.

Posted by isaontheway at 7:21 PM