To beach or not to beach... that should not be the question!

Since I got back to Trinidad, I've gone to Maracas Beach twice. Definitely not enough times, but also definitely better than not at all, so I'm happy with it. The first time, I went with my friend Fletch, a fellow Trini CSer, his guest Ivo and a surfer from Germany who they'd met partying, I think. Yes, me and three guys. Oh boy... The second time, I went with Fletch and Ivo, again, and Fletch's housemate Anthony and my surfer, Nadav from New York. Yes, me and four guys... I know... it's getting a little weird now. But it's not my fault no other girls wanted to go to the beach! It was fun anyways, though I could have done without all the constant references to balls (not billiard).

No, right, as I just said, I'm not complaining.

The first time we went, it was a gorgeous day. It was sunny, but not too bright, as a few clouds were blocking the light and we could enjoy the day without having to run for the shade or hiding behind sunglasses. Often, the sun over here can be pretty strong and you can practically feel your skin burning, even if you're only exposed for a few minutes. Not that day, that day was great for sitting outside.

Fletch and Ivo came to pick me up in the morning and then we went to Maraval to pick up the German dude and from there we went to Maracas. Or, rather, we tried. There was a lot of traffic on the road so it took us a while, and we also stopped at a HiLo Express on the way to get something to drink. I was really looking forward to my first Shake and Bark of the new season and hadn't yet eaten anything that day, so therefore I was, of course, getting grumpier by the second. But, thankfully, HiLo sells Hershey's milkshakes so I was fine 5min later.

There was, however, another reason for my mood not to be the best that morning... something terrible had happened. I broke a fingernail. Well, I didn't. Fletch's car did. It's all his car's fault. Or his mom's car, really, as it was only borrowed. But no matter whose it was, it was all the car's fault. 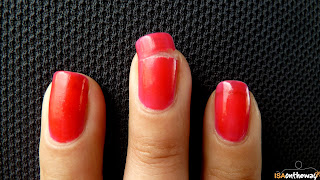 No, that's just kidding. That didn't really bother me for more than about 3 minutes, then it turned into a pretty dumb running gag that lasted way longer than it should have - me telling the car that everything was its fault every time anything happened and Fletch telling me to make sure I didn't break a nail every time I picked something up, opened or closed something or even touched something. Yay for not being funny! (...so much that it actually gets funny again.)

On the way to Maracas Bay, we stopped by the panorama lookout on the mountainside road so that our guests could see the beautiful view of the northern coast of the island. It amazes me every time I pass there, no matter how often I've already been there and no matter what the weather is like...

I love this view.

I've never before paid much attention to what's sold at these stalls/huts, because it looked like just sweets from afar and I figured they'd probably be too sugary and sweet for me to enjoy them, like most of what's sold in the street in South America. This time, though, Fletch showed the other guys what they were selling and so I learned it too: CHOW!!!

Chow is spicy fruit. There's mango chow, pineapple chow (my personal favourite) and many others, even cucumber chow. They chop up the fruit and basically marinade it in a mix of cilantro, lime or lemon, salt and garlic, sometimes also other herbs, and lots of pepper. See, pepper in Trinidad isn't your regular black pepper that you buy ground or grind fresh to put on your food as seasoning. No. Pepper is hot sauce. Very, very HOT sauce!

The mango one is made with unripe mangos (in Colombia that would be mango biche) and that mixed with the fact that the fruit is drowned in the spicy hotness that is chado beni (the name of that marinade type thing) means that the original flavour of the mango is almost undetectable - I can eat mango chow despite the fact that I hate hate hate mangos! But my favourite is still pineapple, because the sweet and sour of the fruit itself is added into the explosion of flavour. I'd tried chow once before at a party in Cascade, this August, but I only found it "OK" back then, because that was with ripe mangos. This time, my mind was definitely blown. 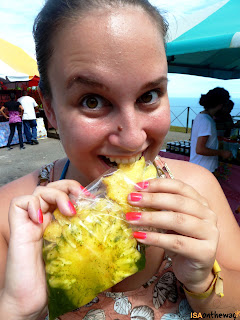 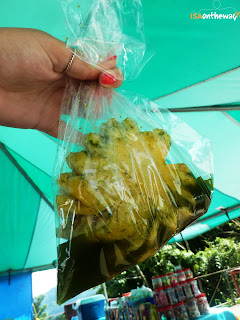 After the short stop by the lookout and getting some chow for everyone, we got back in the car and drove the rest of the way down to the Bay. When we arrived, it was honestly all I could do not to just jump out of the car and run straight over to Richard's to get my shark. It was very difficult, but I did manage to wait for everyone, even though I'd been looking forward to having my first shark of the New Trini Era (because I live here now, I'm more than a visitor this time) since the day I arrived, all the way back in November!

Then, the glorious moment finally arrived. 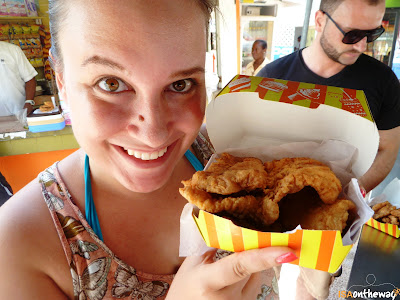 Then, after enjoying the food and feeling the shark power spread through our bodies as it filled us with new energy and bliss, we headed over to the beach and got ready to dive into the water. Or, well, most of us did. Ivo immediately lay down to take a nap and relax, planning on going in the water later but never actually doing it - the shark affects us all in different ways, I guess. German guy, Fletch and I, however, did get in the water right after all of them had taken their look-mom-I'm-at-the-beach pictures. Here is mine: 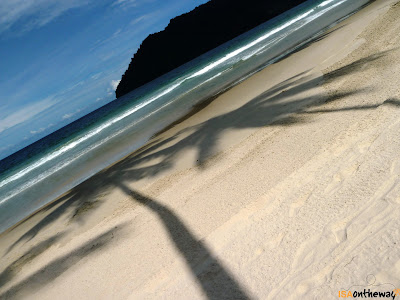 There were strong currents that day and the beach was full of red flags where you had to make sure you were in the water between them and not right in front of them, because they marked exactly where the pull was strongest. Also, there was a lot of wind and the waves were pretty high. Therefore, we didn't stay in the water very long, although it was still refreshing and revitalizing - as my dear sea always is.

We were really lucky with the weather too, as I've mentioned above. The next time, not so much.

Four days later, I went to Maracas Beach again. This time, we weren't as lucky with the weather. We got chow, we got shark and then we got rain. Dangit. No swimming. It wouldn't usually be a problem, because swimming in the rain is actually pretty great, but we all had stuff and so it just wasn't practical to stay. We'd already seen that it was very cloudy and that the likelihood of encountering rainy weather once we got to Maracas was very high, but that didn't stop us. It was just rain, that didn't mean we couldn't go to the beach! Because when asked the question "To beach or not to beach?" the answer is always "To beach!!". Even if you don't go in the water, even if you don't lie in the sand, even if you don't stay as long as you otherwise would.

Instead, we went back to town and up to Fort George, where I'd never been before. The "fort" itself is really just a pretty basic little wooden house, painted white, on top of a mountain/hill (what you'd call it probably depends on where you're from). It was built to defend Port of Spain against attacks back in the 19th century (I think, might have been the 18th), but there never wa an attack so it was never used as the fort it had been built to be. So much for its exciting history. But the view over Port of Spain and Chaguaramas is absolutely spectacular. That's why I'll stop writing now and instead show you some pictures of just that, the view:

Ladies and gentlemen, I present to you my new temporary home: Port of Spain. 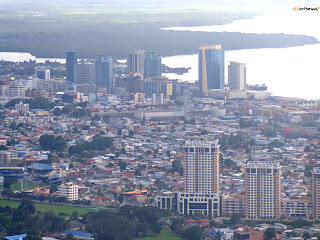 By the group of tall buildings, that's downtown. 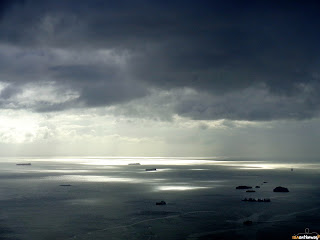 Somewhere behind all those clouds there's Venezuela.

Two days planned as beach days, with two different outcomes, but both totally awesome. Gotta be crazy about CouchSurfing, without the local CS community, life here would not be the same. At all.

I love you, all my CS friends.

And I love you, Trinidad!

And of course I also still love you, Colombia. 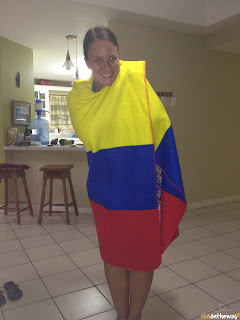 All the Fort George pictures were taken with Nadav's camera, who was so kind as to let me use his when I didn't have mine with me. Thank you!

Posted by isaontheway at 6:22 PM