About a week ago, I went on a spontaneous adventure. Very spontaneous, very adventurous, completely nuts. But loads of fun. So here we go, here's what happened.

I was going to hang out with CS friends one evening when one of them, Michael, asked if I wanted to come along out to Toco, in the far top right corner of Trinidad. Another CSer, Robert, his dad has a house out there and the plan was to go there and kind of camp for the night, as the house is basically abandonded and there's nut much there.

I said "sure". Then I said "what have I done?!". I never go camping. You've read the stories on this blog, the closest I ever get to camping is when we go to The Island in Colombia and we stay at Ana Rosa's cabins instead of the Cocoliso. Still, I wanted to hang out with people, do something I don't usually do and get closer to my personal limits. Leave the comfort zone and just see how far I can go.

I didn't have to go very far, because it really wasn't like camping and even though we were out in the jungley woods of Trinidad there were no crazy wild animals or loads of insects or anything. It was just fun and I saw a lot of new things, an experience for which I am grateful.

First, Michael picked me up from my house and then we went and picked up another CSer, Sophie from Australia, in Maraval and then all of us went to Robert's place close by UWI. On the way out, we also picked up Michael's sister Mari. When we got there, Michael's surfers and Robert were already waiting for us. All in all the group consisted of: Robert, Michael and Mari, Marco Che, Luisa and Paula, Sophie and me. We all got ready and loaded pillows and blankets and some food and ourselves into Robert's van and started out. Here's why I said it was completely nuts: when we left Robert's place, it was after midnight.

You go to the other side of the island in the middle of the night to camp in an abandoned house and then just drive back the next day? Who does that?!

The first stop that counted (because getting a portion of fried chicken doesn't) was by a beach that I don't know the name of, on the top eastern coast of the island. When we got there it was somewhere between 3 and 4AM. Two hours, right? The beach was incredibly beautiful, though. Not so much because of the sand and water or the little fisherboats that were rocking on the waves a few metres from the shore, but because of the sky above. There were few houses and few streetlights out there so once you looked up you saw such an inmense amount of stars... and there were no clouds that night! That first look upwards just took my breath away.

From there we went somewhere else where Robert wanted to show us all something and for that we got to try out the car's cross-country driving abilities. Which are impressive, by the way.

It was an extremely bumpy ride and then suddenly we stopped on what seemed to be a little peninsula (I really don't know where it was or what it was, because it was completely and utterly dark aside from our not very powerful sources of light and all the fireflies) and the idea was to go out to the edge and take pictures there, in the dark. A picture was taken by where we left the car, but the light used to illuminate all of us was pointed directly into my face and I look really weird with my face all lit up and my eyes shut, in the middle of a bunch of happy smiling people, so I'm not going to make any effort to get that picture from Robert. You're welcome.

We all used whatever lights we had - flashlights, headlamps, phones - to illuminate the way out to the edge of the little peninsula and we all climbed over rocks and up and down mini-cliffs and I did that part barefoot, which was cool. Yes, guess who was the only person there in flip-flops. Me! Well, what am I to do, I don't have any proper shoes. But I enjoy being barefoot a lot, so it's fine. And this also wasn't the first time I had to sort of "brave the wilderness" in flip-flops or barefoot, I do that kind of stupid thing all the time. Just like getting in a car with people and drive out to random places and run around in the darkness and then come back the next day without ever finding out where it was I've been (Just to make sure my body will never be found, right?). I do that. And guess what, I like it.

So, back to the pictures. There are no pictures. We got out to where Robert had wanted to take us, but we saw strange boats down in the water and suddenly it was all "lights out, get back to the car, lights out, be quick" and we had to rush back to the car and then from there rush back to the real road. The only problem here, because we couldn't turn the lights back on (it seems there was a chance those boats were linked to drug trafficking, I don't really know, it all happened so fast) we had to stumble back to the car in the complete dark. I was not wearing glasses. I honestly had no idea where I was stepping and was just following voices through a world of vague outlines and blurred silhouettes. That moment was not much fun to me, but everything before and after made up for it.

We did make it back to the car OK, but the next adventure was just waiting around the corner.

That road was pretty wet in some parts so, of course, water got into the motor and the car stopped in the middle of the road and wouldn't start again. We got to push it! And I actually do mean got to and not had to and you have to read this in an excited voice, not a sarcastic one. It was such a comical thing to be out there in the middle of the night (5:18AM), all of us pushing the car while Robert tried to get the motor running again. Comical, because on the way out we'd been joking that this would happen on the way back in. Thanks for listening to our conversation and making it happen, Murphy, you rock! (Again, no sarcasm.)

Here's a really shitty picture I took of our surroundings. 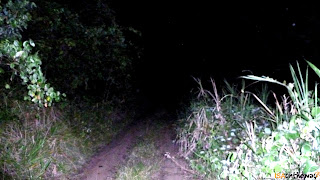 Told you, it was dark.

Thankfully, we had rum and beer and it didn't take the motor long to start back up so we could continue our journey.

From there, it wasn't a long way to the house anymore. We left the car by the roadside and from there walked through the woods to get to the house and - surprise! - my feet got very dirty again. So while everybody else set up the mattress camp, I had to wait outside for water to wash my feet with. Unfortunately, that meant that when I got back upstairs I only found a little space at the very edge of our rough camp and so I had to lie half on a mat and half on the ground and I couldn't cover all of me in blankets which resulted in about 5 million sandfly bites on my right arm and leg. Dear mosquito net, thanks for nothing... 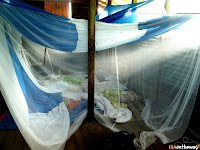 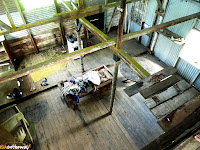 The camp and the downstairs.

Nobody really slept much, apart from Robert who was exhausted from driving, and I didn't sleep at all, but we still all got to rest for a little bit before starting out again and making our way back down. 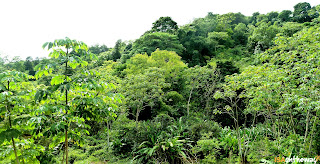 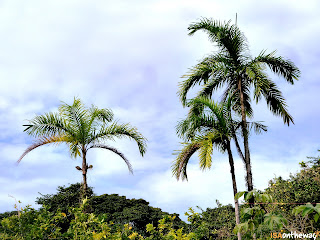 I can't really continue with the words "The next morning..." because everything kind of was that morning, having started our adventure after midnight, so I'll just call it the second half. 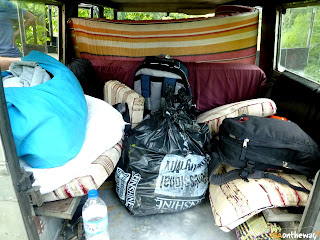 The space Sophie, Mari and I shared with cushions, mattresses, blankets, our bags and sacks of produce.

For the second half, there was a bit of tension in the air, from many sides. A few people were lightly bored (or so it seemed), others really needed to get to Port of Spain for work-related reasons (Michael and myself). So the mood in the car wasn't that great during the second half. But there was no changing the plan, apparently, so we all just hung in there and tried to make the best of it, swallowing the stress and trying to smile as much as possible.

Our first stop was the house of one of Robert's acquaintances where we used the functioning kitchen to make some really good (Trinidadian!) coffee. Boy, that coffee was good. Like, seriously good! I need to buy some of that before I leave the country so the time until I come back here is more bearable. Or, maybe I'll have another cup of it before I go buy it by the bulk. After all, maybe it just seemed so incredible because it was sorely needed... I'll check. 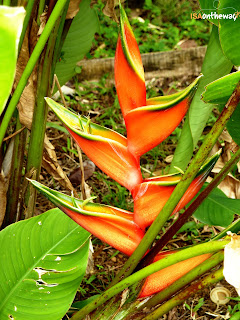 There was a whole bush of these by the house where we had coffee.

Stop number two was actually a beach. Some people got in the water, some people just walked around and took a few pictures (that'd be me, pictures below), Robert took another nap because all that driving and the lack of proper sleep really was getting to him. 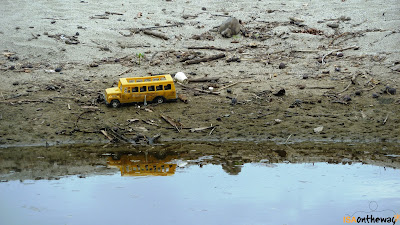 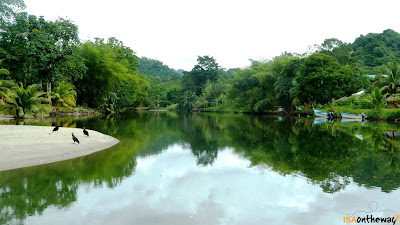 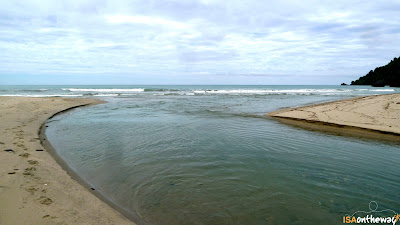 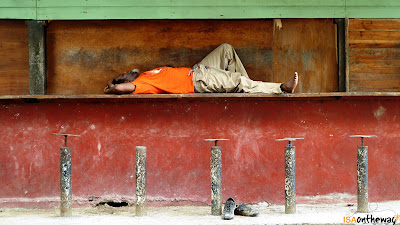 Stop number three was somewhere close by that river-hits-sea beach area, where we stopped to get food. Chicken and salad, which was very good. I hadn't realized I was hungry until I saw the first people come out of the place with their lunch - then I had to go get some too. The original menu was chicken with rice and lentils (I think) and salad, but I got them to just give me chicken and salad, and lots of it, all fresh and green.

Strengthened, we continued our journey - first, right back the way we'd come because Robert had left his shoes at the beach. So happy to find out I'm not the only person who would do such a thing!

Then we actually started driving back towards Port of Spain and even though we hit traffic on the way we made it back to the city by around 5PM. Six hours later than I'd thought it would be when I decided whether or not to join the trip. That was the reason I couldn't enjoy the daytime part of Sunday, thinking of work and what was waiting for me when I got home had my thoughts reeling and my stomach churning and me in general just on the edge. Everything worked out in the end, I could get my task done when we made it back to Port of Spain; had I known that before then the whole day would have been different. But the way it was I don't think I was very good company for everybody and for that I'm sorry. I did apologize, I can only hope I didn't affect the quality of their weekend too much.

Stress aside, it was a trip I wouldn't want to have missed. I'd never been to Toco before, at least not knowingly, and I tasted Trinidadian coffee for the first time and then there was the narcs-in-boats adventure and the car-is-stuck-let's-push adventure and washing my feet in a river and climbing around in the forest and spending fun times with cool CSers.

I hope more things like this happen in the future.

When I'm off work.

Posted by isaontheway at 5:04 PM