Are you just sooo excited to find out what else went on? You're not? Shut up!

Aaanyways, I'm actually a little bit confused about this post and the last one. Because according to the pictures I went to the movies with my friend Nella before the second time I went to Hosay. But in my head, I went before the first time. I'm going to trust my head and confuse you: here's to illogical part-chronological orders!

So Friday, before going to Hosay I went to see Breaking Dawn Part 2 with my friend Nella and her friend Takisha. I don't like the Twilight movies, I actually find them all stupid - but yes, I have seen every single one. Why? Who knows? Who cares?! Nobody, that's right. The thing is, Nella really likes the Twilight movies and I thought it would be nice to spend some time with my friend doing something she likes. Which is why when she posted that she wanted to go see that movie, my first reaction was to comment: Let's go see it together!

Guess what, I had fun! No, of course not because of the movie (Somebody asked me if I had anything positive to say about the film, my response: The images during the opening credits were pretty nice.). It's just really interesting to go to the movies in Trinidad. I've never seen anything like it ever before. People don't just watch the movies. They... engage.

There was shouting and screaming... I mean... man!... People actually got up off their seats and jumped around! There was applauding and gasping and then more screaming and shouting. I'd never experienced anything like it before. But let me just tell you, I'm already looking forward to going to the movies again. I really have to find out if this happens during any kind of movie or just Twilight... I mean, nobody would do that during a really quiet and thought-provoking movie, would they? If I find out I'll be sure to let you know.

Really, though, all I know and all I care about is that Nella liked the movie and I had fun spending time with my friend. That's all that matters.

After the movie, we went to St. James, where a bunch of friends were already enjoying the Hosay festivities. But when we got there, Michael (you know who he is, he's the guy that takes way better pictures than me) went off to take Gillian and the kids home, because they were tired, so the three of us went to a bar in the meantime to have a drink while we waited. 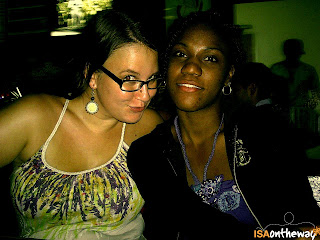 At the bar on the Main Road. Pic by Takisha, taken on Nella's camera.

Now after the movie and the drinks and some Hosay-watching, the girls were tired so they left to go home as soon Michael got back. Although, now that I think about it again, it really makes more sense that this would be Friday. So the girls left and then we saw what's in yesterday's pictures. And now we're jumping over to Saturday for the next pictures. Saturday was very different, because I didn't do anything before Hosay and it actually started later and also, nobody else went, none of my other friends. So Michael picked me up from Gillian's place that night, after I'd already slept for a while. And here's where the chronological order comes back in. I think I slept before going to Hosay, because I was tired and needed a nap because of being at Hosay until like 2 or 3AM the night before. That would make sense, wouldn't it? Man, I am confused...

OK, so Saturday's Hosay. That was the night of the dancing moons. If you read the Hosay info in the link I posted in the previous entry, then you'll know what that is. If you haven't here's the short version: Hosay commemorates something that has to do with the death of two brothers, who are now represented by two half-moons, a red one and a green one. They're carried on the shoulders of a man, though it's a different man every minute or so, because those things are big and extremely heavy. And they make them dance.

Michael took many pictures of both of them, but now I definitely know that I didn't, so I'm only posting one. I don't want to take advantage too badly of him being so nice and letting me use his pictures. 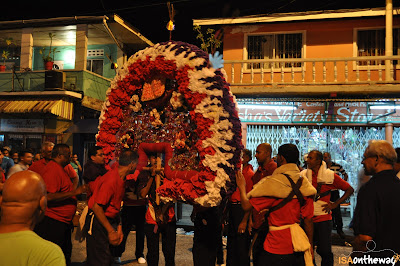 Here they'd just switched from one carrier to the next. Picture by Michael Morales.

This night of the dancing moons was also a night of a very bright real moon, what a beautiful coincidence. It wasn't full, but crescent, and inmensely luminous. 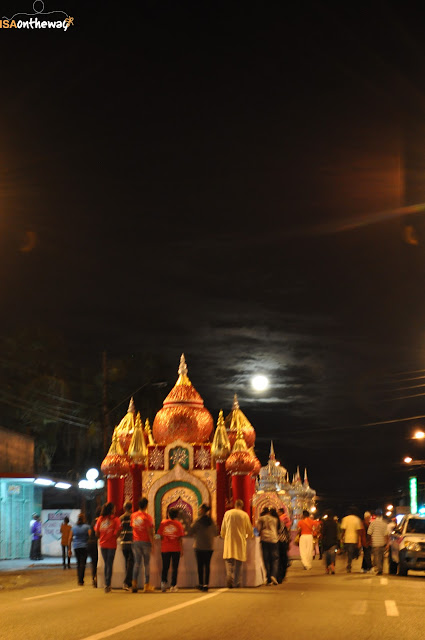 No flags, big mausoleums. I have no clue who took this picture, though I really wish it was me... but it probably wasn't.

This time we actually stayed out until the yards started going home and the night (in terms of Hosay) was officially over. The night before we'd gone home sooner, because Michael's mom and sister were there and wanted to go home. Now I know for sure that the next part is true, as in the next part really happened now, after Hosay Night Two.

When we left St. James to go home - me to Cascade and Michael to St. Joseph - it was around 3AM. He was giving me a ride back as well as there, because I wouldn't have known for the life of me how to get home at that hour. He was going to spend the next day at Gillian's house so they could work on their project, but had to pick up his laptop from his house first. So we both went there and the plan was: drive to St. Joseph, get the laptop, drive back to Cascade, sleep. Yeah, I bet you can already imagine what's next... that did not happen.

We did get to St. Joseph, but the drive took longer because we were involved in a little accident (got rear-ended at a red light by a tipsy guy who was also on the way home from Hosay - but nobody got hurt, don't worry) and when we finally made it to the house, we were exhausted. Me being exhausted wouldn't have mattered, but Michael had to drive, so the plan was changed to sleep first, drive back later.

Everyone involved in this is a CouchSurfer, so please don't worry about me going home with strangers. You know CouchSurfers are trustworthy people.

His house is outside the town, up on the mountainside, retreated, far from everything and everybody else. No, I'm not going to tell you where exactly it is, what are you thinking? He doesn't want a stalker either. But I will tell and show you why I love that house so much (in case I haven't said that yet, I really love his house).

First, you know how much I love the rain (I say love a lot... hm.); if you don't know me in person, then at least you might have seen this. I hope you have. Then you'll know why this picture makes my heart skip a beat: 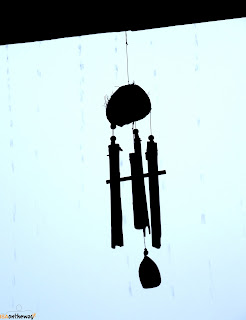 This is important, because it's what makes the next part ever more special. Now, there are many beds in Michael's house, but one of them is out on the deck that overlooks the valley. So not only did I get to sleep out in the open (though still under a roof) and listen to the raindrops on the roof right above me and see them fall all around me and all through the valley and over the mountains, I also go to wake up to the following view: 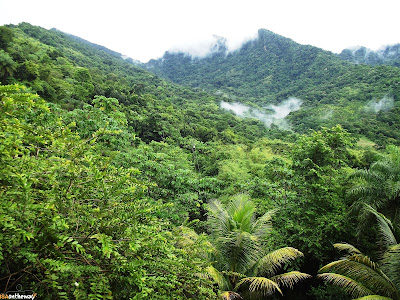 And apart from that - the rain, the quiet, the beautiful view -, it was cool. Cold, even. Cold enough that I woke up at one point and had to go inside to find Michael, wake him up and ask for a blanket. So worth it, though! And you know that I hate the heat ridiculously much for somebody who moved to the Caribbean of their own free will, so I actually enjoyed the shivering and then the wrapping myself in a blanket. Glory, that's all I can say about that part.

On top of everything, because the house is so far away from everything, I wasn't woken by any cars or other city noises. No, this little guy woke me up: 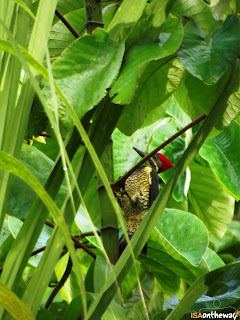 Woody, is that you?

As soon as Michael felt ready, we drove back to Port of Spain and went to Gillian's house. I started working on the computer again, everybody else concentrated on their project, but I felt really good despite being back at work. Like, inside. Yes, I don't like being completely alone, we've established that. But I'm also not very good at being around people all the time. I'm very used to living alone, in an apartment by myself. So, despite the fact that I enjoyed staying at Gillian's and I enjoy staying here in the house in St. James, I need some time off once in a while. I don't have to be completely alone, mind you, but being in a space that's quiet and tranquil and not talking to anyone for a bit... it recharges my batteries. My soul batteries, that is.

Michael's house did that for me. Well, no. Michael did that for me. He took me with him and allowed me to hang out for a while and even said I could come back. The idea alone that I'll be able to sit on that deck again and look out over the valley and listen to the rain and watch the clouds... the idea alone slows my heartbeat down when I feel stressed or anxious or tired. I'm extremely grateful for that. More than I can say.

I'll leave you for now on this quiet note. I still have more things to tell you and more pictures to show you, because Hosay wasn't the only cool thing that I saw in the last weeks. But the memory of those beautiful quiet moments has made me want to lean back and listen to some music. Just me.

Thank you, Michael, for allowing me to be a little quiet in your home.
And thank you for reading.

Posted by isaontheway at 9:01 PM