Recently, there was a big festival going on: Hosay. It's a religious and cultural celebration of the muslim part of Trinidad's people and the big parades are held in St James, because this area has a large Indian population. I went to two of the parades that happened in the evening/at night during this year's celebration, on November 23rd and 24th.

It was extremely interesting!

I've been to places before where you had a great mixture and mashup of different cultures, like Suriname and Guyana. Those places have so many different influences, it's like you're in two or even three continents at once. The example for Suriname: geographically you're in South America/the Caribbean, linguistically you're in Europe (Dutch, English,...) and when you look around you and you see all the mosques and hindu temples next to the churches (which also belong to like 50 different branches of christianity) and then you go into a supermarket (every single one of which is chinese) and then you eat something - suddenly you're all over Asia! It's really crazy and every day is so full of new impressions that it's difficult to take it all in - that's the reason I haven't dedicated an entire blog entry to this topic, even though I've been meaning to. But Hosay, this little festival of the Indian and muslim community in Trinidad, was my first encounter with a real "meeting of the worlds" manifesting itself in a big, loud way, culturally. You know, in a way where you can finally put your finger on it and say "this is it!". And you can really wrap your brain around it. Of course, the mix is everywhere. All the time. Omnipresent, if you will, in all of these countries I'm mentioning here, and others as well. But, again, experiencing Hosay took it to a whole new level of understanding.

Here's why (and don't think this is a joke, this actually is what made it all graspable for me): 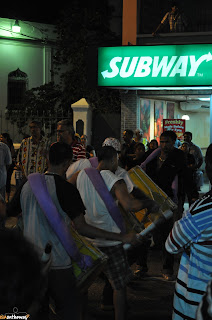 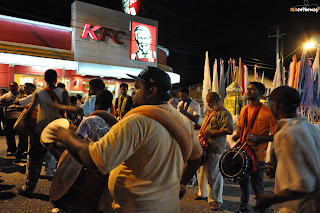 This might sound stupid to you, but - for me - Subway and KFC are restaurant chains that just plain represent Trinidad, because everybody here eats KFC (100%) and Subway (to a lesser degree). All the time. I hardly ever eat at either of those two, but here I do. Here, I even like them. At least Subway. So these two pictures show you what I mean when I say the mix is more obvious: two veeeery "trini" things in the background and in the foreground Trinidadian Indians drumming their souls out in a muslim festival. I don't know about you, but I found that eye-opening, for want of a better word. How do I put this..? I see either of those two "restaurants" and I know I'm in Trinidad. I hear chutney or eat curry, it makes me think of the Indian culture. But seeing this, just the way you see it in the picture, put the two things into one frame. And it kind of made me see, almost for the first time, that aspect of the country, or rather that that was an aspect of the country.

I still don't know if I'm making myself clear... You know how you can know that "the first of July is a Wednesday" and you can know that "today is the first of July" without realizing that "today is Wednesday"? That's what happened, suddenly I knew that it was the Wednesday, the 1st of July. Please don't comment below that I'm wrong and it's actually Saturday, the 8th of December. All I'll do is tell you to: Shut up!!

If you've clicked on the link above you now know what Hosay is about and how it's celebrated, so you won't be confused when I tell you: The drums were hypnotizing! They were my favourite part of everything I saw, more than the tadjahs or the dancing moons. 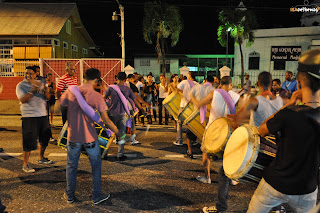 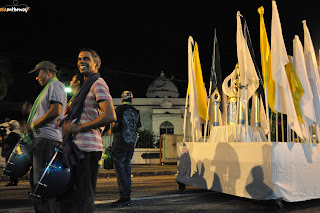 I love this picture, perfect composition! This one is definitely by Michael Morales.

Tadjahs. These are the kind of picure I'd take, but I can't say for sure. That probably means they're also by Michael Morales. 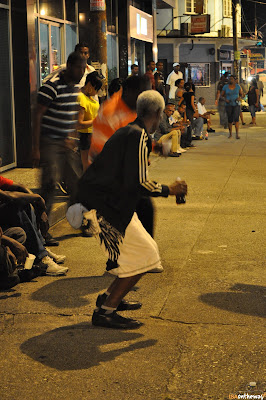 That man was there just dancing to the drums, enjoying the night. I took this picture, I remember it as if it had been last month... 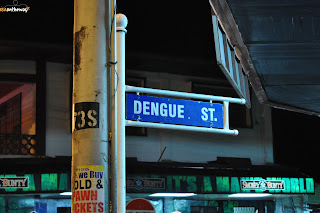 There are five Hosay yards here, each with its own tadjahs and drummers, so we could walk around and listen to one group and then to another and then to another... They were all playing the same kind of music, but speed of rhythm and melody and, obviously, skill levels varied from group to group. So we chose which ones we liked best and then switched back and forth between those two. I'm a huge fan of And if you felt like giving yourself an overload of drumming, you could stand right between two groups where you'd hear them both equally loud and let the music become noise and wash over you until you had to take five steps in either direction or you'd go crazy. Fun!

But I don't want to overload you, so I'll put the pictures from the second night into a separate post. And don't you miss it, it has the dancing moons!!


Also, a huge Thank You So Much to Michael, who not only let me wander off with his professional camera, but is also so kind as to let me use some of his pictures on this blog, because I can't remember which ones are his and which ones are mine (apart from the last two..).

Posted by isaontheway at 6:11 PM