Since I got to TT, I've finally been able to become more active on CouchSurfing again. After months, if not years, of almost silence and rarely hosting or even attending CS events, I'm now back in the game.

That means sending messages to people who will come to Port of Spain and offering them help and information, trying to host people whenever I receive a couch request and Bernie allows me to accept it and let that person stay in my room for a few nights, and posting in all sorts of threads in the Trinidad and Tobago group: our local forum.

And another thing is organizing meetings and events: parties and limes.

The first such event I organized here was the 121212BBQ, a lime on the Savannah where everybody who attended brought something to eat and/or drink and we just hung out, had some food and drinks togethere and celebrated the fact that it was the last repetitive date in our lifetime. Because the next time there will be a date like 7/7/7 (the first CS Vienna Stammtisch), 11/11/11 (200 years of Independence for Cartagena and the most epic beginning of carneval ever at 11:11 on 11/11/11) or, like just now, 12/12/12, etc... well that will be in 2101, when we see the next 1/1/1.

Of course, there are dates like 2/2/22, but deep down we'll know that those don't count, because we're just fooling ourselves by ignoring the zeros.

So, obviously, that called for a celebration! And according to Pernell, another trini CSer, the fact that I think so means that I'm becoming a trini myself - which is a good thing!

Unfortunately, the 12th was a Wednesday and it had rained in the afternoon, so not too many people showed up, but there were around 20 people there so I'd say it was a success. Pernell brought his big grill and some meat and fish, I brought two fresh quiches I'd made for the occasion that same afternoon and some soft drinks, Nku brought rum and others also brought more food and more drinks, including more rum and beer. All in all, we were set for a nice BBQ in the park with locals, visitors and good vibes. 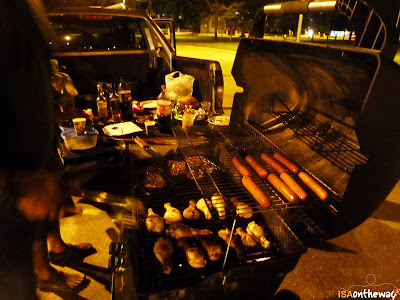 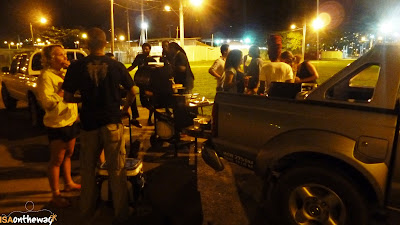 Today was the second event I organized. Well, yesterday, because it's way after midnight already. I actually started writing about this before the second event, some time in the early afternoon, but things got in the way - strange things!

See, the second event was an End Of The World Lime, because according to everyone on the interwebs, the world was supposed to end on December 21st 2012 - yesterday (today)!

Of course, that too was a reason to get people together and have a few drinks, so I posted in the Trinidad and Tobago group again and created another CS event for the occasion and we all started counting down to our last day on Earth (not) and the last CouchSurfing lime (definitely not). Here's why today was crazy after all: In the middle of the day, the lights went out. Completely. All of a sudden, there was a huge blackout that left St. James, Maraval, Woodbrook and other parts of Port of Spain completely without electricity. For a second there, when everything grew really quiet with the energy being gone and before a car drove by to make the world noisy again, it felt like the end was really happening. That was when I realized I spend way too big a portion of my life online.

Funnily, I'd seen lots of pictures online (on 9gag and tumblr and Facebook) where people said the power companies should shut down for around 10 minutes on the 21st just to freak everybody out and I thought TNTech had seen one of those posts and thought "This is funny, let's do that!" - unfortunately, that was not what was happening. The electricity was out for waaay longer than ten minutes. It was hours - long and hot and uncomfortable and boring hours - before the lights came back and when they finally did, around 8.30/9PM it was almost too late to go out already. And what made that whole experience even crazier was that some of the neighbouring houses (four or five on our block) had had electricity already for a few hours while we were still sitting in the hot dark (no fans... no fans!). That felt like a big in-your-face by the universe, but the good thing was that in the end, we were saved. As in, the fans work again!

The lime was set to start at 8PM and people had been calling and texting since before that to find out if it was happening even though the power was out, only I had no idea where the affected areas were until I spoke to a CouchSurfer who was already at Brooklyn Bar, where we wanted to meet, and said that it was dark but still full of people. I couldn't inform anybody, though, because I didn't have all the phone numbers and I couldn't post any updates on CS without internet access. That sucked, because I didn't want anybody stranded and I really felt responsible, being the organizer and all that.

In the end, although I'd already given up on the idea of going out and had actually already fallen asleep, my friend Andrew came to pick me up and while he was at the house waiting for me to get ready, the lights came back on - after I had taken a shower in the dark. Thank you, timing.

At least we didn't have to sit in 100% darkness. Boy, am I glad I bought those Skittles scented candles two weeks ago! (Yes, really.)

So we texted around then and called a few people whose numbers we had and found out who was going anyways and then we headed out to go straight down to the Avenue to get food and then up to Brooklyn Bar to meet everyone and even though the group was small it was great after all! Yay!

It was a crazy day and night, so I made the colours all crazy to fit the circumstances.

See, CouchSurfing is pure win and CouchSurfers are all made of awesome. No light? Who cares, we go out and party anyways. I'm already looking forward to organizing more events and seeing lots of amazing people there!

With all this liming and actually being able to organize events I feel like I'm really becoming part of the local community, I really live here now. It's wonderful.

Posted by isaontheway at 1:32 AM