The evening before we didn't stay out late, because I needed Saturday to pack and get ready and work-hard-on-not-freaking-out-completely and finish part of a translation and Béa also had a translation project that she had to finish that day. So we actually woke up fresh as daisies (four hours later than usually) and with a lot of energy (for the first two hours of the day). Kordula came by the apartment a bit before 10AM so we could walk to Mila together and she wouldn't have to find her own way. Silvana was supposed to come, too, but she cancelled in the morning saying she was unwell.

So we headed over to our favourite place in all of Cartagena when it comes to breakfast or dessert and we had just that: breakfast and dessert. Or rather, we had breakfast there and then Béa and I got something for dessert later.

The best thing, in the middle of breakfast, all of a sudden Silvana did show up! She'd wanted to be a surprise the night before, like Álvaro, and as that hadn't worked out, she decided she'd be a surprise in the morning. She wasn't unwell at all, she just wanted me believing she wouldn't be there. What a cute kid, right? I love all of my friends, I certainly have the best ones there are. 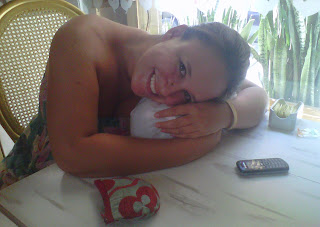 This picture looks weird, I know. I actually had to reassemble all the bones in my back, neck and arms to be able to hug the box like that, but it was worth it. My last Mila pastry of 2012. Happy face!!!

After almost two hours at Mila, we all left, because it was getting late for those of us who had to work and pack and work. So we walked back to the house with Kordula and Silvana and then said good-bye to the two of them, to Silvana until February and to Kordula until later. And I want to repeat what I said here, so you guys have it in writing and don't forget:

When Béa and I got home, she started working and I started packing. My plan to work-hard-on-not-freaking-out-completely didn't succeed fully, I did freak out a little bit. As in, running around in circles almost crying over not being able to find a t-shirt. But I am most certainly not going to tell you any more details of that, believe me, you don't want to know. That would be a whole new kind of TMI that you do not want to get into. Trust me.

I finished packing, or as-good-as finished it. Couldn't finish 100%, because it was Saturday and I didn't leave until Sunday, but I got far enough that I'd be able to work properly and use my mind on other things aside from my backpack.

Then, the real farewell-party started. At least, that's what it felt like for me.

You can see what a loser I am on Facebook, nobody likes my status updates. ::foreveralone::

In the evening, I asked Kordula if she wanted to go to a free comedy show and she said yes. So we went to the Éxito together, where I had to do some last-minute shopping for my move. She had a blast while I zig-zagged through the supermarket, trying to find the things I'd written on my little list. And I never write shopping lists anymore! Had to, because I'd get to item number four and already not know what item number one was.

When the shopping was done, we took a taxi to my Bellavista, because I wanted to show Kordula what had originally made me want to keep coming back to Cartagena and stay there. The reason I first fell in love with the city, the people who I still count as my family cartagenera, even though I hardly saw them in the last months that I was there.

Having dinner there together and chatting with Adriana, Monique and Enrique I felt finally ready for my trip. Kind of. Not really. But, you know, they closed the circle of friends and family that I wanted/had to see before leaving.

The translating continued until late at night and the next morning Béa and I had Mila breakfast again, though not really, we just ate our desserts that we'd brought home the day before. But still, in a sense that was the real mila'st breakfast.

Posted by isaontheway at 9:56 AM