Today is Cartagena's Independence Day, but I'm going to tell you about the part of the festivities that happened Thursday, because I'm not in Cartagena anymore and thus couldn't participate in the craziness that must be going on there right now. I'm already in Florida, had to come up here to catch a flight back down - to Trinidad. That's happening tomorrow. Now, I'm at Nico's house, remember him from the last island post?

So my good friend and former university colleague Kordula came to visit me in Cartagena before I left and on Thursday there was the first big bando, where reinas from all over the country parade along the Avenida Santander and there's loud music and tons of people. So in order to be able to show her what the costa is all about (no comments about how that's not really all, I know that, I'm just saying...) I picked her up from her hostel in the evening and we headed over to the muralla to hang out with a friend of mine and his friends.

The pictures you're about to see here are not from the evening per sé, because I'm not crazy enough to take my camera out into the street on a night like that. They're from the afternoon, taken from our various balconies. We were actually both supposed to be working, but there was so much noise (LOUD NOISES!!!) that we couldn't even hear our own thoughts so there was nothing left to do but watch the happenings from the safety of the apartment. 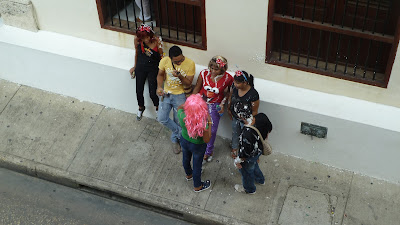 People gathering before heading into the crowd. Yes, they're dressed up and yes, they're full of foam. 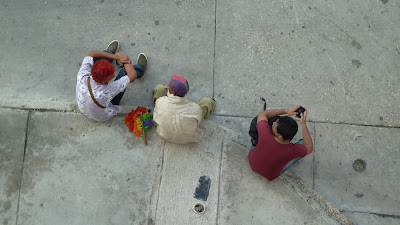 Waiting for the fun to start. 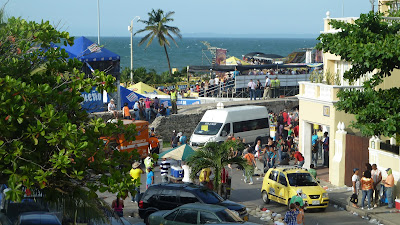 The main tribune of the parade is right in front of the apartment door, it was loud and crowded (it got a lot fuller later). 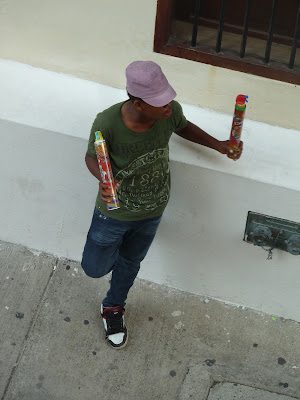 When it was time to go out to pick up Kordula, I actually had to call my friend Juan Pablo because I was scared to go outside by myself. It was so extremely full of people (and I'm just really bad with crowds) that I wasn't sure I'd make it all the way to her hostel by myself. And the other thing, the more important thing, was that people were throwing buscapies. Those are firecrackers that people light and then throw on the ground and they'll flail around and explode one after the other and it looks like they're chasing your feet to explode against them, which is why they're called buscapies - foot seekers. I am incredibly scared of those things, because I've actually had a big firecracker explode against my foot once, somebody threw it at me without thinking. Scarring experience - only figuratively, lucky me.

He came to pick me up and together we went to pick up Kordula and, guess what, our faces were full of foam as soon as we'd gotten about 30 steps from the house. Strangers will spray you, especially if you look like you don't want to be sprayed. So the best thing to do is put on some clothes you don't care too much about and embrace the madness. We did that.

See, the thing is that foam isn't the only thing they'll throw/spray in your face: there's also maizena (corn starch) and azulín (some weird blue coloured powder you can use for dyeing) and some weird red liquid that will leave your clothes and skin coloured for days if you don't have strong enough soap. Yay..?

After picking up my friend, we spent a while by the city wall drinking aguardiente and listening to music and annoying about 70 police officers who had chosen the spot where we were hanging out for their meet-and-regroup. During the fiestas de noviembre there's more petty criminality in the centre, because with all the crowds it's so easy to pickpocket. That's why there's a lot of police about the centre, trying to make sure no situation will escalate. I don't want to go into detail here, though, and I'm also not going to talk about what I think of all that, because this blog is supposed to be fun and I don't feel like big political discussions. I'll just leave you with this little gem: apparently it's not a good idea to go offering aguardiente to police officers, or at least that's the reason Juan Pablo and his friends gave me when I asked why they wouldn't let me.

When the first magnum bottle of aguardiente was empty, we all got into a few taxis and headed out to the barrio Pie de la Popa to listen to more music and even dance a bit by some bar/bakery/street corner. More fun there, but then Kordula started feeling her headache (a lot of traveling in the previous days) and I started getting tired (working and noise and dancing...) so I got another taxi for the two of us and took her home.

I walked back home from the hostel, which is located at about 5min from the house, and was extremely glad to see that the crowds had already dispersed completely and I had nothing to worry about. As in, I didn't have to be aware of possible buscapies-attacks.

Fun night, definitely. But I'm glad I'm not in the middle of the fiestas anymore! 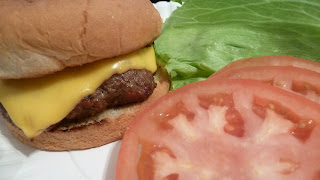 Nico's roommate Luke is a grill-master - and I helped, I cut the tomatoes.