Friday was the day I started meeting my rolo friends, the ones I'd actually come for. Not that meeting Andrés wasn't great, I told you it was, but it wasn't programmed because I hadn't even known he was in the city until I got here myself. So, officially scheduled friend-meeting-activities started Friday with meeting Leo and Anaskas. That's not the same Leo as the one from the other post, I have two Leos. Both are awesome people, you'll meet (see) the other one soon.

This Leo is also from 2008, though. One of the people I met when I came to Bogotá for the first time. We met through CouchSurfing; I was staying with somebody else, but we met a few times. Back then he also introduced me to Anaskas, who he'd just started dating a little before I got to the city. Now, those two are married. Married! That is so great, I'm incredibly happy for them.

We met at the Jiménez Transmilenio (from now on referred to as TM, all this typing is making me tired...) station and walked around for a bit, in search of a nice place where Leo and I could have coffee and Anaskas could have lunch, because she'd come straight from work and was hungry. We ended up at Crepes and Waffles, which meant ice cream instead of coffee. A good thing, definitely. See, in Cartagena we sometimes go to Crepes, but I never have ice cream there. It's too hot for ice cream in Cartagena, so I hardly ever have any. But whenever I go to Bogotá or other, similarly cool places ice cream is a fixed point on the menu. 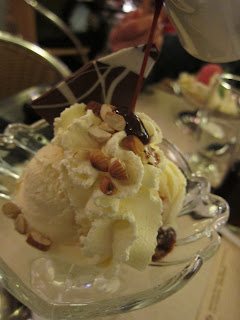 Vanilla ice cream, whipped cream and chopped almonds with a little thing of hot chocolate that you can pour over it... sooooo good!

After lunch/dessert, we walked to the Banrep Museo de Arte to see a photography exhibition by a German artist. It was interesting enough, but in the end I think we were all glad the admission was free, because we'd expected rather more of it. Most of the picture could have been by anyone, really. As in, they weren't impressive at all. Actually, most of the looked like the kind of picture my photographer-friends would delete when sorting through the results of a session. There was only one picture that was really striking and worth seeing. I guess that's why there's so much controversy about the definition of art. But still, it was an interesting cultural thing to do on a random afternoon in Bogotá. 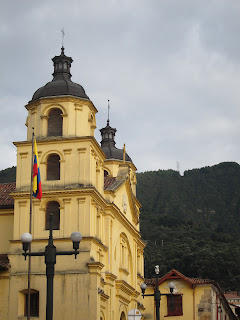 Looking up towards the mountains from Museo Botero.

After that, we kept walking some more, mainly along the Séptima, which is now a pedestrian zone and makes for a pretty nice let's-go-for-a-little-walk area. The weather was also as nice as the day before, very pro-walk, and it has been like this the whole time I've been here - lucky me. Although I might have jinxed it with typing this, the sky was bright blue all morning and now, all of sudden, there's a thick layer of clouds over the city... oops. 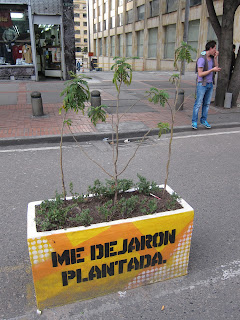 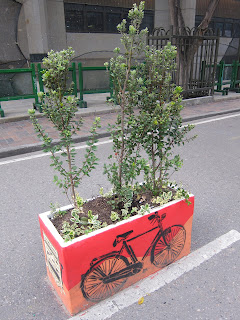 Decorated plant holders all along the Séptima. Some very funny, others targeted at citizens' conscience.

That evening I was supposed to go to a Halloween party, so we said good-bye when we got to the TM stop at Museo del Oro. It was already 5.15PM and I had to go home, change and get back into the city by 6PM. No way, that was going to happen, but I still had to try. 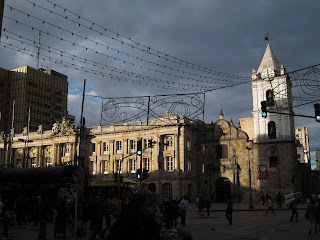 I love the light in this city... 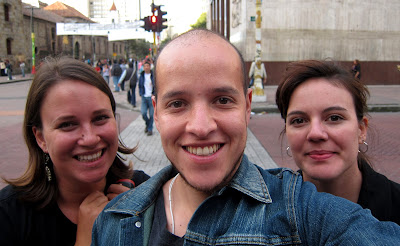 This is called selflessness. They look great while I look like a huge dork, but I still chose this picture. Nice, right?

When I got back to Jhonnatan's, I was already really, really tired. Friday is a weekday, after all, which means that I'd been up since 5AM and not being used to the altitude of this city doesn't make you less tired, but more. The plan then changed from going right back towards the centre (after changing) and visiting that party to sleeping a few hours and meeting the party-people at some place in the area around La 85 (lots of bars and clubs in that area), when they headed out from the host's house to another location. But... that didn't happen.

I never got those few hours of sleep, instead Jhonnatan had some friends over and I hung out with them. Waterpipe and aguardiente, a nice mix! In the end, that was perfect for the evening, because I wouldn't have been a lot of fun at a party, being tired and all that. But staying at home with fun people, listening to music and smoking hookah and playing drinking games - that was allright, especially because Jhonnatan's friends were all really nice and a lot of fun. And respectful - the most important thing - nobody played annoyed or tried to make me drink when I said I'd only do half shots, no full ones. Nice. 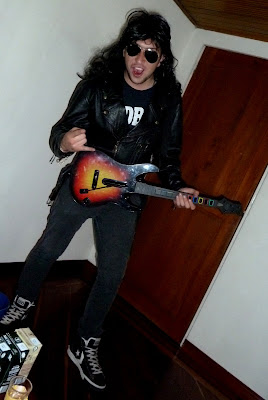 Because of Halloween, Alejandro came dressed as a rockstar. 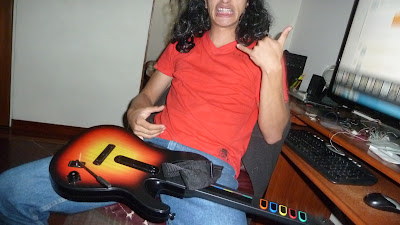 All the guys (there were 5 of them) took turns wearing the wig, but Jhonnatan definitely looked coolest. You can't really tell right here, but despite the fact that I missed his face, this picture is still awesome. 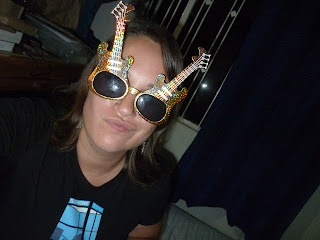 Around 11PM or midnight or somewhere around that time, I really don't know, the guys and Jhonnatan's girlfriend, who had arrived in the meantime, decided to go to a bar in the area. Originally, I was going with them, but along the way I forced myself to face the truth: I was waaaaay to tired to go anywhere but to bed. So go to bed I did, only I couldn't sleep right away. I spent an hour or so watching YouTube videos and reading and I think that was what decided my physical condition the next morning. See, I hadn't been drunk, but there was still a possibility of a hangover. I spent a while awake without drinking and loud music and also opened the window in my room to air myself out after all the smoke from the waterpipe (my hair smelled like red apple and cappucchino, not actually bad) and because of that I woke up the next morning guayabo-free. Or not because of that, who knows. Who cares?

The only thing that counts is that I had a great Friday and was ready for an even greater Saturday.