Bogotá Day Five was only a half-day, but it was also a SUCCESS. Got up at 5.30AM, because I couldn't even open my eyes at 5 - all Ricardo's fault of course, for giving me coffee at 9PM. Read for ages before I was finally tired enough to go to sleep, oops.

About 3,5hrs later Jhonnatan was up too, so we got to chat a little bit before I had to leave. I had booked a flight that left Bogotá at 10.25PM and arrived in Cartagena around midnight, but I didn't really want to get home that late, because I wouldn't be at the apartment until 1PM and then myself as well as Béa would have trouble getting up again in the morning, not something desirable. So I checked the other flights LAN had for the day and saw that there was one at 2.35PM and another one a bit after 7PM and both still had seats available. So I decided to go see if they could put me on the first flight instead of leave me on the last one.

I had a few things to do in the city, so I took care of that and then took a taxi to the airport - I felt too lazy to go by TM, which had been the first plan. And I was lucky, because the taxi turned out to be a lot cheaper than I'd expected it to be and the driver was also really nice and made funny comments about the traffic the whole way out to El Dorado.

When I got there I went straight to the LAN office and put on my sweetest smile and BAM! it worked. The lady at the desk put me on the waiting list for the earlier flight and told me to just go to the check-in counter at 1PM. So I walked over to El Corral and had me a nice burger. We do have El Corral in Cartagena, but I still associate the place with Bogotá so I went anyways. And then something happened. Something that hadn't happened in a long time (probably because that only happens in Bogotá (oh, that city...)): I got notes with consecutive serial numbers!! This is extra special, because I've never gotten five in a row before, only two, three or four.

After my little lunch I went to the LAN check-in and promptly got a seat. And then I had it changed, because it was a middle seat. Right, it's not enough to get on the flight I want, I also need to get my favourite seat: window. But the guy was nice about it and just laughed when I apologized for being so terribly ungrateful and demanding. He didn't have the possibility to get me a window right away, so he gave me the exito row (Éxito!) where I'd at least have tons of space.

Before going to my gate, though, I just had to get another Oma coffee. Oma is my favourite coffee. Seriously, I love Oma coffee. Coffeecoffeecoffee!!! 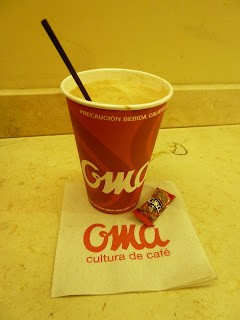 Got the large one, because it'll be the last one for a while...

Now jump ahead to being on the plane. I said I'd gotten an exit row seat, right? 13C. That wasn't enough for me, though. When boarding was complete I switched instead to 12B. But wait, didn't I just say I didn't like middle seats? Well, this was no ordinary middle seat. Because it was one of two central rows that were next to the emergency exit, this one only had two seats on each side. There was no seat right by the window, which turned my B into an A. Hellsyeah. So I ended up having a crazy load of space all around me, two windows to look out of and I even got more coffee, because that's how LAN rolls. 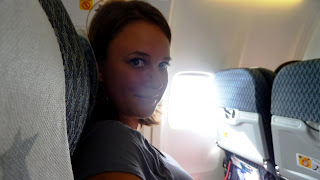 When we landed, my bag hadn't arrived. Apparently, they changed me to the earlier flight, but still left my luggage to come in with the later one. Oh no? No. I asked if it was possible that they'd bring it in the morning, even if it arrived at night (yes, they bring it home to you), but nobody ever called to confirm that they'd found the bag - not yesterday evening and not this morning. And then, just as I was about to call them to ask what had happened, the doorbell rang and my bag was here. Just like that! They didn't bother with a call and instead just brought the bag over right away, remembering that I'd said the morning was OK. Thank you, LAN, you're very nice, I like you.

I left out a tiny little detail now, though, didn't I? Yes, the ear explosion... See, I do love the cool bogotano weather, I really do. And I enjoy it very much. But that doesn't mean that my body doesn't react to the sudden change in temperature and humidity. To make a long story short, I got sick. It was still OK in Bogotá, as I was simply too busy to let the flu do anything to me. I'd sometimes feel feverish, but that's ignorable. But the flight, or rather the pressure changes during the flight, made it impossible to ignore that something was going on. My ears weren't able to neutralize that pressure normally, because of the flu, and they closed up more and more with each minute. Pain ensued, naturally, until we landed and it became bearable again. But, unfortunately, they still haven't opened again completely. So I'm now half-deaf. But on the positive side, this post's title is a lie - they didn't explode!

Also, it's totally fine to be sick for a little bit now. After five days of pure and undiluted awesome, there has to be a little negativity, otherwise we'd upset the fragile balance of the universe. And then who knows what kinds of horrible things would happen to all of us. I basically just saved all of mankind with my acceptance of this flu. You can thank me later.

Now off to take more flu pills and not listen to music. Because I can't.

Posted by isaontheway at 8:04 PM