Cartagena and Cali in Bogotá


Sunday was going to be a quiet day. Of course, obviously, naturally,... it just had to end up like all the others - crazy.

It started out calm enough, with lunch in a shopping centre with Álvaro. Yup, that's the Álvaro from Cartagena. He happened to be in the city for a big conference, which was held around the same dates that I myself had traveled there for. What a nice little coincidence.

We met at the Centro Comercial Andino at 1PM and walked over to the Centro Comercial Atlantis to have lunch there, because they have a good food court. Aren't all food courts in shopping centres the same? No, apparently not. The big difference here was that Álvaro knew they had KFC at Atlantis and that's what he wanted. I got myself some meat from La Ponderosa, because we were both on the prowl for things we wouldn't be able to get in Cartagena. 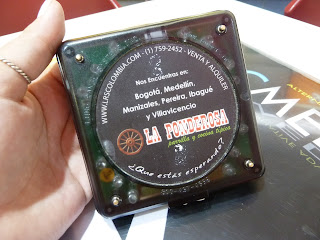 The pager confirms it, no Ponderosa in Cartagena. 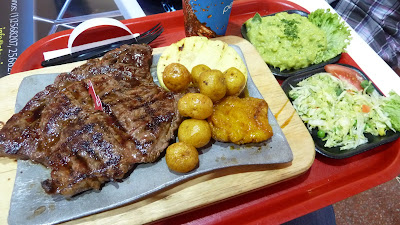 It was pretty good. And no, of course I didn't finish that...

After lunch I was supposed to meet Leo, not this one - this one. But when I called him to confirm hour and place, he told me that he and his girlfriend were just getting ready for lunch themselves and that he'd call me back after so we could meet a little later. No problem, though. That only gave me more time to spend with Álvaro and we made very good use of it - having coffee at Oma. No Oma in Cartagena! 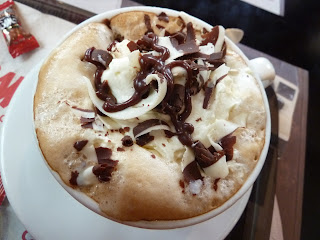 Atlantis, much like Cartagena, only had Juan Valdez so we went back to Andino to have our coffee. Or rather, me to have my coffee and Álvaro to have his vanilla malteada. After that little treat, it was time for both of us to leave. Álvaro had to get his suitcase and head to the airport to fly home, and I was finally ready to take the TM from Héroes to CAD to meet Leo. Well, he was finally ready, I'd been ready for aaages. To get to the bus, we took a shortcut through the Centro Comercial El Retiro. Yes, there are three shopping centres within a block of each other. And all of them surrounded by more stores and bars and cafés in the street. What's the point of that? Don't ask me, I don't understand it either.

Now, on to the next encounter.

Just like Andrés, I hadn't seen Leo since 2008. He was my CS host in Cali back then and he's one of the funniest people I've met, like, ever.

We went to SOFA - Fair for Leisure and Fantasy together with his girlfriend and his brother and his brother's girlfriend. That was ... that was ... interesting. Pretty much what I imagine ComicCon to be like. It was held at Corferias, that's the thing with the huge arch at the entrance. If you find yourself wondering through Bogotá looking for Corferias, just look up and when you see what you see in the following picture, you're there: 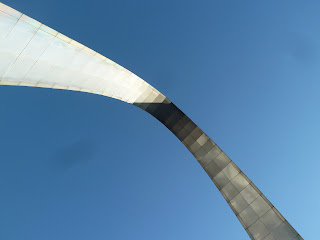 There was a lot going on at that fair and soooo many people, the place was chock-full of people of all ages. OK, so the main group of attendees was between 16 and 25 years old, but there were also older and really old people, and little kids. And like half of them (or probably even more) were in costume. Cosplay, cosplay everywhere!!!

I saw Darth Vaders and Darth Mauls (though not a single Storm Trooper), people dressed up as characters from movies (Harry Potter, all sorts of Disney movies, etc.) and characters from video games (I saw a Mario, a Zelda, there even was a Big Daddy!). But the bulk of costumes were from mangas and animés (which I know nothing about, so forgive me if those words actually mean the same thing or don't properly describe what I saw there... I really have no idea). Almost all of those costumes were really elaborate, though. Very few people, of the ones who were in costume, had just a painted face or just a mask or just an item of clothing. There was make up, there were wigs, there were accessories (swords, axes, guns, bows and arrows, etc.) and, most importantly, most of the costumes themselves were extremely well made. As if they'd taken the original costume designer's work and just put it on themselves. OK, maybe I'm exaggerating now, a little bit. But it really was cool to see.

We spent some time walking around the exhibition halls and browsing through the displays. And watching people play DnD-like games or painting the little figurines for them, swordfighting, skateboarding and doing capoeira, solving Rubik's cubes (the regular ones and some crazy ones with much more sides and colours) in under two minutes,... I can't even remember it all, that's how much there was going on. 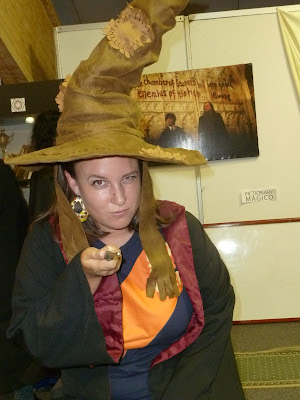 The Sorting Hat, he confirmed that I was Gryffindor. 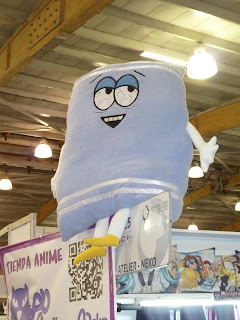 "You wanna get high?" 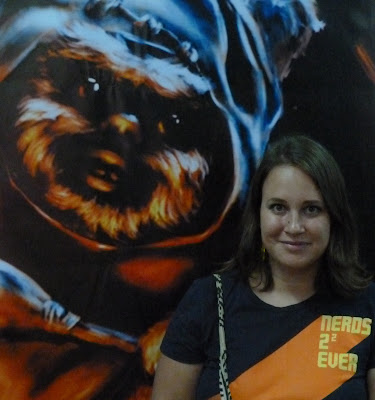 You know how much I love ewoks!!!

I didn't take any pictures with cosplayers, because I felt they were already being pursued by enough people who wanted pictures with them. Not very many of them were professionals either, a lot were just regular attendees who figured that by going in character, they'd have even more fun. Also, I'm really shy and it would have cost me more courage than I had to ask for pictures with anyone. But it's fine, the memories are in my head and they'll stay there for a little while. And when my brains forget, I'll have this blog post to remind me.

When we were all exhausted from all the information intake and tired of people swarming around us constantly (again, the place was freaking packed), we went to get something to eat and drink. The caleños had empanadas vallecaucanas and I had more coffeecoffeecoffee from Oma and a little pastry filled with chicken. After that, it was back to the TM, where Leo was so kind to drop me off so I wouldn't have to walk and find it myself - and probably get lost on the way two or three times. 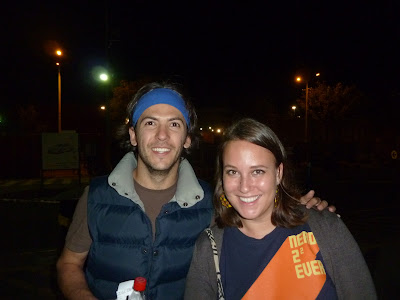 Also, I love that I wore my "NERDS 2² EVER" shirt that day. Not planned at all, but it turned out to be the absolutely perfect shirt for the occasion.

On the way home I decided to give another friend of mine a call, Ricardo a.k.a. Yotas Pelotas. I wanted to know if he'd have time to meet me the next day, Monday a.k.a. the day I went back to Cartagena. But guess what, he had time right away! What I hadn't taken into account, because I had completely forgotten that, was that he lived really close to Portal Norte. I'd never been to his place before, but it's like right there, right by the TM stop. Like where I was staying, but on the opposite side of the Autopista Norte.

He picked me up from the TM stop when I got there and we went to his apartment, where we had coffee (my fourth that day) and chatted for a while, catching up a lot - because we also hadn't seen each other in over a year - and reminiscing a little bit. That's because, like Luis, Ricardo forms part of that group of friends that I know from when I was living in Bogotá for a few months back in 2010, so there's a lot of stories and adventures to remember, because we all used to hang out all the time. Now, not so much. But who knows, maybe there'll be more of that again when I come back to Bogotá in 2013. And because he knows so many people I know, he could also fill me in on what was going on in the lives of those friends I didn't get to meet on this trip. 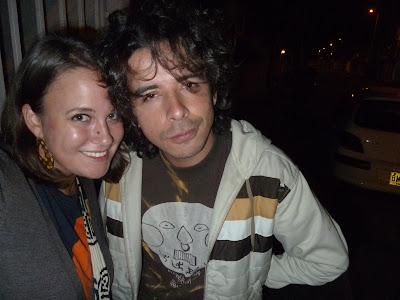 All in all: Bogotá day four - SUCCESS.

Posted by isaontheway at 9:06 AM