Saturday, surprise surprise, was a crazy day. I think I might leave this information out in the future, because all days I spend in Bogotá are completely crazy. In a good way, that's true, but still... crazy!!

Right now I'm already writing from Gate 22 at Aeropuerto Internacional El Dorado, waiting for my flight from Bogotá back home to Cartagena. I was supposed to leave at night, at 10:25PM, that would have gotten me to Cartagena at midnight and then add another good hour until I can make it to bed and tadaaa no way could I get up at 5 or 6AM tomorrow morning. The people of LAN Colombia were very nice, though, and let me change my flight. So I'm sitting here in the early afternoon and my flight leaves at 2:35PM. Very nice, high five.

Aaanyways, back to Saturday. That was two days ago, right? Yeah, because today is Monday. We already established in the last post that I started the day hangover-free, but with all the activities in the day and the YouTube-ing at night I was in full zombie mode all day. Or, actually, all weekend and today. But it's fine, everything still worked out.

Saturday morning took me back to Los Andes, the university I'd been at on Thursday with Jhonnatan and Diana. Again, I went to a class, but this time I had an active part to play and didn't just sit in and watch. I went there to visit my friend Natalia, who I met last year in the Hollywood Beach Hostel. She was there with her sister Renata, who unfortunately I haven't seen since, and we stayed in touch. She's a German teacher and thought it would be fun to bring me into class for her students to interview, so they'd get some practice. For some weird reason I got really nervous answering questions, although there was really nothing to it. After all, I'm a native German speaker and they were only asking me a bit about myself, Austria and my time in Colombia. Once the stagefright was overcome, though, I actually had a lot of fun.

After we had some ice cream (yes, again) at Cascabel - very recommendable, too - and from there went to get a CD that Natalia needed for fixing something on her computer, or something. I'm a tech dummy, I really only understood like 10% of what was going on there. But that's fine, I'm not the one fixing any computers, I'm the one on a friend-visiting-mission and that, at least, was very successful. 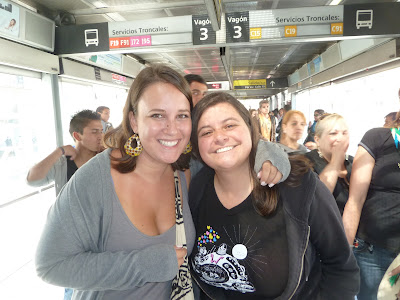 With my dear Natalia, the coolest rocker in Colombia :)

From my rendez-vous with her I went straight South, to visit my poor friend Luis (-ito). Why is he poor? Because he ripped apart his Achilles' tendon playing football and hasn't been able to leave the house properly for like a month. So I got some food for myself and some ice cream for him and went to his house, where we sat and chatted and had tinto (You don't know what tinto is? Go away.) and chatted some more. After a while, around 4 or 5PM some more people came over, Martin with his girlfriend and her cousin and Jhon. I know Martin from 2010, but we only met once or twice and I think Saturday might have been the first time we actually talked, like had a real conversation. Jhon is a friend of most of my friends. Somehow we managed to never ever meet until Saturday, though. Now there's finally a face to that phantom-voice on Facebook. Yay!

It was a really, really fun evening. Everybody was talking about crazy parties we've been to and making plans for future crazy parties and there was beer and more aguardiente (...not for me, though, I had a manzana. Wait, you also don't know manzana? Seriously, just go.) and a lot of laughter. I almost went to an AIESEC Halloween party, but it was already getting late (9PM) so I thought it'd be better to go home. 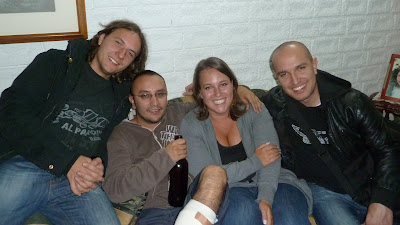 This already concludes Saturday. Jhon and I shared a cab-ride to the TM and then a TM-ride to the North, as he lives by Suba, almost as far as Portal Norte, where I was staying.

All in all I have to say: What a great day!!! This is just exactly what I'd come to Bogotá for, to meet up with as many of my best friends as possible - and there's a lot of them in that city. Much more than in Cartagena. I want that more often. I'll have to make sure to be able to spend more time with that bunch of locos when I come back.

Posted by isaontheway at 3:12 PM