One of the reasons I loved my stay in TT last year are the people we met during out time on the island of Trinidad (I still haven't made it to Tobago, shame on me). And this year, even though it wasn't part of Christian's original plan, we met them all again. Most of them are from or live in Cascade, close to Woodbrook, where we stayed. I just saw that I haven't even mentioned Cascade yet. That surprises me, because it's an awesome place, Cascade. The name alone... Cascade... beautiful, isn't it? Cascade. 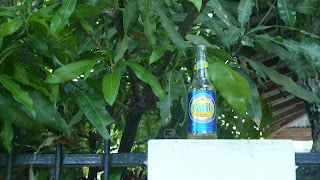 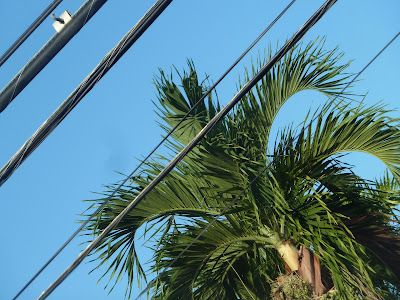 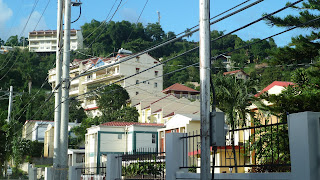 Just one of the views up.

It's a part of Port of Spain and a beautiful one, because it's up on a hill and you get a great view of the city from up there. We were invited to a Reggae Party there last year and this year, we celebrated the Independence Day there. Last year's party was in the afternoon and by seven, everybody was trying to get home, because of the damned curfew. This year, however, by seven the party was just getting started! 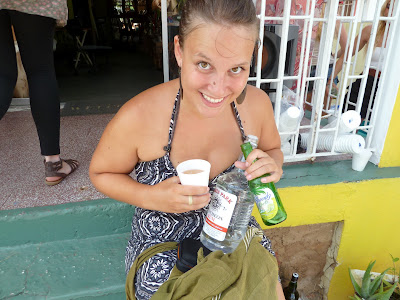 This is from last year. This year, there was no Shandy, so I had to stick to what's in the other bottle. Don't judge me!

No, I'm not posting any pictures from this year. They are all horrible and would show you way too much of my bad side, we can't let that happen.

So, we got to a friend's friend's house at around 4PM and first of all, there was food. Guess what we had? Can you guess? YES!!! Chicken and rice! What a surprise, though, to get chicken and rice in the Caribbean, right? Anyways, it was good. Not as good as last year, when Hasely's mom cooked, but it was still a nice meal.

After a while, everybody moved to the house next door, where they'd set up the music. Only nobody even went inside the house, we all just stayed in front of it with our drinks in our hands and our red-white-black flags waving. If you want to know what it was like, imagine a few rastas and a few Trinis and a handful of awkward europeans dancing like crazy people in the middle of the road. Got a horrible mental image now? You're welcome.

I even got to keep one of the flags to bring with me, now I can represent my favourite island nation wherever I go. This must sound strange, now that I think about it. I do this almost every time I go to a new country, right? Saying how much I love it and that it's the best and that I wish I could stay... at least I've been doing it on this Caribbean trip. But I honestly feel like Trinidad is different from the other places. I know, I said that I would have loved to never leave Puerto Rico and that if I knew I could have a car, I'd move to Hollywood. And that SXM was the most fun I've had in a long time. But Trinidad... Trinidad is something else. Trinidad is my island version of Colombia. That's a pretty big statement.

The thing is, I can really imagine living there for a while, not just a few weeks. Granted, I can also imagine living in the other places where I previously said I could, but there it'd be so much easier. Trinidad and Tobago, I think that's not usually the kind of place that would attract many expats. OK, maybe Tobago because it's big in tourism and a typical Caribbean paradisic island, but not Trinidad. Trinidad just has this special little something, I can't really tell you what it is. I just like it there, a lot. And I have since the first time I visited, it's the real deal, I think.

And there's the aforementioned people. Like Iric, who guided us around the island last year when we couldn't get over to Tobago and who also put himself in charge of our fun and good times this year. Like Andy, who drove us around last year and was also our driver this year, and who is really nice and, in his own way, also very funny. Like Hasely, who hosted last year's party at his house and this year hosted some of the people in our group who found the hotel too expensive. Like Travis, who last year gave me a little Carib towel (that I still carry everywhere because it's so handy in the heat) and a Carib bottle-opener/keychain (that I fastened to my bad so I always have Trinidad with me) and who this year made my stay even more special, by taking me around to see more of Cascade and the area I lived in and just being his kind and funny self. There's no guarantee of course, but I hope that they'll all still be around when I come back, because it wouldn't be the same without them. Especially Travis. And his car.

So, back to the party. Because it was Independence Day and people were allowed outside at night, big fireworks were organized by the city to celebrate the 50th anniversary in an extra glamorous fashion. I don't know when exactly they happened, because I didn't have my phone with me and of course I don't have a watch, but sometime around 10PM, plus/minus thirty minutes, we all got into various cars and went up the hill to see the fireworks over Port of Spain. I took a lot of pictures, but I didn't have a tripod, so the majority of them are extremely blurry. The other ones are just somewhat blurry, but there's one that's blurry in a fun way, so I'll post that one so you can see what I mean when I say "great view over the city". 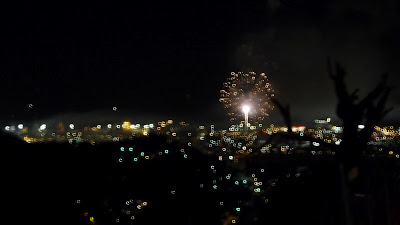 I don't know at what time the party started disintegrating and people started going home. All I know is that I only slept about an hour and a half before having to get up again at 7AM. That party was 99% greatness and 1% horror. And that's because the next day we had to go to university - meeting at 8AM at the bus station by Independence Square, starting lectures at UWI at 10AM and we didn't get back home until like 6PM. By which time I was positively comatose. Worst planning ever, seriously. Who does that? OK, no, I don't get to blame anyone for feeling like somebody put me through a blender or for walking around campus like a zombie. It's not like anybody forced me to stay out until five in the morning. I can't help it, though, no matter how bad the next day felt, it was still 100% worth it and I wouldn't do anything differently given a second chance at handling the day's/night's events.

What's more, that night I went out again! Not for long, I was home before 3AM, but it was still fun. Not as much fun as the night before, but still a lot of fun.

The next morning, yesterday morning, I already had to leave. Andy took Susanne and me to the airport and she went to Tobago and I went to St. Lucia. In this little thing: 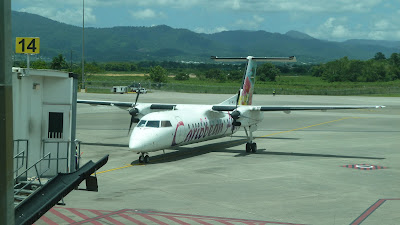 I love these little planes!

So yeah, I'm in Saint Lucia right now. In Rodney Bay, to be exact. Unfortunately, history repeated itself and I got sick. I didn't get sick while still in Trinidad, though, thankfully. It only started the last day, I could feel myself getting sick at the airport. That was weird. I guess Trinidad likes me too and gets upset when I leave and makes me sick because it's angry. Don't worry, Trinidad, I'll be back!

And to you, Saint Lucia: I'll try to get better as quickly as I can so the next days will be better than today and I'll be able to do more than lie around tired and hurting and sniffling all day and just take a walk into the village to find some medicine. But more on that tomorrow, it's almost 8PM now and with every minute that passes it's less embarassing to go to sleep. Good night.

Posted by isaontheway at 8:00 PM