With me having a new temporary home, I actually miss my old temporary home: the Bellavista. This afternoon, for the first time since I got here a few days ago, I felt like I had enough time (and energy) to go visit everyone in Marbella. But just as I was making a mental list of what to bring with me (phone, keys, etc.) we started hearing a strange noise coming from the street in front of the side balconies, so Béa and I got up and went to see what was going on. A photoshoot! They had a generator they used to provide the energy they needed for their big camera-flash-umbrella-thingies (Yeah, sure, like you know the name for everything... shut up!*)  and that was what was making so much noise.

We couldn't really see what kind of ad or campaign they were shooting pictures for, but their model was quite, let's say interesting. 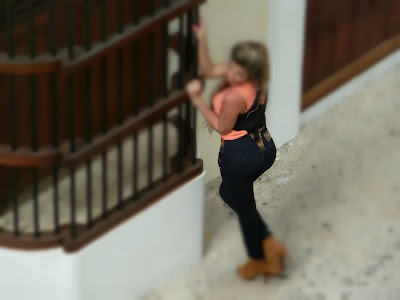 I wonder where she bought that ass. And I also wonder if it's an implant of if she's wearing enhancing/lifting or stuffed panties. Either way, that thing is as fake as the shellfish in a five dollar crabcake.

So that had us distracted for a while and all of a sudden it was extremely windy - there hadn't even been a proper build-up to that wind, it was just suddenly there and blowing leaves along the street and the curtains into our faces. We quickly shut all the windows and not too soon, because it started raining almost immediately. The rain wasn't bad though, it didn't rain much, it was the wind that caused the real trouble.

The week before my arrival, there had been another storm like today's, but even bigger, and half the roof was blown off the building. They were almost done with the repairs now, but during this storm we heard and saw tiles from the roof crashing down onto the street again. Luckily, nobody was hit, neither people nor cars.

Something between twenty and thirty minutes passed and the wind died down again, but then the sky turned an intense yellow, as it always does before a thunderstorm around here. It's really beautiful, actually, unless you've been planning on going out to visit your adopted dysfunctional family at the hotel Bellavista and then have to scratch those plans and hope that you'll be able to go another day. 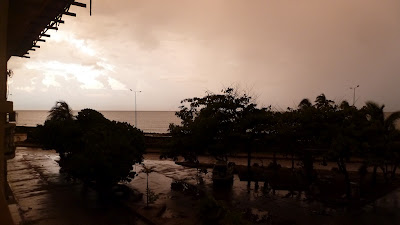 The camera doesn't capture the colour of the sky that well, take this picture and look at it through a glass of apple juice and you'll see what it really looked like.

Soon enough, Cartagena was dancing her thunderstorm choreography again. I know that these storms are highly detrimental for a lot of people in the city, especially in the outer barrios, but I can't help but find them beautiful from where I sit, which is a safe place. And this specific safe place has a big parking lot right in front of it, where Cartagena's storm dance takes on an extra special pattern:

Here are some of the roof tiles on the street. You can't see in this picture how much fell off, but it sounded like a lot. And when the storm was over, a new sound was added to the background noise of Cartagena life: the crunch crunch crunch of cars driving over those bits and pieces of tiles from the roof and plaster and paint that had come off the building's façade. 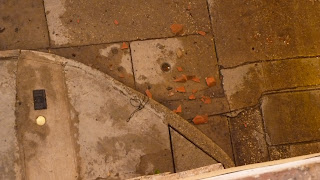 Sorry this is a little blurry.

For people as used to cold or at least more temperate climates as Béa and me, the storm brought a huge relief in terms of temperature, because it cooled off the city that hat been scorching hot for days. Maybe this storm being on its way was the reason it was so unbearably hot and stuffy; at least in Austria you can always tell if there's going to be electrical discharge by the inmense heat preceding the storm, and that feeling of the hot air being pressed downwards, right onto your head.

This is what Google had to say, when we wanted to know how cold our "cold" really was:

That just shows how quickly the human body adapts to new circumstances, like the weather. When 24°C have you jumping around wanting to sing about how cold it is (of course sing, because we like a little cold from time to time), that means you're really living in the Caribbean, not just visiting anymore.

* I haven't told you to shut up in quite a while, got to take up that habit again.

Posted by isaontheway at 9:42 PM