Here I am, in Saint Lucia, sitting on the terrace of the guest house I'm staying at, listening to the Caribbean Super Station and looking out over Rodney Bay and the hills in the centre of the island. It's rather beautiful, if I may say so myself. I'm not trying to get you jealous here, I just want to share my experience with you. Although, of course, if that does get you jealous in the process of sharing, that's not exactly a downside for me...

I've been a bit slow with the blog, to be honest. Yesterday I wrote about last month, which is pretty bad. And even worse than that, I've been in St. Lucia since the day before yesterday and now is the first time I tell you about it. I am truly sorry, I'm trying to stay on top of this, but I have an excuse, OK? Hear me out. I mentioned that I got sick leaving TT, right? Well, I still am. So I got to St. Lucia on the 2nd and that day wasn't so bad, but yesterday I didn't do much apart from take a little walk down to the village to get juice, water and medicine. The rest was lying around, half awake and half sleeping. Today is a little bit better, I still have fever coming in waves, but I went to get more medicine and I got limes so I can drink water with lime juice and I plan on being better tomorrow. So that's the reason I haven't been writing much, because sitting up and holding the laptop and moving my fingers over the keyboard was simply too big an effort. Right now, though, I'm kind of OK so I'm going to tell you about my time in St. Lucia so far.

The island has two airports, one in Vieux Fort in the South and one in Castries. I arrived at the one here in the North, which is the smaller one. That's the reason our plane was so tiny, bigger machines can't land up here. Like in Sint Maarten, the airport is on the shore, but the nearest beach is about 5min driving from there, so the planes here don't actually go right over the bathers. Still a nice way to arrive, though. The airport is the tiniest one I've ever landed at, you walk from the landing strip into the little (seriously, it's little) building and there are two immigration desks, one for nationals and one for visitors. Right behind these two immigration desks is the only baggage belt, which is about 4 or 5 metres long. And right next to the baggage claim there are two customs desks, one for declare and one for no declare. All in one single room. And then from there you walk right onto the street, where the taxis and buses are. And for me, there were also the people from the guest house who had come down to pick me up.

I'm not actually sure, that my guest house really is a guest house, because I'm the only paying guest here. All the other people staying right now are friend of the owners'. But it's still pretty nice. Especially the place itself. It's located on top of the hill by Gros Islet (pronounced grows-ee-lay) in Rodney Bay. That fact leave me with one advantage and one disadvantage, a plus and a minus, so to say. 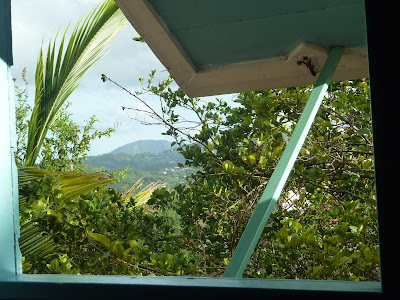 The view from my bedroom window. 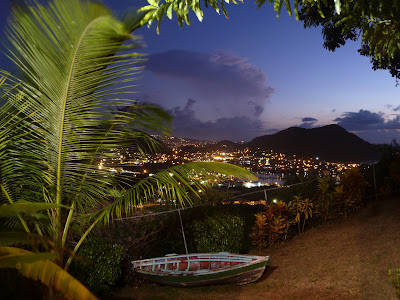 The view from outside my door. No joke, no photoshop. This is what I also see right now, off to my right... with the sun slowly setting over the bay... oh so beautiful... 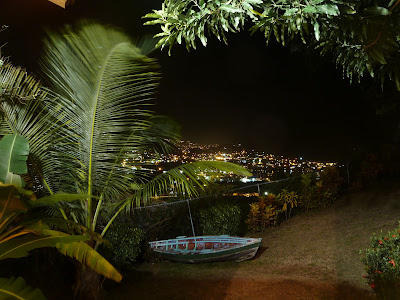 That's some serious plus point there, right? I mean, you don't get a view like that every day. The downside, though, is that, of course, there's a price to pay for a view like that. What price? The walk up. There's buses on this island alright, many of them. But they drop you down in Gros Islet and then you have to come up the hill yourself. And it's steep!!!

It's a nice enough walk, because you also have the view over the bay and the hills and the marina and the town and the village, but it's so steep and the sun beats down on you constantly, oh my, it's exercise alright... 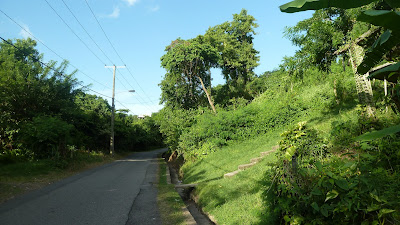 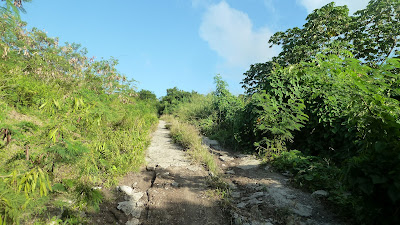 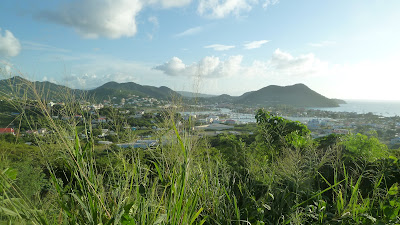 And then there's that view again and you just forget the pain in your knees and the sweat dripping off your face... No, wait, you don't.

My first night was also the first night the owners' Italian friends stayed here, they arrived a few hours after me. The owners are Italians too, that's why I'm here with six of them right now. I could have guessed that much, it is the "Italian Guest House" after all... but it still doesn't feel like a guest house, no matter what they tell me. Anyways, because it was the friends' first night, they'd invited other friends of theirs from the island and organized a dinner party, to which they said I was welcome too. So I ended up having dinner and drinks with six Italians, two St. Lucians, an American and a Czech. It was pretty nice and most of them are sailors and you wouldn't believe all the crazy stories they had to tell, it was so much fun and so interesting! Lucky me, yet another time.

Dinner itself was also really good: First, we had breadfruit balls, a typical creole dish prepared by Colvin, one of the two St. Lucians - and one of the people with the most interesting personal histories I've ever gotten to hear in my life! Wow, that guy was unbelievable! Second, for the main course, one of the Italian guests had made pasta. An Italian made pasta. Cliché!!! But it was good, so we shall pardon them the fulfillment of everyone's most strong prejudice of Italians. 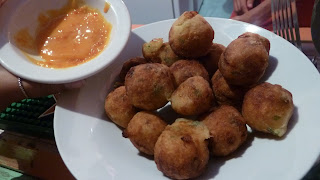 The other evenings since that first night have been more quiet, no more dinner parties. But it's OK, I can use the rest anyways.

Yesterday, as I said, I went to Gros Islet. Today, I got a ride from Alexandro, the owner of this place, and he took me down past the marina to Rodney Bay, where I spent the afternoon. I got some more cold/flu medicine, a few other things I needed and then I went to Rituals, the Starbucks of the Caribbean, and had a coffee while I read for a while in a big comfy chair. Then I took a walk along the peninsula to get to the beach, which was absolutely beautiful. But because I'm still sick I didn't go into the water, I just stuck my feet in. Still a very good feeling. Guess who left her camera in her room and couldn't take a single picture of the marina or the beach!

I took a bus for the first time today, too, to get back to Gros Islet and then - oh yay...- I had to walk up my hill again to get home. And when I got up to the house, Alexandro and his girlfriend were there saying that they'd just arrived - I must have turned off the main road and onto the shortcut right before they passed and we didn't see each other, otherwise they would have picked me up and I wouldn't have had to walk. That's the second time that happens. That hill must love me, if it makes me miss my possible rides all the time. But it's OK, I managed.

I got some food at the supermarket while I was in Rodney Bay and because I haven't eaten yet and it's already 7PM now, I'm going to have dinner now. And lime water and flu medicine. And then I shall sleep. Tomorrow, I'm sure, I'll be all better and the stories about the island will become more interesting.

Still glad I get to share my adventures with you, though, no matter if they're big or small.

Posted by isaontheway at 7:04 PM